The former CEO of CNN and the creator of its Crossfire show, Reese Schonfeld, has slammed the new CNN show that will be hosted by Kathleen Parker and Client Number Nine aka Eliot Spitzer. In his Huffington Post blog, Schonfeld not only blasts the proposed new show but provides some interesting background on the original Crossfire in its early years:

As the former CEO of CNN, and the creator of Crossfire (the show, not the name -- Paul Bissonette, CNN's PR man, came up with that), I think I'm qualified to comment on the new, not to be called Crossfire, television program created for Eliot Spitzer and Kathleen Parker.

To be blunt, I can't think of a worse idea. The original Crossfire featured Pat Buchanan and Tom Braden, whose name you rarely hear these days. The program was not intended as a shouting match -- our goal was to put the number one news maker of the day on CNN air at 10pm every night and to have him reply to questions from the right, Buchanan, and from the moderate left, Braden. The guest would be caught in the crossfire.

CNN Co-Founder: CNN Is at Risk of Becoming a Bad Joke 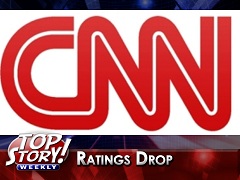 Just how bad have things gotten at the low rated CNN? So bad that the CNN co-founder, Reese Schonfeld has written in his Huffington Post blog that it is at risk of becoming a bad joke:

I think CNN is at risk of becoming a bad joke. Late night comics and cartoonists are already using them as a gag line. Newspapers are asking "experts" how to save them. It's time for a major change, before moving from "joke" to "tired joke". Writing this is getting tired, too. It's making me feel cruel, and, even if April is the cruelest month, I'd rather be writing about something else.

When last we left CNN co-founder, Reese Schonfeld, he was in a deep funk over the horrible ratings of the network he helped create. He had hoped that the election of Barack Obama as president would help that ailing network's ratings but, as reported by Schonfeld, a harsh reality quickly set in: