Talk about fake history. CBS Sunday Morning did a story on the Reconstruction era after the Civil War and former slaves who entered Congress in the 1870s. The visuals for the CBS segment used the political “red and blue” state graphics. But instead of following actual history, the network made the slave-holding Confederates red and the Union states blue.

Former President Bill Clinton appeared with co-author James Patterson on CBS News Sunday Morning to promote their new book The President Is Missing were the book deals with a cyber-attack and impeachment. While they were there, humorist and correspondent Mo Rocca questioned Clinton on the media’s coverage of President Trump and compared it to the coverage of President Obama. Clinton admitted the press loved Obama but suggest the press would be harsher if Trump were a Democrat.

VIDEO Late Night TV Producer: Trump’s America Reminds Me of What It Was Like Living in Concentration Camp

Longtime late night television producer Peter Lassally sat down with CBS News correspondent Mo Rocca on CBS’s Sunday Morning March 11, to discuss his illustrious life and career in Hollywood. Somehow along the way, Lassally found a way to insert President Trump into the somber conversation about what his life was like as a boy living in a concentration camp under Nazi rule.

The Catholic Church’s Diocese of Brooklyn is marketing its Christmas celebrations to millennial “hipsters” with an ad campaign focusing on concepts like nightclubs and selfies. One shows a church door with the slogan “Everyone’s on the list,” in contrast to an exclusive nightclub. Another shows an attractive brunette in glasses taking a selfie with the slogan “It’s Never Just a  Selfie,” and behind the woman is an image of Jesus Christ.

This marketing campaign became grist for secular-progressive mockery on Saturday on National Public Radio. The host of their game show “”Wait! Wait! Don’t Tell Me” suggested Jesus couldn’t take the selfie with the young lady because “his hands were occupied.”

Hope Over Experience: CBS Wonders If 'Wilson's League of Nations' Could Have Prevented World War 2

During a weekend leading up to President Obama making a more forceful case for war in Syria, CBS’s Sunday Morning was still pretending that Wilsonian internationalism could have prevented World War II.

Undeterred by his train-wreck on Cinco de Mayo, CBS gave comedian Mo Rocca another historical segment, this one on a new book by A. Scott Berg on President Woodrow Wilson. Rocca asked Berg if the League of Nations could have stopped war with Hitler. (After all, he had the potential to be such a reasonable fellow.)

CBS Sunday Morning decided to slip in a rather egregious Cinco de Mayo segment about the Mexican-American War (1846-48), in which most of the Western part of the United States was acquired under the Treaty of Guadalupe Hidalgo. Apparently, the occasion requires a seminar on how Cinco de Mayo is ruined by American imperialism.

CBS reported this was a “wicked” and “forgotten war,” built on presidential lies, and should resonate in the immigration debate -- because Americans don’t know that they’re living on land that was Mexico’s.

Like ABC, The Snobs at NPR Laugh At Shutdown of Hostess, the Snack-Food 'Supervillains'

On Friday, Scott Whitlock reported ABC's Good Morning America reported the morning show milked the 18,000 jobs lost in the shutdown of Hostess for laughs. The same laughing at pink slips occurred Saturday on National Public Radio's game show Wait Wait Don't Tell Me. Players were given a question after NPR newscaster Karl Kasell asked in a low growl "Where are you, you spongy yellow delicious bastards?"

Host Peter Sagal explained Kasell was delivering a Woody Harrelson line about Twinkies from the movie Zombieland. After a contestant answered that it was Hostess that shut down this week, Sagal started the wise cracks. "Hostess Incorporated, they make Twinkies, Ding-Dongs, Wonder Bread, Fudge Puppies, Fat Crammers, and Lard Bursts [laughter]...said they would liquidate the company if striking workers didn’t come back to work." Of course, there was also a Chris Christie joke:

On Friday's CBS This Morning, Gayle King sided with New York City Mayor Michael Bloomberg over his controversial proposed ban of soft drinks over 16 ounces in size: "I'm all for anything that's going to make us healthy." Guest Jonathan Waxman, a chef in the Big Apple, also endorsed the Bloomberg plan: "I'm kind of happy that someone's making a stand here, because I think that it's empty calories." [audio available here; video below the jump]

Guest anchor Mo Rocca raised the Bloomberg controversy near the end of the segment with Waxman, who once appeared as contestant on Bravo's Top Chef Masters program in 2010: "We have to ask you about what you think of Mayor Bloomberg's decree, his edict that...the big sugary drinks are out."

On Tuesday’s Joy Behar Show, HLN host Behar again suggested that an activity by the state of Arizona could be compared to Nazi Germany, as she discussed plans by the state’s education department to stiffen English-speaking requirements for teachers. Introducing the subject with comedians Mo Rocca and Colin Quinn, after taking a shot at former President Bush’s speaking skills, she asked does the requirement "remind you of any country, 1940ish?" Behar:

The Arizona Department of Education is cracking down on teachers with thick accents or who make grammatical errors when speaking. Well, there goes Snooki`s shot at teaching Algebra in Phoenix. Okay, and what about George Bush and his grammatical errors all those years? They are getting rid of teachers because they have accents in Arizona. Remind you of any country, 1940ish?

Over the past several weeks, during debates over Arizona’s attempt to enforce laws similar to federal immigration laws, Behar has repeatedly made direct and indirect references to Nazi Germany both on the Joy Behar Show and on ABC’s The View to disparage the Arizona law.

Below is a transcript of the relevant portion of the Tuesday, May 25, Joy Behar Show on HLN:

Behar on Anti-Palin Family Guy Scene: ‘I Agree With Sarah on This One’ 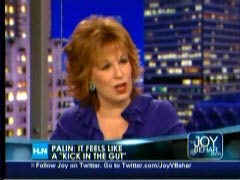 On Friday’s Joy Behar Show on CNN Headline News, the normally anti-Palin Behar and most panel members – all left-leaning – sided with the former Alaska governor in the aftermath of Family Guy producer Seth MacFarlane's controversial depiction of a character with Down's Syndrome on his Fox television show, intended as a swipe at Palin whose son has Down's Syndrome. Behar declared that "I agree with Sarah on this one," and, after showing a clip of Palin on FNC’s The O’Reilly Factor denouncing MacFarlane, Behar concluded the segment: "Okay, that’s one for Sarah."

Panel member Mo Rocca of the Daily Show on Comedy Central was unusually straight as he praised Palin: "I’m with her. I mean, look, if there’s one thing to admire Sarah Palin for, it’s that she’s raising a special needs child, so, yeah, it’s a virtuous, irreproachable thing."

Comedian Jessica Kirson also labeled MacFarlane’s crack at Palin as offensive even as she admitted to also finding it amusing: