Try not to laugh, but the Kennedy family giving a Profile in Courage award to Nancy Pelosi isn’t a partisan move. That’s the claim CBS Sunday Morning wants viewers to buy. Host Jane Pauley and reporter Martha Teichner previewed the 2019 award with Pauley haughtily insisting, “For 30 years, the Profile in Courage Award has been leading the way, honoring people for taking the high road.”

In the wake of the horrific racially motivated shooting on a historic African American church in Charleston, South Carolina last week, CBS News Sunday Morning hosted liberal New Republic editor Jamil Smith who argued that “black bodies are under assault” all across the country.

On Thursday, Mollie Hemingway of the GetReligion blog pointed out CBS's "major mistake" on the March 31, 2013 edition of Sunday Morning. On the Easter Sunday broadcast, Martha Teichner confused two biblical figures with the same name when she stated that "only one of the Gospels places Mary at the crucifixion, alongside the so-called 'beloved disciple' – possibly John the Baptist." Actually, the prophet was beheaded many months before Jesus' arrest.

During her report, Teichner also spotlighted the Broadway adaptation of Irish author Colm Toibin's novella "The Testament of Mary," which perverts the biblical Mary of Nazareth into an angry woman bitter over her son Jesus' execution and openly disdainful of His followers. [audio available here; video below the jump]

A noted Christian religious expert is the latest to confirm something careful watchers of the media have known for years: The American media is peddling New Age spirituality to its viewers as a substitute for traditional religion.

On January 24, the Christian Post reported that Ravi Zacharias, the founder of Ravi Zacharias International Ministries and a noted Christian apologist, warned that the mass media is trying to push New Age ideas on the general population in his book "Why Jesus? Rediscovering His Truth In an Age of Mass Marketed Spirituality."

CBS: The Rich to Blame For Bad Economy, Need to Pay Higher Taxes

By Kyle Drennen | September 27, 2010 5:18 PM EDT
On CBS's Sunday Morning, correspondent Martha Teichner promoted left-wing class warfare talking points from former Clinton Labor Secretary Robert Reich: "[He] in a new book points out another ominous parallel between the Great Depression and the 'Great Recession,' its cause." Reich proclaimed: "More and more of the income that was generated by the economy went to people at the top." [Audio available here]

Teichner worked to bolster Reich's argument: "In the last century, there were only two years, in 1928 just before the great crash, and then again in 2007, during which the richest 1% were taking home nearly a quarter of the entire income of the nation." Reich continued his assault on upper income earners: "Last year, when most Americans were suffering, the top 25 hedge fund managers each earned $1 billion. A billion dollars would pay the salaries of something like 20,000 teachers."

Again, Teichner made sure to back up Reich's assertions: "That wage inequality, Reich argues, is at the heart of our economic woes. And to fix things, we need to pay those teachers and the rest of the middle class more, not less, so they can spend enough to kick-start the economy. And yes, that means higher taxes for the rich." 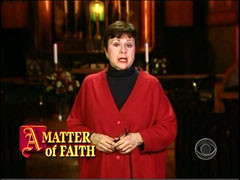 Reporting the lead story on CBS’s Sunday Morning, correspondent Martha Teichner touted a new on-line poll conducted by Parade magazine about religion in America: “nearly a quarter of the respondents call themselves spiritual, not religious. And how about this? Half the people polled say they seldom, if ever, attend religious services.”

One supposed religious expert Teichner spoke with about the poll findings was Barnard College professor and Episcopal priest Randall Balmer, who argued: “And so you have all these religious options out there and we Americans are good consumers.” Teichner asked: “So you’re saying that Americans choose their faith or their spirituality in very much the way they shop a mall.” Balmer replied: “I think they do.” In 2006, Balmer wrote Thy Kingdom Come: How the Religious Right Distorts the Faith and Threatens America.

The Parade magazine cover story about the poll was written by Christine Wicker, author of The Fall of the Evangelical Nation. In addition, Wicker is also a contributing writer for the left-wing blog The Huffington Post. Just days prior to the 2008 presidential election, Wicker authored a post entitled “Evangelical Leaders Using God Like a Hired Gun,” in which she claimed: “They tried branding Obama the anti-Christ. They tried linking him with Islamic terrorists....They’ve used their pulpits to endorse McCain...None of these tactics has brought their errant minions under control. So using God like a hired gun to terrorize the town’s people, the evangelical Christian mullahs are declaring that Obamageddon is at hand.”

Teichner dismissed that "angry opposition" by declaring: "Here’s a question. Do they even know what’s in the bills currently being considered by Congress? Do you?" Teichner and two liberal supporters of the Obama health care plan proceeded to educate viewers as to what was being proposed.

She spoke with former head of the left-wing group People for the American Way, Ralph Neas, now CEO of the supposedly "non-partisan" National Coalition on Health Care that is pushing for reform. In addition, Teichner spoke with University of North Carolina Professor Jonathan Oberlander, who in a July 22 article for the liberal British newspaper The Guardian wrote: "The Obama administration is pushing Congress to enact health reform legislation this year. And against all odds, Obama may pull it off....Obama’s election, after all, is a reminder that history is not always repeated. Sometimes it is made."

CBS: Patriotism a ‘Loaded Concept,’ Some Think ‘Harmful to Democracy’

On CBS’s Sunday Morning, correspondent Martha Teichner decided to try to define patriotism: "In reality, there may be no more loaded concept in the American political lexicon...The election will be a referendum on patriotism. One of campaign '08's central and most contentious issues." Teichner talked to liberal Brookings Institution analyst William Galston about the history of that "loaded concept": "It wasn't a question of one party or the other. It was President Truman, after all, who revived the idea of loyalty oaths and the legitimacy of imposing them." In the spirit of bipartisanship Teichner added: "Then there was Republican Senator Joseph McCarthy. His extremist views on loyalty and patriotism made his name synonymous with the political witch hunts of the 1950s."

Teichner went on to conclude: "Each side's arguments have hardened over time and become weapons in partisan battles." Her example: "Look at the damage the Swift Boat Veterans for Truth did to Senator John Kerry's presidential ambitions in 2004. Over the question of his patriotism." Teichner then examined a different take on patriotism: "Steven Johnston teaches political theory at the University of South Florida. He is outnumbered, but not alone, in believing that patriotism is actually a bad thing, harmful to democracy."

CBS Tribute to Norman Mailer, Who Said WTC ‘Had to Be Destroyed’

On CBS’s "Sunday Morning" this past weekend, reporter Martha Teichner did a profile of recently deceased ultra left-wing author, Norman Mailer, who she described as "... a hell of a big man for a short guy, scrappy, brilliant, controversial. Slugging away at life and letters until the very end." Of course, this was the same Norman Mailer that said of the World Trade Center in October 2001: "Everything wrong with America led to the point where the country built that tower of Babel, which consequently had to be destroyed."

Later Teichner remarked that "Mailer was unapologetically liberal, anti-war, anti-Nixon, anti-establishment." Well, he certainly was "anti-establishment" when he said to a "London Telegraph" reporter in February 2002, "America has an almost obscene infatuation with itself...The right wing benefitted so much from September 11 that, if I were still a conspiratorialist, I would believe they'd done it."

At another point, Teichner observed that "Norman Mailer loved playing the political provocateur." That proved true when in 2003, Mailer asserted to the "London Times" that, "Bush thought white American men needed to know they were still good at something. That's where Iraq came in...."