Interviews from NewsBusters at CPAC

There were many famous people at CPAC this year and I was lucky enough to run into some of them. And some of those I ran into even let me ask them a few questions about media bias. The resulting videos are embedded below the fold.

The four interviews I was able to get where with Joe the Plumber, John Ziegler, George Phillips, and Roger Simon. Each have unique experiences with liberal media bias and each articulated different but insightful points about the media.

Make sure you check out each of the videos and watch them all the way through.

Defensive Lauer Forced to Admit Palin Not An Idiot

Confronted by Sarah Palin documentarian John Ziegler, on Monday's "Today" show, NBC's Matt Lauer was forced to admit that the media perception of the Alaska governor as an "idiot" was "a lie." However Lauer displayed some disbelief that the media heavily pushed that line during the campaign as he professed, "I don't think that everybody in the media ran out saying, 'Sarah Palin is an idiot.'" Ziegler got the confession from Lauer, while promoting his film Media Malpractice, in the following exchange as aired during the 7:30 am half hour of the February 23, "Today" show [audio excerpt here]:

JOHN ZIEGLER: Oh wait a minute I, I urged people and I urge you Matt because you've been up to Wasilla. You, you know Sarah Palin. You know that this is a lie that she's some sort of an idiot or a moron.

MATT LAUER: No, no, no. Okay but that's, but that's an extreme state-

ZIEGLER: You know it! Tell, tell America right now what you know.

ZIEGLER: Is it not a lie that she's an idiot? You know it Matt. 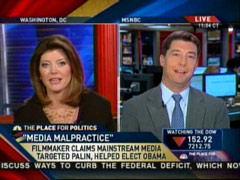 During the Monday 12PM EST hour of MSNBC news coverage, anchor Norah O’Donnell interviewed conservative film maker John Ziegler, creator of ‘Media Malpractice,’ a documentary on media bias against Sarah Palin, and denied any such bias: "Well, let me ask you, you called the treatment of Sarah Palin and her family a, quote, 'media assassination, one of the greatest public injustices of our time.' Is that a little strong? Are you and her a little thin-skinned?"

Ziegler responded by pointing out O’Donnell’s own anti-Palin bias: "The evidence is overwhelming. It's continuing today. I mean, just a few weeks ago, Norah, you incorrectly stated on the air Sarah Palin called Barack Obama a terrorist during the campaign." NewsBusters reported on O’Donnell’s January 29 smear of Palin.

O’Donnell criticized part of Ziegler’s documentary: "Let me ask you, in your documentary you cite examples of media bias by Saturday Night Live, that that's media bias. Aren't those comedians?...How's that media bias?" Ziegler explained: "Poll after poll shows that more people get their news from comedy shows because the line between entertainment and news, as this network has shown time and time again, has virtually evaporated...MSNBC used to be a news organization, now it's an advocacy organization, and SNL is actually thought to be a news organization."

Marvelously entitled "Media Malpractice: How Obama Got Elected and Palin Was Targeted," the movie is set for release on February 23.

I chatted with Ziegler earlier in the week about last year's campaign shenanigans and the film. Some of the highlights include (60-minute audio available here):

Ziegler and Shuster Fight Over Palin, Round Two

Round one between MSNBC's David Shuster and Sarah Palin documentarian John Ziegler was delicious.

Round two, which took place later in the day Friday on "1600 Pennsylvania Ave," was a tad less contentious, but still quite entertaining.

Pay particular attention to the moment at 6:10 when Shuster actually says:

Shuster missed the delicious irony in that being exactly what he and the rest of the Obama-loving media did with the president-elect the last two years (video embedded below the fold, h/t Hot Air):

MSNBC's Shuster Called 'A Joke' For His Anti-Sarah Palin Bias

Appearing on MSNBC to discuss video clips of an interview that he did with the Alaska governor Monday, Ziegler got into a rather contentious exchange with Shuster claiming "this network played an enormous role" in the character assassination of Palin during last year's presidential campaign, and definitively stated "MSNBC is clearly the pet network of Barack Obama."

Shuster followed this up by falsely claiming (video embedded below the fold, h/t TVNewser):

In it, Palin answers -- with her characteristically delicious candor! -- how she felt about the media's coverage of her family, as well as the Katie Couric interview and Tina Fey's parodies.

In his article about his meeting with Palin, Ziegler offered his own castigation of the press's abysmal performance during the 2008 presidential campaign:

Former Clinton Administration officials and liberal news media personalities who have been sharply critical of the "The Path to 9/11" miniseries fail to point out that top executives, editors and researchers connected with the docudrama ,who are actually quite left of center themselves, were supportive of the project, according to a new film that explores the controversy.

"The Path to 9/11" is a two part ABC television miniseries that aired on Sept. 10 and 11 in 2006. It is based in part on the 9/11 commission report and presents viewers with a dramatization of the events that lead up to the terrorist attacks in New York and Washington D.C. in 2001. The film highlights the U.S. government's ineffective response to terrorism in the 1990s and in the first few months of the Bush administration.

To suggest the "The Path" was conceived for the purpose of singling out and smearing the former president as part of a "right wing hit piece" aimed against the former president simply does not square with reality, since the project was launched and conceived by several openly liberal ABC executives the new film explains.