At the end of Tuesday's Erin Burnett Outfront on CNN, the show ran a full two-minute report by correspondent Jeanne Moos which took parting shots and mocked General Michael Flynn over his resignation as the Trump administration National Security Advisor. Detailing social media users who have piled on jokes about how soon he was forced out, Moos noted that one of Kim Kardashian's short-lived marriages lasted longer, and included a snide tweet from someone citing fungal infections.

On Monday's CNN Newsroom, Jeanne Moos zeroed in on the largely-negative response to a pro-Hillary Clinton super PAC's music video-style ad, which features a country music song about the former First Lady. Moos wasted little time before reporting that "at least one website warns, 'This pro-Hillary cowboy anthem will make your ears bleed.'"

As NewsBusters has reported, CNN's Carol Costello is very defensive about ObamaCare.

On Wednesday, she took exception to a pre-Thanksgiving Day joke special correspondent Jeanne Moos made about Healthcare.gov being a turkey (video follows with transcribed highlights and commentary):

The liberal hosts on MSNBC  just couldn't get enough of watching U.S. Sen. Marco Rubio reach for a glass of water and take a sip during his rebuttal of President Barack Obama's State of the Union address, airing the snippet a staggering 155 times during the Wednesday broadcast schedule, according to a tally by the Daily Caller.

Other cable news networks showed the footage far less often. CNN aired it 34 times, and Fox News Channel played it just 12 times -- all of which took place on “The O’Reilly Factor” and “Hannity” while the hosts discussed the media's obsession with the Florida Republican's “watergate” incident.

Hypocritically, NBC News has still not informed viewers of President Obama's horrible error last Thursday when he said he had awarded a Medal of Honor in person to a living soldier who actually had been killed in Afghanistan in 2006 (video follows with transcript and commentary):

By Matthew Balan | August 10, 2010 7:48 PM EDT
On Tuesday's American Morning, CNN's Jeanne Moos picked up on the viral video of Boy Scouts booing President Obama's taped message to the recent National Jamboree, but got in a light jab at the youth for their behavior: "Booing would seem to go against some of the 12 tenets of Boy Scout Law. A Boy Scout is 'trustworthy, loyal, helpful, friendly, courteous, kind'- wait a minute, 'courteous and kind'?"

The correspondent, known for her light reports for the network, concluded the 6 am Eastern hour with "unique take" on the video, as anchor John Roberts put it. Moos noted that "45,000 Scouts were celebrating the 100th anniversary of Scouting" in the United States at the Jamboree, which was held at the U.S. Army's Fort A.P. Hill in Virginia, and that "two months earlier, the White House informed the Scouts that the President had prior commitments."

Moos continued that the "Scouts...booed the President's message, and this 23-second video made its way on to conservative websites, which slammed the President for forsaking the Boy Scouts to appear on 'The View.'" She later gave the Obama administration's explanation for the apparent snub: "The White House says 'The View' had nothing to do with it- that the President was already scheduled to be on the road that day." 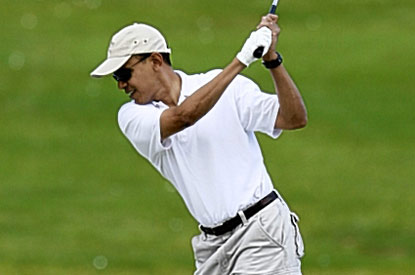 By Alex Fitzsimmons | June 22, 2010 12:20 PM EDT
CNN correspondent Jeanne Moos has a penchant for quirky, off-beat reporting, but what happens when the eccentric newswoman gives a more accurate picture of important events than the serious journalists?

It was left to CNN's resident humorist to connect the dots.

"It's the yachting versus golf smack down, round one," declared Moos. "BP's CEO gets pummeled for taking a day off to watch his yacht race...CBS White House correspondent Mark Knoller says already President Obama has played 39 rounds of golf, compared to the 24 George Bush played his entire presidency."

By Matthew Balan | December 16, 2009 6:54 PM EST
On Wednesday’s Situation Room, CNN correspondent Jeanne Moos exposed some of the left-wing rage being directed at Senator Joe Lieberman, especially on the Internet. Moos’s examples of “liberal hate” at the Connecticut politician ranged from fantasy Hanukkah gifts, such as a muzzle, to a YouTube video of a woman having her cats attack a string which stood in for the senator [Moos's full report is available here].

The correspondent’s latest light report for CNN highlighted Liberman’s “new low among liberals.” Along with the multiple examples of leftists mocking the senator on YouTube.com, Moos noted the strong reactions from “progressive radio hosts,” such as Mike Malloy, and attacks on liberal blogs like The Huffington Post and Daily Kos:

CNN Anchor Rick Sanchez Is Assembling a Pile of Retractions

Rich Noyes noted earlier that CNN's Rick Sanchez stated via Twitter what he couldn't say on the air because of the overdone "Balloon Boy" fracas. He was sorry he aired fabricated Rush Limbaugh quotes:

i've know rush. in person,i like him. his rhetoric,however is inexcusably divisive. he's right tho. we didn't confirm quote. our bad.

CNN correspondent Jeanne Moos devoted an entire segment to the viral Obama as the Joker image on Tuesday’s Situation Room, and zeroed in on man-on-the-street reactions to it, all of whom expressed leftist horror at the picture. Moos herself suggested that “maybe it’s time to give the Joker joke a rest.” NewsBusters.org and Noel Sheppard's initial post about the posters made a brief appearance during her segment [audio from the entire segment is available here].

The correspondent, who is known for her light and sometimes humorous reports for CNN, chronicled how the Photoshop-style image of the president as Batman’s nemesis is spreading like wildfire on conservative websites, including the Drudge Report and NewsBusters. Throughout the report, she played clips of five men and six women whom the correspondent approached on a New York City street for their reaction to the Joker image. Unsurprisingly, all of the New Yorkers reacted negatively, from an “Oh my goodness” to “shame on them.” The last man stated that he was reminded of racist black-face comedy from the past, and the last woman even shouted, “It’s a right-wing spin- it’s disgraceful, and you shouldn’t even bring any attention to it.”

CNN has corrected a bogus story the network's Rick Sanchez pathetically aired Wednesday about leaders at last Saturday's G20 meeting snubbing President Bush as if he had "cooties."

For those that missed it, Sanchez played a video (embedded below the fold) of Bush seemingly being ignored by most of the leaders of the free world as they lined up to take a group picture:

I want you to look at this video, all right. It seems almost sad. Look at this. This is the president of the United States walking out on stage to take a picture with world leaders invited to the G20 summit over the weekend. Look at him. And he seems like the most unpopular kid in high school that nobody liked -- you know, the one with the cooties?

Actually, what seems sad, Rick, is that as your colleague Jeanne Moos reported Friday, you didn't know what you were talking about (video embedded right, h/t Hot Air via NBer R D Helms):