James Taranto could be the best columnist around.  Every day at his Best of the Web at the Wall Street Journal online, Taranto turns out an original, often unconventional, conservative take on the news, regularly managing to leaven the message with humor.

Rush today rightly extolled Taranto's column of yesterday, in which he made the point that there is a vast, inherent difference between private and public sector unions.  In the former case, unions are negotiating against corporate interests. In the latter, unions are, by definition, organizing against the interests of the public itself.

Surely even Cenk Uygur understands this.  So when Cenk suggests, as he did on his MSNBC show this evening, that without unions public employees would be "at the mercy" of "corporate executives," it seems fair to accuse him of . . . fraud.

James Taranto, who writes the “Best of the Web” column for the Wall Street Journal online, continues to be on fire on the subject of New York Times hypocrisy over “violent” political rhetoric. His Monday column opened with another moral excoriation of the Times, based on its Saturday editorial endorsing the latest cause from Common Cause, a left-wing advocacy group. An excerpt:

After arguing that “Common Cause's complaint is not only meritless but frivolous,” Taranto quoted a damning excerpt from the Times editorial.

Justice Scalia, who is sometimes called "the Justice from the Tea Party," met behind closed doors on Capitol Hill to talk about the Constitution with a group of representatives led by Representative Michele Bachmann of the House Tea Party Caucus.

Then he really got tough on the Times.

Two of the conservative opinion world’s heavyweights, humorist P.J. O’Rourke and Wall Street Journal writer James Taranto, both have responded in passionate, even moral fashion to the New York Times’s often disgraceful coverage of the Tucson shootings, in which six people were killed and Congresswoman Gabrielle Giffords was severely injured.

In their view, the Times used the tragedy to play political blame games against conservative politicians and talk show hosts. O'Rourke condemned the Times for "shameful," "ugly and offensive" reporting, while Taranto accused the Times of "reckless disregard for the truth."

First, some highlights from P.J. O’Rourke’s scathing take on the Times’ decline in the January 24 edition of The Weekly Standard, “The Times Loses It.”

WaPo Columnist on CNN: 'How Much Time Do We Have Left to Talk About How Stupid Sarah Palin Is?'

The Washington Post had better refrain from telling other media outlets to tone down their rhetoric, for on Sunday, one of the paper's longest running columnists asked on national television, "How much time do we have left to talk about how stupid Sarah Palin is?"

Such was said by Richard Cohen, a man that has been with the Post since 1968, towards the end of CNN's "Fareed Zakaria GPS" (video follows with transcript and commentary):

I am serious. If the art of Ofili, the British-born hustler, were reported as not art but animal waste, he might have learned the rudiments of art a long time ago and become an acceptable street artiste. If Biden were reported to have bungled yet again, he might not say such idiotic things. According to the Taranto Principle, biased liberal reporting brings out the worst in liberals and makes them ridiculous and often unelectable.

Taranto: Obama Likes First Amendment for Mosque, Why Not for Fox?

In light of President Barack Obama's recent attack on the Fox News Channel, the Wall Street Journal's James Taranto wonders: "why is the Ground Zero mosque the only case in which Obama has ever defended anyone's First Amendment rights without qualification?"

There are a number of possible answers, and at least some of them are reasonable and worthy of media attention. And indeed, a few journalists have noticed and raised objection to the White House's selective contempt for opinion media - Fox is "destructive," but MSNBC libtalkers Rachel Maddow and Keith Olbermann "provide an invaluable service."

But there is a deeper First Amendment double standard at work here, as Taranto notes: 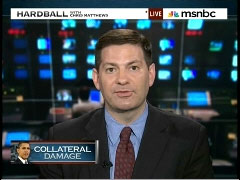 James Taranto at the Wall Street Journal pointed out in his "Best of the Web Today" review on Thursday how Mark Halperin of Time seems to disagree so vehemently with himself about how the Obama presidency was supposed to unfold this year. Why would Obama delay business-tax-cut talk until the fall, for example:

It is fair to ask (and many Democrats have) why the President is only now proposing such critical measures, rather than offering them up earlier in his term, before election-season politics brought governing to a standstill.

It's fair to answer, too. While Americans were anxious about the economy, Obama was obsessed with wrecking our health care. He was urged on by cheerleaders in the media like the one who wrote an article on March 22, the day after the House passed ObamaCare, which began as follows:

Feingold On His Tough Re-Election Race: I Blame George Bush!

By Mark Finkelstein | September 2, 2010 8:58 PM EDT
A recurring rubric at James Taranto's Best of the Web Today column at the Wall Street Journal online is "We Blame George W. Bush," for tongue-in-cheek blaming of the former prez for things palpably beyond his purview. Let's add another item to the list.  Dem senator Russ Feingold has blamed his tough re-election race on, yes, W.

Let's think about that. If Bush were such a bad president.  If his policies were so disastrous for the country. Wouldn't that boost the chances of an incumbent Dem senator who, like Feingold, had voted against Bush policies every step of the way?

Hey, I don't try to understand Dem reasoning: I just report it.  Feingold made his logic-defying allegation on this evening's Ed Show.

The mainstream media is of course replete with liberal opinionistas who criticize Republicans far more harshly than Democrats. That is nothing new. It is truly shocking, however, when supposedly "objective" news outlets employ even more egregious double standards than the openly-biased commentators.

The Wall Street Journal's James Taranto caught the Associated Press employing one such double standard over the weekend. The AP's Ben Feller penned quite a sob story about the president's response to the Gulf spill, saying that Obama is "having to work through unforeseen problems" and made sure to note that his "ability to calmly handle many competing issues simultaneously is viewed as one of his strengths."

A contrast with the AP's rheotroic on the Bush administration's response to Hurricane Katrina reveals quite a discrepany in the organization's views on the executive's accountability for natural disasters. That New York Times columnist Frank Rich and uber-liberal mudslinger Bill Maher have both had harsher words for the current president and his response to the Gulf spill speaks volumes.

By Lachlan Markay | May 3, 2010 6:49 PM EDT
A number of media outlets continue to hold water for the weekend's pro-illegal immigration protesters, as NewsBusters has reported, painting violence at many rallies as somehow unexpected or not representative of the larger movement.

While that characterization may be fair, the benefit of the doubt afforded to immigration protesters by some of the nation's leading media outlets stands in stark contrast to the coverage of Tea Party protests by those same outlets. Tea Parties rallies are guilty until proven innocent in the eyes of the mainstream media.

"[W]hat started as a peaceful immigrants' rights march in downtown Santa Cruz turned violent, requiring police to call other agencies for help, authorities said," read the lede of an Associated Press report. Since no Tea Party rally has turned violent, we can't make a direct comparison. But it is safe to assume that a Tea Party protest looking like the one at top right -- and involving numerous incidents of vandalism and other crimes -- would be characterized simply as "violent" or some other ugly adjective. 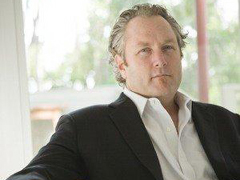 In an interview with the Wall Street Journal on Friday, Andrew Breitbart, founder of such center-right online powerhouses as Big Government and Big Hollywood, blasted what he dubs the "Democrat-media complex." He spoke of his most recent exposes on the administration's political malfeasance and the mainstream media's refusal to cover those scandals.

Breitbart rocketed into the national spotlight with his work with James O'Keefe and Hannah Giles, the young conservatives responsible for the ground-breaking ACORN sting operations that led to congressional votes to de-fund the community organizing group.

"I had a 20-year-old and a 25-year-old and my integrity on the line if we were going to launch this," Mr. Breitbart says. "It was so obvious that the mainstream media, given this information, would not cover it and would, in effect, attempt to cover it up." So he devised an intricate strategy of rolling out the videos one at a time, anticipating Acorn's defenses and rebutting each in turn with the next video...