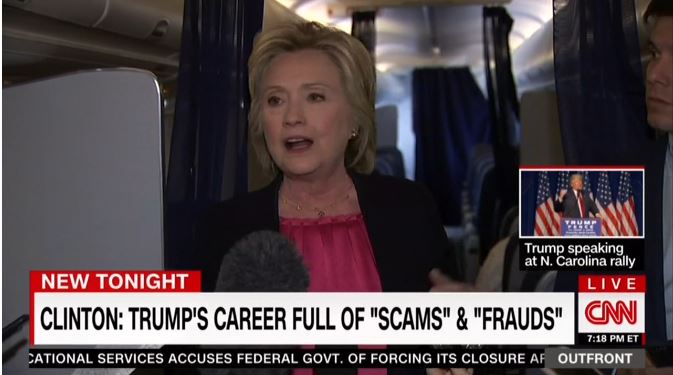 Early Wednesday afternoon, Washington Post writer Chris Cillizza attempted to silence those who pointed out his massive double standard in reporting about the health of Republican Senator John McCain (Ariz.) during the 2008 presidential campaign and his rampant dismissal of any doubts being raised about Hillary Clinton’s physical state here in 2016.

Needless to say, his mocking of those who exposed him with lines like “thanks for playing” and a sarcastic line about being busted fell flat as individuals like the astute James Taranto of The Wall Street Journal brought up how Cillizza left out in his Wednesday piece a story he did in 2013 about Clinton following her now-infamous concussion and blood clot.

“Within seconds of my post arguing that talk of Hillary Clinton's health problems was totally without merit going live on Tuesday, conservatives on Twitter — it's a micro-blogging site — immediately seized on a piece I had written back in 2008 about John McCain's health as an issue in the campaign,” Cillizza began before posting some tweets he could show “in this family blog.”

Taking a shot at such critics who cited his 2008 piece, he joked that he was “busted” and provided a link to the one in question opining about the McCain campaign’s decision to give the Associated Press in May 2008 a peak at over 1,000 pages of his health records ranging from the injuries he suffered while a POW in Vietnam to his bout in that decade with cancer.

Cillizza chose not to provide an excerpt of his analysis but the Post’s hard-news version instead, so here’s two short but important points I was able to exhume from the May 23, 2008 article:

McCain's health has long been a topic of discussion in the campaign due to his advanced age — he will be 72 by the time of the November election — and his past medical problems.

But, the Arizona senator's campaign is well aware that concerns about whether he is well enough and up to the job are potentially perilous for a candidate seeking to win the age versus experience battle with youthful Sen. Barack Obama (Ill.) in the fall.

What seems clear from the early hours of the health story is that no smoking gun exists. (An Important Note: The Fix has not reviewed the documents and is simply using the Associated Press, which has done so, for guidance.) That does not mean that the McCain campaign is entirely out of the woods, however. Thousands of eyes will be perusing these documents over the next few hours and days and it's possible that something (or some things) will be found that will keep the story alive heading into the fall.

So, based on this account, Cillizza spun the McCain story as a legitimate issue.

Fast-forwarding to the present, he lamented that “[w]e are talking about — and I am/was writing about — apples and oranges” and while “it's easy to ascribe the difference in coverage to personal bias,” he ruled that people are still wrong to bring up Clinton’s state and threw in an absolutely pathetic argument that Hillary being three years younger than McCain if he had been elected:

Rewind back to the 2008 presidential campaign. And remember that McCain, if elected, would have been 72 years old — the oldest person ever to be elected president. Had he served two terms, McCain would have left office at 80.

That fact alone made his health a major issue in the context of the campaign.

Clinton is 68 years old. (She will be 69 on Oct. 26.) She is running against someone who is 70. (Obama was 47 years old in the 2008 campaign.) Clinton has never had cancer. She suffered a concussion from a fall as a result of a stomach ailment. (If you believe that is a cover story for the "real" truth, I would say: More power to you. But conjecture isn't facts.) Cancer ? concussion. It just doesn't.

Later, Cillizza made a lame attempt at a mic-drop moment in his conclusion, again saying “apples, meet oranges” and “thanks for playing,” but even this effort fell flat as he pitifully ignored a January 2, 2013 entry to his Fix blog:

But, even if Clinton has no long-term effects from this health scare, it will, without question, influence how she is covered if she decides to run for president in 2016.

2. This is the second time in the past 15 years that Clinton has had a blood clot issue. The first episode, which was significantly less serious, was in 1998 when she was treated for a blood clot in her leg.

Add those two factors up and it's clear that Clinton will have to answer lots -- and lots -- of questions about her health if she decides to get into the next race for president.

So, Chris, your own bar that their health is “one of the first hurdles any prospective candidate must clear” and yet three years later, Clinton’s health (clots, coughs, and all) is no longer “a major topic of discussion?”

I’ll be awaiting your response.