After Juan Williams made a bizarre claim on Fox News Sunday that conservatives "live in a very small bubble including a media bubble," Perino fired back, "Juan, Democrats and the liberals live in the biggest mainstream media bubble ever created in the history of the universe" (video follows with transcript and absolutely no need for additional commentary):

MSNBC's Martin Bashir on Tuesday called Fox News commentators and Rush Limbaugh a "river of sewage" and a "sewer of absolute crap."

This from the man with some of the consistently lowest ratings on all of cable news (video follows with transcribed lowlights and commentary):

Former Barack Obama senior advisor David Axelrod on Tuesday demonstrated why it's absurd for him to have been hired by NBC News at the beginning of his previous boss's second term.

Appearing on Morning Joe, Axelrod struck back at CBS's Bob Schieffer for his criticism of the White House on Sunday's Face the Nation (video follows with transcript and commentary):

Fox's Ed Henry: Colleagues Cheered Me On When I Grilled Bush Administration - They Don't Now

Fox News senior White House correspondent Ed Henry said Friday that when he used to grill George W. Bush press secretaries Dana Perino and the late Tony Snow when he was working for CNN, his colleagues cheered him on in private.

"Then when I was at Fox covering the Obama administration," he told conservative radio host Laura Ingraham, "it can get a little bit lonely sometimes" (video follows with transcript and commentary):

Greg Gutfeld on America: 'Obama is Nero, Media is the Fiddle, and We are Rome'

Fox News's Greg Gutfeld made a statement about the relationship between President Obama, the media, and America on Wednesday's The Five that deserves serious consideration.

"Obama is Nero, media is the fiddle, and we are Rome" (video follows with transcript and commentary):

As part of the Fox News Channel's coverage of the dedication of the George W. Bush Presidential Library and Museum in Texas on Thursday, Dana Perino, co-host of the channel's “The Five” weekday program and a White House press secretary for the 43rd president, interviewed her former boss “not to break any news here” but for viewers to meet and get to know him “as I do.”

That seven-minute discussion immediately drew fire from Howard Kurtz of CNN and the liberal Daily Beast website. He asked on the Tweeter social site whether the softball interview might have made a “mockery” of Fox's coverage of the event.

MSNBC's Wolffe: Before 9/11, Bush 'Ignored All the Warnings About Al-Qaeda'

On Wednesday's The Last Word with Lawrence O'Donnell, MSNBC analyst Richard Wolffe -- formerly of Newsweek -- claimed that President Bush "ignored all the warnings about al-Qaeda wanting to attack the homeland" before 9/11 as he mocked Republicans for praising Bush's record of preventing terrorist attacks on U.S. soil after the 9/11 attacks. As he alluded to Republicans criticizing President Clinton for not handling al-Qaeda more aggressively during his presidency, Wolffe asserted:

Greg Gutfeld: 'Jim Carrey Is the Most Pathetic Tool on the Face of the Earth'

Later that day, Fox News's Greg Gutfeld and his co-hosts at The Five thoroughly trashed Carrey (video follows with LexisNexis transcript and absolutely no need for additional commentary):

In what has become a recurring theme on MSNBC, liberal panelists will find some way of attacking Republicans for a completely unrelated issue.  The latest example is the tragic murder-suicide involving NFL player Javon Belcher last week, which MSNBC’s Karen Finney used to smear Republicans in Congress, not over gun control -- that would be too predictable -- but, you guessed it, the "war on women."

Appearing on Friday’s Martin Bashir, Finney -- a NARAL Pro-Choice America board member who's fine with violence against unborn girls --  and the entire liberal panel slammed Republicans in the House for failure to pass the Violence Against Women Act, arguing that passage of that bill could have prevented Jovan Belcher from murdering his girlfriend.   [See video below page break.]

Bob Beckel Wrestles With the Past Tense of 'Tweet' - Loses Badly

The outrage concerning New York Times columnist Paul Krugman's disgusting comments on the tenth anniversary of 9/11 came from all quarters of the political arena Monday.

Never one to mince words, Fox News's Greg Gutfeld on "The Five" said what many Americans were feeling about this liberal sociopath, "Go to hell, Paul Krugman, you bearded, bitter buffoon" (video follows with transcript and commentary): 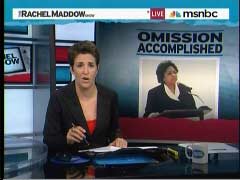 On Tuesday’s Rachel Maddow Show on MSNBC, as host Maddow complained that a video clip of former USDA official Shirley Sherrod had been edited to make it appear that she currently has a tendency to discriminate against white farmers at USDA – a clip that led to her firing by the Obama administration – the MSNBC host not only incorrectly claimed that FNC coverage of the clip had helped incite her firing, but she also suggested that FNC would never show her side of the story even though, by that time Tuesday night, several FNC shows had already informed viewers of some of the details in Sherrod’s favor. And, in fact, Sherrod had already been forced to resign before the O’Reilly Factor became the first FNC show to report the story of her comments on Monday night, although host Bill O’Reilly at the time did not realize she had already been fired.

Maddow’s show even chose to only present to her viewers clips from FNC that ran Monday and Tuesday morning which portrayed Sherrod’s comments as racist, without airing any of the clips from shows later Tuesday which showed FNC personalities conveying more of her side of the story. As Maddow filled in her viewers on some of the details in Sherrod’s favor, the MSNBC host used such phrases as "you would never know this if you got all your information from Fox News," and, after explaining that Sherrod, in fact, helped the white farmers in question, she added: "That`s what happened – unless, of course, you watch Fox News." FNC had already reported most of those same details hours earlier, and O’Reilly even informed his viewers Tuesday that Sherrod had declined an invitation to appear as a guest on his show, so liberal FNC analyst Alan Colmes appeared in her place.