Candice Bergen Doesn't Like John Edwards, and Hates the Other Woman

The website Women on the Web (Wow-o-Wow) convened a little forum last Friday about whether Elizabeth Edwards is right to stay with her adulterous husband. Sesame Street creator Joan Ganz Cooney expressed a distaste for Elizabeth's creation of a spectacle that's clearly not coming from Oprah Winfrey or Larry King or other publicists of Elizabeth's new opus: "I think she is making a mistake writing a book about the affair and publicizing it.

According to "Nightline" co-anchor Cynthia McFadden, during the 2008 presidential campaign "many in the media" saw Barack Obama as a "bright hope in the distance." The ABC journalist made that admission during a "Morning Media Menu" podcast interview with TV Newser editor Steve Krakauer on Tuesday. In a justifying tone, she quickly added, "It's also clear that a lot of Americans thought that." McFadden didn't explain if she felt it was the role of journalists to simply reflect public will. [click play button in embed at right for audio excerpt]

The discussion on Obama media bias was prompted by Krakauer's mention of the new Bernie Goldberg book on the same subject, "A Slobbering Love Affair." Defending fellow co-anchor Terry Moran, McFadden asserted, "Anyone who knows Terry and his work would say there's nothing slobbering about him. I mean, he's as tough as they come. I think he brought a very jaundiced eye to the campaign." In actuality, with a few notable exceptions, Moran frequently slobbered over Barack Obama.

On November 6, 2006, he famously gushed that Obama was "an American political phenomenon" and, perhaps hopefully, he wondered, "Is Barack Obama the man, the black man, who could lead the Democrats back to the White House and maybe even unite the country?"

The inauguration of the first African-American president is an historic affair, one that should be properly celebrated by all. But when the so-called "objective" network anchors begin comparing a routine political ceremony to a spiritual awakening, have they gone too far?

"Sacred." "Majesty." "Sacrament."  "Pilgrimage." These are words loaded with religious and spiritual meaning. And they're words used to describe the inauguration of President Barack Obama by CBS, NBC and ABC anchors on their evening and mornings news shows.

'Nightline' Hosts Gush Over Idea of Caroline Kennedy as Senator

"Nightline" anchor Cynthia McFadden and ABC reporter John Donvan on Monday gushed over the possibility that Caroline Kennedy could replace Hillary Clinton as the senator from New York. McFadden (see file photo at right) teased the segment by cooing, "So, is another chapter in the Camelot story about to be written?"

Donvan repeatedly mentioned that Caroline Kennedy wouldn't have much experience for such a post. But, he didn't seem bothered at all by this, at one point stating, "All she will have at first is that name. But, at least she has kept it the way it was remembered, as part of a story that so many wanted to believe in." Contrast this with the coverage vice presidential candidate Sarah Palin received over a perceived lack of experience. Certainly, the media were not as forgiving for a non-Kennedy such as the governor of Alaska.

Donvan contributed the requisite vapid reminiscing of the Kennedy years. The ABC journalist described Washington D.C. as a place "where, when her dad was the president, we first came to know the little girl, riding his shoulders, saddled up on ponies."

Cynthia McFadden to Clinton: Comparisons to Palin Must 'Rankle You'

On Tuesday's "Nightline," co-anchor Cynthia McFadden conducted her second interview this week with Hillary Clinton and, once again, offered no policy questions and focused only on pushing the New York senator to bash Governor Sarah Palin. The liberal journalist repeatedly questioned, five times in total, variations on whether or not Palin is qualified or good for women. At one point she even asserted, "But it must rankle you, I mean, to be compared to Sarah Palin."

Below are McFadden's (unsuccessful) attempts to get Clinton to slam the Republican vice presidential nominee.

MCFADDEN: I feel like you're bending over backwards. I mean, I feel in some ways as if a man with the qualifications that Sarah Palin brings to this role, you'd have no problem with taking the gloves off and saying, hold it just a second.

MCFADDEN: Is she ready to serve as commander in chief, senator?

MCFADDEN: Does she deserve, does she have the right to stand on your shoulders in this regard?

"Nightline" co-anchor Cynthia McFadden on Monday used the opportunity of the first dual interview with Barack Obama and Hillary Clinton to gush over the two Democrats and offer no challenging questions. Speaking to the senators after a campaign rally in Florida, she fawned, "You looked pretty good up there together." The co-anchor also excitedly tossed this softball to Clinton and Obama: "Are you going to win? Are you going to win down here?"

Fully embracing Democratic talking points that the two once-bitter rivals are now friendly, McFadden fawned, "...Two weeks before the presidential election, they genuinely seemed to have bonded over their singular mission to put a Democrat in the White House." (Is that McFadden's mission too?)

Offering amateur psychology, the ABC host wondered, "How does it feel today? Still a little awkward or have we gotten over the awkward period in the relationship?" McFadden presented no questions about Obama running mate Joe Biden's assertion on Sunday that the Illinois senator would be tested by a major international crisis in the first six months of his potential presidency. In addition, there were no questions about terrorist bomber William Ayers or any other serious issue.

ABC Ignores Own Scoop on Biden for Almost 24 Hours 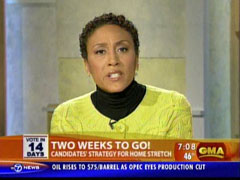 Despite featuring the story on its "Political Radar" blog on Monday morning, the ABC network ignored for almost 24 hours the claim by Democratic vice presidential nominee Joe Biden that Barack Obama will be tested by a major international crisis in the first (potential) six months of his presidency.

"Nightline" co-anchor Cynthia McFadden interviewed Pastor Rick Warren on Monday about the presidential forum he held with Senators Barack Obama and John McCain and pestered him to just admit that he's a Republican. At one point, she goaded, "You know, there are some people who feel that this is kind of a sham operation. That really, we know you, as an evangelical, are a Republican, a John McCain supporter."

Warren responded by asserting he's a registered independent, but the ABC correspondent kept trying to pin the pastor and author down as a GOP supporter. Speaking of Warren's parishioners and his own preference, she queried, "But do you feel like at some point, Rick, you owe the people who look to you for guidance more than that? I mean at some point before this election are you going to get up--" After Warren interrupted and replied that he wouldn't be telling anyone who to vote for, McFadden followed-up: "So if someone were to come to you and say, you know what, forget character, I'm going to vote for the guy who is opposed to abortion, would you say they need to go back and think a little harder?"

Cynthia McFadden didn't exactly say John McCain had no character, but she certainly implied it. In an interview with Pastor Rick Warren on ABC's "Nightline," McFadden was trying to get Warren to indicate if he would counsel his flock on who to vote for, and what he would say to people who say "forget character," pick the pro-lifer.

The feature on Warren came after the pastor's Civic Forum on the Presidency held over the weekend at his 22,000-member church in southern California. McFadden asked Warren if he "owed" it to "people who look up to you" to tell them for whom he was voting .

On Wednesday, "Nightline" co-host Cynthia McFadden and correspondent David Wright condescendingly reported on the disparity in the media's coverage of Barack Obama and John McCain. McFadden began a segment on the Arizona senator by snidely asserting, "Now, if you have a younger sibling, you can probably relate to what Senator John McCain has been going through this week. Whatever he does, everybody seems to be talking about the new kid in town."

Expanding on a report he filed for the July 23 "World News," Wright, in an almost embarrassed tone, remarked, "Pity the poor Straight Talk Express. While, Barack Obama is off globe-trotting, grabbing all that high profile, high octane attention, we're here on the tarmac in Allentown, Pennsylvania." He also described the media's obsession with Obama in a passive tone, asking McCain, "Do you kind of feel like you're going to be stuck playing defense from now until November?" and stating, "...It seems like the narrative of this campaign is being driven by whatever Senator Obama does and you're left to kind of react to that." Wright confidently predicted that in the next few days, "What can you almost guarantee he [McCain] will be talking about? Obama." Something, one assumes, people like David Wright will make happen.

The Goo Is Over? ABC Pounds Hillary on Gas Taxes, Iran, Wright 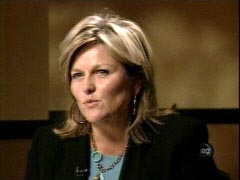 ABC’s Nightline featured yet another Cynthia McFadden trip with Hillary Clinton on the campaign trail Thursday, but it wasn’t all sympathetic questions about how hard it is to be a feminist pioneer.

President George W. Bush’s days in the White House may be numbered, but that isn’t stopping the media from taking a few cheap shots on the way out. ABC’s April 21 “Nightline” reported on the increased cost of gasoline, but did so in terms of the Bush presidency.

“Tonight, $3.51 – that’s the average price nationwide of a single gallon of regular unleaded gasoline. That means a 15-gallon tank now costs more than $50 to fill. As a little reference point, the week George W. Bush was sworn in as president, the price of a gallon of gas was $1.47.”

Update at end of post: did ABC get these numbers from the DNC?

She didn’t stop there.