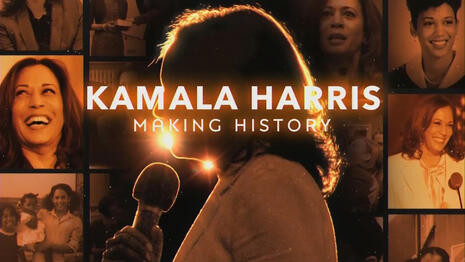 Don’t go searching the broadcast networks or liberal cable outlets looking for controversies: the news media haven’t talked about Harris being the most left-wing Senator of 2019, and the second-most liberal Senator of 2020 (just a tiny fraction behind Vermont socialist Bernie Sanders). There hasn’t much interest, either, in how she’s failed to make any impact during her first weeks as the Biden administration’s lead official on the border crisis.

Instead of evaluating the particulars of her job performance, the media have instead gushed over her “historic,” “seismic,” and “inspiring” role as a “trailblazer” for being the first woman Vice President. And the Washington Post took a deep dive into her hobby as a crocheter (seriously).

Here’s just a flavor of the fawning news coverage Harris has enjoyed since shortly before she assumed the Vice Presidency:

■ “It took Vice President Kamala Harris just a minute to recite her oath of office. But for women and girls, and especially women of color, it was a seismic moment that both changed the face and the fabric of American democracy.”
— Anchor Norah O’Donnell on the CBS Evening News, January 20.

■ “Every day she’s in office will be historic….I think a lot of people just want to push the pause button just for a second and recognize the fact that she is certainly a trailblazer.”
— NBC’s Sheinelle Jones on Today, January 20.

■ “Wednesday is also the day we start addressing Kamala Harris as ‘Madam Vice President,’ a change that’s the culmination of all she has worked for....It might seem that Kamala Harris was born for this moment in history.”
— CBS Sunday Morning host Jane Pauley profiling Harris, January 17.

■ “There are so many people who are so proud of Kamala Harris. I love the interview she did yesterday with Jane Pauley on Sunday Morning. At one point she was running for student government and they were saying, ‘Not your time, not your time,’ and she says whenever people tell her no she ‘eats no for breakfast.’ I like that way of thinking, ‘She eats no for breakfast.’”
— CBS This Morning co-host Gayle King, January 18.

■ Reporter Abby Phillip: “Saturday, November 7th, 2020. At a drive-in celebration rally under the Delaware night sky, a historic victory for one woman and a win for women, girls and people of color, nationwide....Life’s possibilities were something Kamala Harris was born to believe in.
Kamala Harris: “The soundtrack of my childhood was Aretha Franklin, singing, ‘You are young, gifted and black.’”...
Phillip: “And here she is a woman of color, a wife, a Momala, a prosecutor, a senator and now the Vice President-elect of the United States of America.”
— CNN Special Report: Kamala Harris, Making History, January 17.

■ Reporter Rachel Scott: “It was at Howard where she ran her first campaign as a freshman in college and joined Alpha Kappa Alpha sorority incorporated….Now she’s inspiring that next generation.”
Student Abigail Hall: “We feel inspired, we feel energized.”
Student Madison Thibeaux: “Just seeing her and being able to feel like I’m being represented in the same way that she’s there and I’m there. I just feel like she’s me, I’m her.”
— ABC’s Good Morning America, January 20.

■ “Back in 2017, one of Joe Biden’s final acts as Vice President: giving the oath to a brand new Senator, Kamala Harris. Four years later, they share a much larger stage, the unlikely union of two generations....Born in 1964, Kamala Harris’s parents, two young intellectuals, immigrants out to change the world. She says she remembers going to peace rallies and civil rights marches in her stroller....Biden, the youngest elected to the Senate; Harris, the first woman of color in every office she’s ever held. Now, he becomes the oldest to serve as she breaks the glass ceiling that’s a heartbeat away....Two different American experiences now blended together. The history they’ve lived, part of the history they’ll make in these uncertain times.”
— NBC’s Cynthia McFadden on the January 22 Nightly News.

■ “The historic significance of her latest role is hardly lost on the little girl who grew up biracial in a world with so few models in public life....‘Knowing that there was a candidate that I resembled so much was so cool in and of itself. I also just felt really lucky that we figured out a way to have fun with her early on and make her a joyful character. There’ve been times where you’re asked to play up someone’s flaws or characteristics that are annoying or frustrating or embarrassing. This one feels like a superhero cape I get to don.’”
— Saturday Night Live’s Maya Rudolph, talking about her role playing Harris on the show, as quoted in a February 22 cover story in Entertainment Weekly.

■ “When Vice President Harris visited a woman-owned yarn shop in Alexandria last month, she mentioned a little-known fact about herself that left the fiber arts community a bit giddy. The new vice president is a crocheter....”
“‘Knowing that the vice president is a crocheter gives me street cred,’ says [Allison] Hoffman, who sells patterns for Amanda Gorman and Bernie Sanders dolls, among others. ‘Now I can say that I am doing what Kamala Harris does.’”
— The Washington Post’s Jura Koncius in an April 12 article, “Vice President Harris is making her mark on the Washington-area crochet scene.” 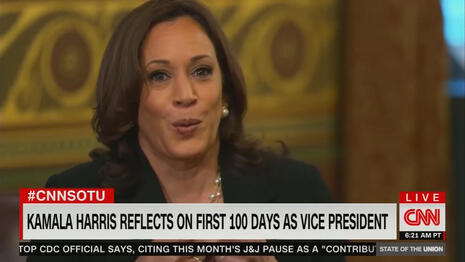 ■ Co-host Dana Bash: “Racial tensions, as you just mentioned, they are really palpable. Your experience, your life experience, is different from every one of your predecessors. How is that bringing itself to bear right here in the White House?...We’re almost at 100 days. Tell me something that has surprised you, that you never thought that you would see, hear or feel personally, as the Vice President of the United States.”
Vice President Kamala Harris: “We are going to lift half of America’s children out of poverty, Dana. How about that? How about that?...That’s good stuff. That’s really good stuff.”
— CNN’s State of the Union, April 25.