What does it say about the Huffington Post when one of their religion bloggers traffics in unproven charges about supposed racial slurs hurled at Congressman John Lewis at the March 20 Tea Party in Washington D.C.? Here is Eddie Glaude, Jr., Professor of Religion at Princeton University, performing his Pinocchio impression:

The word n----er found its way back into our national conversation recently. Some tea party activists hurled the epithet at Congressman John Lewis. Along the way they called Representative Barney Frank a faggot and spat on Congressman Emanuel Cleaver. This venom was supposedly provoked by health care reform; it only revealed how debased our public conversation has become.

There is $10,000 just waiting to be picked up by Al Sharpton. That is the prize money that Andrew Breitbart has offered to anyone who can reveal a video of Tea Party protestors in Washington, D.C. on March 20 who supposedly screamed the N-word at Congressman John Lewis. This "incident" first came to light when David Kerly breathlessly reported on it for ABC's World News Tonight:

Yes, Kerly reported the racial invective as an absolute fact. Only one small problem. Despite the fact that many cameras were recording this scene, not one video has yet been produced proving this despite the fact that Andrew Breitbart has now offered a $10,000  cash incentive to do so:

It’s time for the allegedly pristine character of Rep. John Lewis to put up or shut up. Therefore, I am offering $10,000 of my own money to provide hard evidence that the N- word was hurled at him not 15 times, as his colleague reported, but just once. Surely one of those two cameras wielded by members of his entourage will prove his point.

The Association of Community Organizations for Reform Now (ACORN) has announced that it is disbanding.

Though the hard-leftists that formed or were running it are likely to show up in some other venue and perhaps in a successor organization down the road (Update: or perhaps burrow themselves into the government, as NB commenter "Hunter 12" suggests), this is a moment to savor. Two twenty-somethings, acting entirely on their own, assisted later by a skilled mentor who knew the value of their work and how to maximize the mileage to be gained from it, brought down what had turned into a pretentious, intimidating, fraud-riddled wing of the Democratic Party's get out the vote effort. All that remains -- frankly more than should be allowed to remain -- is ACORN Housing Corporation. According to USA Today, the Wall Street Journal, whose related article is behind its subscription wall, is saying that ACORN Housing "has a separate budget and board."

In one last act of sympathy, most of the press is giving ACORN's leaders a chance to vent without rebuttal and in some cases supplying their own sour grapes. Here are some examples: 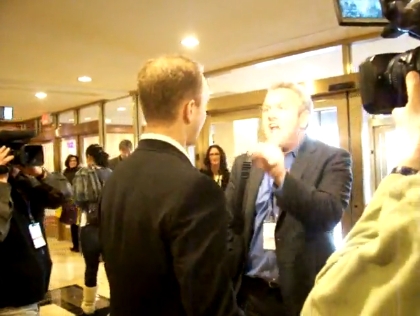 The subheadline was even worse: "A photo of the righty stuntman at a white-nationalist confab illustrates a career marked by racial resentment."

With pressure from Breitbart's website Big Journalism, Salon was forced to issue a correction.

Breitbart to Media: The Gig Is Up - You're Not on the American Team 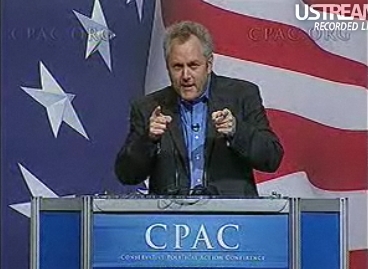 Conservative publisher Andrew Breitbart called out the mainstream media Saturday saying, "The gig is up. We figured you out. You're not on our team. You're not on the American team."

Speaking to a lively crowd at CPAC, Breitbart attacked the entire liberal establishment: "This multicultural crap that you instill in our kids the second they get into college, and you separate them and pit them against each other so that you can get votes every election cycle, that's ending right now."

He marvelously continued, "Your Alinsky tactics to try and destroy Hannah [Giles], James [O'Keefe], and me: Bring it on!"

Breitbart also had some choice words for his "friends" at the most liberal television news outlet on the planet asking, "Hey, how is that Watergate Junior story, MSNBC?" (video embedded below the fold with transcribed highlights, h/t Story Balloon):

Breitbart to NY Times Reporter for Alleging Racial Tones at CPAC: 'You’re a Despicable Human Being'

After Barack Obama's election as the first black president of the United States, we were supposed to have entered a new, post-racial era. However, as many feel it has turned out, any dissent or criticism of the most powerful man in the free world or his agenda draws allegations of "racial tones," as happened on the New York Times Web site on Feb. 18.

And on Feb. 18 at the 2010 Conservative Political Action Conference, Andrew Breitbart, publisher of Breitbart.com, Breitbart.tv, Big Hollywood, Big Government and Big Journalism, called out the Times' reporter, Kate Zernike, for making those allegations. (6:00 in first video)

Breitbart was accepting the Reed Irvine Accuracy in Media Award for extensively covering one of the most "uncovered" stories of 2009 for corruption within the so-called community activist organization ACORN. 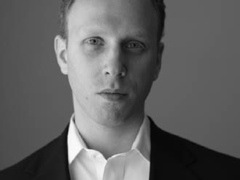 Salon columnist Max Blumenthal continues to get flak for his slanderous, factually-challenged hit piece on conservative filmmaker James O'Keefe last week. The column, premised on a host of omissions and baseless assumptions, contended that O'Keefe's is a racist.

Blumenthal's latest critic is Columbia Journalism Review, Old Media's paragon of journalistic elitism. CJR has requested that he correct but one of the many errors that comprise his column.

But CJR really has a problem, it seems, that Blumenthal has given ammunition to critics who claim Old Media is rife with liberal bias. CJR contributor Greg Marx lamented that Blumenthal and other quasi-journalists, in ignoring facts to support their agendas,give "ready-made ammunition for that broader campaign."

Breitbart to Media at Tea Party Convention: 'It's Not Your Business Model That Sucks, It's You That Sucks!'

Conservative publisher Andrew Breitbart had some harsh words for media members Saturday saying, "It's not your business model that sucks, it's you that sucks."

Addressing the National Tea Party convention in Nashville, Tennessee, Breitbart accused the press of "contempt for the American people."

"In order to create the perception that the minority is the majority and the majority is not just the minority, but a bad, racist, homophobic, all those buzzwords that they learned in the freshman orientation class at Wesleyan, are used as weapons to try to destroy you and intimidate you to not speak up and to speak your mind," said Breitbart to an enthusiastic crowd.

"And your days of doing this are over" (video embedded below the fold with partial transcript, h/t Gateway Pundit):

By Lachlan Markay | January 28, 2010 4:21 PM EST
A spokesperson for MSNBC told Politico today that the channel's brass has reprimanded David Shuster for derisive tweets he directed at James O'Keefe Tuesday. Within hours, he had retracted portions of his tweeted comments on air during an interview with Andrew Breitbart.

This humble blogger documented the Twitter exchange yesterday, and pointed out that Shuster was much quicker to assume O'Keefe's guilt than he was the guilt of Major Nidal Hasan, the shooter at Fort Hood.

“The comments were inappropriate. We have talked to David about them," said the MSNBC spokesperson, referring to a series of tweets that included this one: "a) you are not a journalist b) the truth is you intended to tap her phones c) it's a felony d) you will go to prison."

Shuster retracted his accusation that O'Keefe had attempted to tap the phones in Sen. Mary Landrieu's office on his show this afternoon after Breitbart blasted Shuster for his false accusations.

In it, he clearly delineates the difference between "the news" as establishment media outlets want it dispensed and the "market for information" that technology has created. Its only shortcoming is that he gives Arianna Huffington a pass for "coming to the table as an honest broker." I'll point out glaring examples that will disprove that notion later.

First, though, behold the beauty of Breitbart's treatment of the issue of "objectivity" and his clear statement relating to the two types of information choices we have:

The launch of the Daily Caller is a necessary step toward creating ideological parity in the all-too-clearly biased mainstream media. It is a good thing that you, Tucker, are admitting that you come to the table with certain ideological baggage, and my new site Big Journalism will be there to watch your back when the well-funded, organized left’s knives come out to try to discredit and attempt to destroy you. Believe me, they will.

UPDATE BELOW THE FOLD - THE ESTEEMED MR. CALDERONE RESPONDS.

CORRECTION: I said the Washington Post was on the hook twice on Calderone's list.  H/t to NBer Dean who pointed out it's three - #s 2, 7 & 10.  A thousand apologies, and thanks to The Man from the People's Republic of Maryland.

Politico's staff reporter Michael Calderone has compiled his list of his top ten Media Blunders of 2009.

I for one think he did a fully fair and more than fairly good job of it. Media Research Center Director of Media Analysis Tim Graham for two thinks so as well.

On his list were the likes of MSNBC's Keith Olbermann and Rachel Maddow, the New York Times's Maureen Dowd and CNN. And the Washington Post - twice. Targets all for which you'll find a rich environment here on NewsBusters. And he slammed the traditional media in totality for remaining dockside while the Good Ships ACORN and Van Jones set sail on alternative media seas. He hailed the Fox News Channel's Glenn Beck and website mogul Andrew Breitbart by name for captaining those stories when the Jurassic Press stood down.

Calderone clips Fox News for what he calls their "Tea Party Trifecta," but he's hardly bashing meritlessly here either. An FNC producer was caught on tape rallying a Tea Party crowd. That is quite a bit over the top. And Sean Hannity did run B-roll from the wrong rally - a more populous one - and was forced to apologize to the world generally and Jon Stewart particularly.

Though Hannity's probably was an honest mistake. The Pulitzer-winning Dowd's excuse for "borrowing" a paragraph from the liberal website Talking Points Memo - that a "friend" had sent it to her - bends the credibility curve downward quite a bit.

Someone at Politico worn-out horsed (See: Definition #3) Calderone on the photograph composite accompanying his article, however. (Said snapshots appear below the fold.) We don't think Calderone chooses what goes with his pieces. Perhaps he should.