CBS, USA Today, and the Associated Press all sang from the same sheet of music on Saturday, as they covered the end of the Catholic bishops' Extraordinary Synod on the Family. On CBS Evening News, Jim Axelrod played up a supposed "deep split over the direction Pope Francis wants to take the Church," after the Church's leaders rejected controversial language about homosexuals and divorced Catholics in an earlier draft report. Axelrod also underlined that the bishops "considered language in [the] document...that would welcome gays."

ABC, CBS, and NBC spotlighted the issue of child sex abuse by priests on their Saturday morning and evening newscasts – twenty-four hours or less before the Catholic Church canonized Popes John XXIII and John Paul II. CBS and NBC both uncritically turned to the president of Survivors Network of those Abused by Priests (SNAP), but didn't mention her controversial affiliations with prominent anti-Catholics.

CBS and ABC also hyped how "some of the faithful have complained the canonization process was fast-tracked." ABC's Terry Moran even inserted some slanted labeling of the Catholic practice of venerating the relics of saints on Saturday's World News, and wondered if modern people could relate to the Church's examples of holiness: [MP3 audio from the networks' reporting available here; video below the jump]

The first Christmas mass of Pope Francis drew positive attention from all three networks on Christmas Eve morning, but CBS took the cake in celebrating what it perceives as the liberal tilt of the new pontiff.

Allen Pizzey openly declared Time magazine gives out honors for liberalism: the pope’s exhortation against the “absolute autonomy of the marketplace” and “comments like who am I to judge in relationship to homosexuality contributed to making the Pope Time magazine's Man of the Year.” (Technically, it’s “Person of the Year” now.) Somehow, previous popes never cared about the poor like the new pope:

The mainstream media are in love with Pope Francis, but it's not because of his conservative theology. It's because they see him as a potentially liberal pioneer for the Catholic Church. On Saturday’s CBS This Morning, the network ran a story that cheered on the pope in his supposed struggle against more traditional voices within the church.


Vatican correspondent Allen Pizzey drew the battle lines at the top of his report and let his viewers know who is winning the fight: “Well, the Easter celebrations are highlighting a struggle between the new, simple ways of Pope Francis and the conservative old guard of the Catholic Church. So far, Francis is keeping one step ahead of his critics.”

Allen Pizzey readily identified Pope Francis as a "conservative" on Tuesday's CBS This Morning, but failed to give an equivalent ideological label to Vice President Joe Biden and Rep. Nancy Pelosi, who attended his installation Mass in St. Peter's Sqaure. Pizzey spotlighted the apparent "stark contrast" between the new pontiff and the two liberal politicians, whom he described as being "pro-choice and support[ing] same-sex marriage."

The correspondent also omitted that the American delegation to the Mass at the Vatican included a pro-life officeholder – New Mexico Governor Susana Martinez.

CBS wasted little time to play up newly-elected Pope Francis' "conservative" views on issues like abortion, same-sex "marriage", and birth control. On Thursday's CBS This Morning, Norah O'Donnell underlined how the former Cardinal Jorge Bergoglio was "described as a staunch conservative". Mark Phillips also used the "conservative" label, and pointed out how the Pope's doctrinal stand has "not made him popular with relatively progressive Jesuit brothers."

Charlie Rose also pressed New York City Archbishop Timothy Cardinal Dolan during the morning newscast about "doctrinal changes on ordination of women, on celibacy, on divorce." When Dolan emphasized that "doctrine can't change," Rose interjected, "But how do you respond to the fact that this really is the century of women?"

Remember that scrap of papyrus the media were screaming about that claimed that Jesus had a wife? Scholars are lining up to dismiss it as a forgery. The Smithsonian Institute canceled its planned documentary on the subject after scholars expressed doubts about its authenticity.

But the media, so quick to report on a scrap that CBS reporter Allen Pizzey argued “challenges the very foundation of Christian thinking,” weren’t so eager to report on the mounting evidence that the scrap of papyrus was a forgery.

CBS's Allen Pizzey completely whitewashed the struggling European economy on CBS Sunday Morning to bash the Republican presidential candidates' attack on President Obama's economic policies. Pizzey zeroed-in on Germany's lower unemployment rate and cited left-leaning Professor James Walston, who claimed that "the candidates are dealing in caricatures of Europe that are about 90% wrong."

The journalist played clips from Newt Gingrich and Mitt Romney, who defended the U.S. Constitution and ripped "European socialism." He condescended in reply, "If you're a candidate who wants to move to the White House, why worry about details?" Pizzey also turned to a European woman who insulted the Republican candidates' intelligence: "I just hope that most Americans are just more intelligent than those politicians" [audio clips available here; video below the jump]. 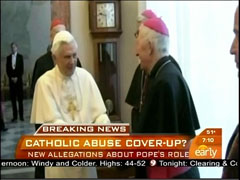 On Friday's CBS Early Show, news reader Betty Nguyen continued the media barrage against the Catholic Church and Pope Benedict as she proclaimed: "They are circling the wagons at the Vatican, defending the Pope amid new charges that he helped cover up cases of sexual abuse when he was a cardinal."

In the report that followed, correspondent Allen Pizzey treated the Holy Father like a corrupt politician: "The abuse scandal, highlighted with pictures of the Pope, glared from the front pages of every major newspaper in Italy today. And in a clear sign of just how much trouble Benedict is in, only two of them defended him." Later in the report, a headline appeared on screen that read: "Catholic Abuse Cover-up? New Allegations About Pope's Role."

Pizzey noted how the Pope recently "told a Vatican youth rally...that the word of God would show them how to prevent falling into what he called 'the abyss of drugs, of alcohol, of addiction to sex and to money.'" He then added: "But victims of abuse...say the Pope failed to heed his own advice." 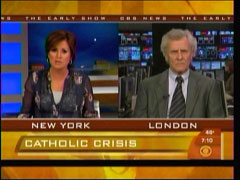 On Friday's CBS Early Show correspondent Allen Pizzey made the over-the-top declaration that allegations of child sexual abuse within the Catholic Church amounted to "a scandal that's threatening to become a plague of biblical proportions." A headline on-screen declared a "Catholic Crisis."

Pizzey was reporting on Pope Benedict XVI's efforts to address the scandal in a soon-to-be published Papal letter, but noted that such a statement "seems unlikely to assuage the anger of victims in parishes ranging from the U.S. to Ireland, the Netherlands, Switzerland, Austria, Germany, and Brazil." Pizzey cited one victim of abuse, Andrew Madden, who argued: "I don't think a pastoral letter is the proper context in which to respond to a report about the cover-up of the rape of children."

Madden has made his opinions of the Catholic Church well-known on Twitter. One of his tweets reads: "Actual photo of the Devil at work in the Vatican," with a link to a picture of Pope. In response to another tweeter complimenting him on a recent television appearance, Madden replied: "do my best, but these really are the scum of the earth, I'd never have said that 6 months ago but I truly believe it today." 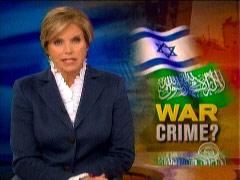 It was a year ago this weekend that the Israeli military halted its three-week campaign, Operation Cast Lead, against Hamas militants in Gaza, during which Israel had responded to thousands of rockets and mortars launched from Gaza over several years. During Israel’s military campaign, on a number of major stories, many American television newscasts were more inclined to report accusations made by U.N. or Palestinian officials that the Israeli military had acted improperly than they were to update viewers after the military held investigations and released reports disputing the accusations made against it. At one point, CBS Evening News anchor Katie Couric went so far as to claim that the Israelis "may have used a banned weapon."

Below is a compilation of NewsBusters postings which document how the morning and evening newscasts on ABC, CBS, NBC, CNN, FNC, and PBS reported a number of major stories from the Gaza War, highlighting examples of the media either engaging in distortion or omitting relevant information that would have cast Israel in a more favorable light, including several times when the broadcast and news networks even ignored reports issued by the Israeli military after it had taken time to investigate and dispute accusations made against its troops which had previously been reported by the media.

After months of investigation, the Israeli Defense Forces (IDF) released a report addressing accusations from some humanitarian groups that its use of white phosphorus (WP) munitions in the Gaza War was a violation of international law, as the report distinguishes between the use of WP as a weapon and the more common non-weapon purposes such as providing smoke screens to conceal troop movements. The pro-Israel group CAMERA recently quoted from the report in the article, "Did Israel’s Use of White Phosphorus Constitute a War Crime?" by Steven Stotsky, on its Web site. The report not only argued that the military's decision to explode the munition in the air was safer for civilians than it would have been to explode it on the ground, but it also suggested that the use of WP to facilitate troops movements also meant civilian casualties were lower than they otherwise would have been by making attacks on Hamas more accurate.

Last January, evening newscasts and some morning newscasts on the broadcast networks and on CNN and FNC reported on accusations from humanitarian groups – with varying degrees of accuracy – with CBS even referring to WP as a "banned weapon," and a "horrific new weapon, " and contending that the IDF may have committed "war crimes." At one point, CNN similarly incorrectly identified WP as a "banned substance." ABC showed a clip of a wounded Palestinian boy charging that Israelis have "no mercy" even for children. (MSNBC does not have a morning or evening newscast equivalent to NBC’s Today show or the NBC Nightly News, so MSNBC coverage was not examined.) But, according to a Nexis search, none of these news programs showed any interest in updating viewers once the Israeli military had made public its say on the matter.

As previously documented by NewsBusters, the January 22 CBS Evening News ran a report (video here), introduced by anchor Katie Couric, which left the impression that the Israeli military had used a "banned weapon," without informing viewers that there are non-weapon uses for WP, and passed on accusations of "war crimes." Couric: "Hamas just ended a bloody war with Israel in Gaza, and tonight there is growing evidence the Israelis may have used a banned weapon. Some even accuse them of war crimes."

On the January 25 World News Sunday on ABC, as he introduced a report by correspondent Simon McGregor-Wood, anchor Dan Harris played up complaints against "both sides" in the war, and even suggested that the Israeli side may have been worse in its conduct of the war as he highlighted that there was "especially tough criticism" leveled at Israel. Harris: "Both sides are being dogged now by complaints that they violated the rules of war. Israel has come under especially tough criticism for its use of a chemical agent."