Alina Cho Departs CNN: A Recap of Her Worst Bias at the Network

Longtime CNN reporter Alina Cho is no longer with the network. During her time at CNN that began in 2004, she could be embarrassingly soft to liberals and Democrats like Bill Clinton and the Obama family.

Below is some of Cho's worst bias at CNN that NewsBusters reported on:

CNN's Alina Cho "loves" that Democratic Newark Mayor Cory Booker is living on food stamps for a week and gushed about it with Soledad O'Brien on Monday's Starting Point.

"I love this story. And I know you do, too, Soledad," fawned Cho. "I do, too, because mostly I thought – I've never really thought about how much money people who are on food stamps actually get," O'Brien chipped in.

CNN had reported Page's band named "End Apathy" as "white supremacist," "neo-Nazi," and as a "hate group." Yet it also repeatedly labeled it "far right" on Sunday and Monday.

Nanny state Mayor Michael Bloomberg is at it again, trying to pass a ban on large sugary drinks, all with the media’s help of course. CNN’s Alina Cho favored the proposal in her May 31 report during the 10 a.m. hour of “Newsroom.”

“Newsroom” anchor Carol Costello called the Bloomberg proposal to ban sugary drinks larger than 16 ounces at roughly 20,000 establishments “controversial,” but Cho found nothing to criticize. Instead she blatantly promoted the idea with her one-sided story. (Video after the jump)

Reporting on the death of North Korean dictator Kim Jong-il on Monday, CNN's American Morning re-visited a soft report from then-correspondent Alina Cho's heavily-guarded visit to the country in 2010.

Cho admitted that the state controlled where she went – but her reporting was fawning at times in what clearly was the state's effort to produce propaganda for outside nations.

While discussing the Super Committee's failure on American Morning, Cho oddly said to her guest, "Just yesterday on Meet the Press you said there were things you agreed to that you didn't want to talk about public, which sounded very sexy I might add" (video follows with transcript and commentary):

Multiple times on Tuesday, CNN touted a musician who quietly played a song about Occupy Wall Street at an APEC dinner attended by President Obama and other world leaders.

Hawaiian musician Makana performed in the background during Saturday's APEC dinner and wore a t-shirt that read "Occupy With Aloha." He sang softly and repeated the song over and over that was a tribute to Occupy Wall Street protesters. "We'll occupy the streets, we'll occupy the courts," Makana sang in a brief clip provided by CNN.

Liberal Columbia University professor Dorian Warren compared the Occupy Wall Street protests to the NBA lockout on CNN Monday, saying that the players are using their "voice" and "bargaining power" to air their grievances with the owners like the protesters are doing with the banks.

"Record profits last year in the NBA, yet the owners are saying they don't have enough money to share with the players," Warren said of the lockout. "And so, the players are, unlike most American workers, staying strong in their union to say, no, we actually have a voice here and we have bargaining power and we're not going to let you get away with that." 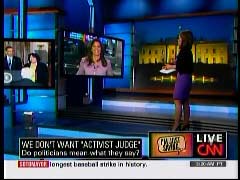 During a segment on Friday’s “American Morning,” CNN correspondent Carol Costello used two liberal talking heads to cast doubt on the “judicial activist” label used by conservatives. Costello used three sound bites from Jonathan Turley of George Washington University Law School, who branded the use of the term as “perfectly juvenile,” and one from NPR’s Nina Totenberg to cast aspersions on conservatives who are concerned about judges legislating from the bench.

Costello’s report, which began 20 minutes into the 6 am Eastern hour of the CNN program, began by labeling the “judicial activist” term itself an “act” by politicians: “We hear politicians say it all the time, ‘we don't need an activist judge legislating from the bench.’ But what exactly does that mean? Critics roll their eyes when they hear, ‘we don't want an activist judge on the bench,’ when, in reality, that’s exactly what they want. I’m just saying, if that’s true, why not drop the act and tell voters what you really mean?” She further explained that it was a “buzzword that’s got staying power.” 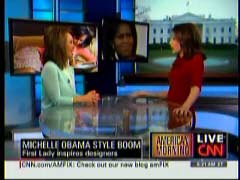 CNN correspondent Alina Cho went out of her way to highlight First Lady Michelle Obama’s “meteoric rise to style icon status” and how it has inspired the fashion industry during a report on Thursday’s American Morning. After detailing how a dress Mrs. Obama wore on the cover of Essence magazine ended up selling well, she commented that “the bottom line is designers are looking at Michelle as a muse now.” Cho also detailed how the apparent Obama-inspired fashion craze has expanded to cosmetics and fitness classes.

Co-anchor Kiran Chetry introduced Cho’s report, which began 17 minutes into the 6 am hour of the CNN program, by trumpeting how “nearly a 100 days into her role as first lady, it’s become clear that she’s really a one-woman stimulus package for the fashion industry.” The CNN correspondent continued with similar lofty language: “Michelle Obama’s meteoric rise to style icon status has surprised even those in the fashion industry. For months, we’ve been watching everything she wears, and in many cases, we’re going out and buying it. So designers are sitting up and taking note. They’re thinking it’s time to cash in.”

CNN's Alina Cho: Obamas are the 'Royal Family of the United States' 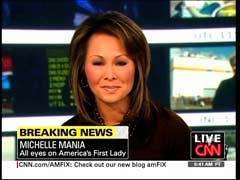 CNN correspondent Alina Cho loaded the regal language into her report on Wednesday’s American Morning about Europe’s “apparent love affair” with Michelle Obama. Besides the obligatory Jackie Kennedy references, Cho gave a preview of the first lady’s tea with Queen Elizabeth II: “On today’s schedule: tea with the queen, and insiders say the queen and America’s queen bee will be fast friends.” The correspondent even compared Mrs. Obama to Princess Diana. She also referred to the Obamas as the “royal family of the United States.”

Cho began her report by hyping the first lady’s popularity, how it apparently isn’t exclusive to the States, and how it could overshadow her husband the president: “Tina Brown, as you know, joked about an hour ago that Sara Brown is a beautiful girl but, you know, everybody sort of knows that right now, at least, she pales in comparison to Michelle Obama. Of course, the big question is, could she overshadow the president?...So, you know, there’s no denying that Michelle Obama is a rock star in America, but how is her style and personality playing abroad? Well, the early reviews are very good. The apparent love affair with the U.S. first lady is flourishing in Europe.”

For the latest ad campaign, Calvin Klein hired Steven Meisel, famous for the photography in Madonna’s pornographic “Sex” book in the early 90s. The ads, which can be seen in women’s fashion magazines such as Lucky and Cosmopolitan and soon to be on billboards, are composed of photographs of three to five twenty-somethings sprawled out half naked on each other in various sexual positions. Viewers can see the multimedia version of the ads in an online video considered too explicit to air in the United States.

Calvin Klein has propagated controversial ads in recent history, the most unforgettable being a 1999 advertisement that conjured up images of child pornography. Due to public outcry, the offending ads, which displayed young models showing their underwear and included creepily suggestive dialogue, were removed from the campaign within 24 hours.