By NB Staff | October 1, 2009 3:30 PM EDT
BMI's Julia A. Seymour appeared on today's Fox Business Live with Stuart Varney to discuss the discrepancy in media coverage of unemployment under Presidents Reagan and Obama.

We looked specifically at seven months of coverage in 1982 and again in 2009 that had very similar periods of unemployment where it was going up between 8 - between 8 and the high 9 percent range. And what we found was that the network reporting on ABC, NBC and CBS was overwhelmingly negative to Reagan but positive toward Obama. They were actually 13 times more negative to President Reagan than they were to Obama.

The progressive mindset is a curious one, as evidenced by New York Times columnist and Nobel Economics Prize recipient Paul Krugman.

Krugman appeared on MSNBC's Sept. 23 "The Rachel Maddow Show" and lamented that the Obama Administration missed the opportunity the recent financial crisis offered to fundamentally change how the American economy operates. Host Rachel Maddow asked Krugman what the Great Depression taught economists when it comes to avoiding a repeat.

"It taught us a lot about how to avoid one, which is that you really have to, have to put some constraints. I mean, it sort of roughly, banking is very useful but extremely dangerous and banks have to have all kinds of - you know, fencing put around them as a protection. They have to have some guarantees so that we don't have bank runs, so people know their money is safe. But then, we also have some regulation so that bankers don't take huge risks with other people's money on a ‘heads I win, tails you lose' basis."

ABC’s Jonathan Karl on Friday attacked wasteful government spending of stimulus money, even going to the John Murtha Airport in Western Pennsylvania, which he derided as a "ghost town." Providing some refreshing journalistic skepticism about the Obama legislation, Karl described the airport as a "monument to powerful Democratic Congressman John Murtha."

The House member’s portrait could be seen in the background as Karl reported for Good Morning America on the $17 million that the tiny airport has received. (Politico puts the total number at $150 million.) The reporter conducted a tour of the empty, quiet building: "When we visited Murtha Airport earlier this year, the place looked like a ghost town. We have rented a car. But the Hertz counter is as deserted as the rest of the airport." (Karl also traveled to other small town airports that recieved money.) 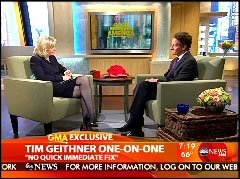 Good Morning America co-host Diane Sawyer on Tuesday conducted a surprisingly tough interview with Tim Geithner, grilling the Treasury Secretary on tax increases, spending and highlighting the 9/12 rally in Washington D.C. Speaking of the American people, she asserted, "They don't see a possible way out without tax raises."

After Geithner tried to squirm out of responding, Sawyer, who will leave GMA in January to become the anchor of ABC’s World News, reiterated, "Are you still guaranteeing that no one in America will have their taxes raised unless they make more than $250,000 a year?" Geithner noted how this was a "commitment" for the President, prompting Sawyer to again attempt to nail down a firm answer: "That's your promise? It will not happen?"

About a year ago, then-Senator and Democratic nominee Barack Obama managed to seize control of the issue of taxes from the Republican Party by promising lower taxes for "95 percent of Americans."

But today it's a drastically different situation. Obama's $787-billion stimulus has been passed into law and the administration is taking on higher deficits, which will only increase if a Democrat health care reform bill passes. It looks as though the president's hand will be forced and he will have to raise taxes. That's begs question - where were the media on this a year ago?

CNBC's Erin Burnett asked Treasury Secretary Timothy Geithner at a CNBC made-for-television town hall on Sept. 10 if taxes would be raised. Geithner dodged the question, but Burnett interpreted the dodge to mean yes, as she explained on NBC's Sept. 13 "Meet the Press."

If you rely only on the three major broadcast networks or one of the top major national papers as your news sources, the name "Van Jones" might prompt you to say,"Who?" But, while the media had difficulty reporting on Van Jones the embattled member of the Obama Administration, it had no such trouble covering Van Jones the anti-Iraq War protestor.

Jones, who was President Barack Obama's so-called "green jobs czar" resigned in the middle of the night on Sept. 6 - a Saturday night/Sunday morning on Labor Day weekend. He had for weeks been embroiled in controversy after revelations that he had signed a petition demanding an investigation into whether the 9/11 terrorist attacks were an inside job by the U.S. government, was a self-described communist and had publicly derided Republicans as "a**holes." But the story had gotten little coverage from the mainstream media.

However, take a look at this video (1:25 in). Jones shows up in a CBS March 23, 2003 "The Early Show" segment touting the efforts to protest the 2003 invasion into Iraq by shutting down the city of San Francisco.

It's clear that President Barack Obama's $787-billion stimulus hasn't worked as advertised, but some economists are worried it could backfire and cause something much worse.

According to a new study by economists Charles Rowley of George Mason University and Nathanael Smith of the Locke Institute and endorsed by Nobel laureate James Buchanan, the Keynesian tactics employed by Obama "will ultimately hamper the long-term growth potential of the U.S. economy and may risk delaying full economic recovery by several years." The study accuses the president of making Depression-era mistakes.

Stephen Moore, member of the Wall Street Journal editorial board and senior economics writer, explained the study on Fox News "On the Record" Sept. 7 and said that the stimulus certainly hasn't lived up to its billing.

This is the program that ABC, CBS, and NBC have all characterized as "a victim of its own success."

But Carty didn't do nearly as much as she could have with the information she learned. Her most grievous oversights were her failures to compare the government's newly promised payment timetable to the 10 days dealers were told to expect, and to explain to her readers the extra unreimbursed costs dealers will have incurred as a result of the program even if (emphasis if) dealers receive full payment for their Clunker transactions.

Officials set Sept. 30 as goal to pay dealers on clunkers

What is it about consequences that the liberal media and government simply cannot grasp?

CNN "Newsroom" admitted Aug. 27 that new car prices are "expected" to go up as a result of the government Cash for Clunkers giveaway.

Collins' use of the word "success" to describe the program was consistent with the media's advocacy of the program. All three broadcast networks called it a "victim of its own success," after the initial $1 billion in funding ran out after just a week - instead of the 14 weeks projected.

Matthews: Obama Not Getting Enough Love for Economic 'Comeback'

Try to keep a straight face when you hear this: President Barack Obama isn't getting enough media love.

That's the world view of MSNBC "Hardball" host Chris Matthews - at least when it comes to the economy. According to Matthews, there has been a plethora of positive economic news - from a stock market that has shrugged off the threat of bad liberal policy, i.e. cap-and-trade or ObamaCare, to the actions of newly reappointed Federal Reserve Chairman Ben Bernanke of pumping liquidity into the economy.

"What do you make of this whole thing about the good economic news out there the president gets no credit for?" Matthews said on his Aug. 25 show. "I'm in the stock market. I have suffered like others before and I have seen this comeback - back up to almost 10,000 now. He gets nothing for this. The fact that consumer confidence, which was once closer to the bone, is way up. The fact that the Fed chair has done such a good job in pumping up the money supply and pumping back the economy, and averting a Great Depression - no credit."

CNN'S Romans: 'Everyone Is Getting This Big Tax Break'

On CNN's American Morning today, business correspondent Christine Romans explained to anchor Kiran Chetry why there are new estimates showing the Federal deficit to be much worse than originally projected by the Obama administration:

ROMANS:  Why? OK, this is really -- it's a complicated problem with a very simple analysis. It's how much money the government is taking in and how much money is going out.

Let's look at how much is going out. Government spending has skyrocketed as you all know over the past couple of years, up 21 percent in the first ten months of this year. Unemployment benefits, health care, bailout programs. We are spending more money than we take in. We are spending gobs of money constantly on lots of different programs to try to get this economy out of the mess it's in. At the same time, revenue is plunging.

ROMANS: That's going down. Non-wage income. All other kinds of income people have down sharply. And then that stimulus tax credit -- that has to come from somewhere. Right? Everyone is getting this big tax break, that means less money going in. 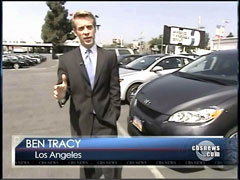 On Thursday’s CBS Evening News, correspondent Ben Tracy reported on the ending of the problem-ridden Cash for Clunkers car buying program, but spun it this way: "Thanks to Cash for Clunkers, what could have been a dismal summer for car sales now has a Hollywood ending....But now, the wildly successful program that provided up to $4500 per clunker is being scrapped."

Tracy visited a Los Angeles Toyota car dealership, hence the Hollywood reference, and spoke with owner Don Mushin who explained: "We normally sell about 300 cars a month. We’re on track this month to do about 600." However, Tracy went on to acknowledge: "Yet, there have been problems. Dealers have to front the money for the rebates, sometimes to the tune of hundreds of thousands of dollars, and the government has been slow to pay them back.."