By Lynn Davidson | June 8, 2007 9:47 PM EDT
More headline editorializing, this time on Yahoo. A June 5 Reuters article titled, “Bush bashes Putin on democracy on eve of G8 summit” sounds like Bush attacked Russian president Vladimir Putin, but the body of the article clearly did not support that view.

The headline told a very different story than the article. Editors not reporters are generally responsible for headlines, and they can greatly influence opinions about the news. The importance of a bias-free headline is that most people don’t read every word of every article; they often just skim the headlines. That meant the people who read just the headline got a very different impression from those who read the entire article (emphasis mine throughout):

"Russia is not our enemy," Bush said after meeting Czech leaders on a visit aimed at highlighting the country's emergence from Soviet domination.

He said he would urge Putin at the summit to cooperate with the U.S. plan to deploy a radar system in the Czech Republic and interceptor missiles in Poland, but later in a speech took a dig at Moscow's record on democracy.

"In Russia reforms that once promised to empower citizens have been derailed, with troubling implications for democratic development," Bush said.

ABC Spins Autocratic Russia: ‘Everybody Is Very Happy with Vladimir Putin There’ 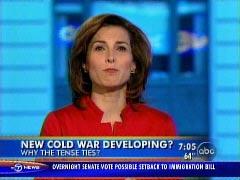 On Thursday’s “Good Morning America,” reporter Claire Shipman portrayed the simmering tensions between Russia and the United States as a replay of the Cold War and also took President Bush, who is meeting with Russian President Vladimir Putin at this week’s G8 summit, to task for missing a “critical diplomatic opportunity” to cooperate with the Russians over the placing of a proposed missile defense system in Poland. 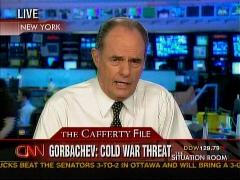 On Wednesday's The Situation Room on CNN, during his regular "Cafferty File" segment, Jack Cafferty quoted Mikhail Gorbachev's recent attack on the Bush Administration in which the former Soviet leader accused the U.S. of "arrogance" and of having "lost credibility" in response to President Bush's plans to deploy a missile defense system in Europe.

Discussing the G-8 summit with CBS's Jim Axelrod, Katie Couric on Wednesday night portrayed an “adamant” President George Bush as the antagonist causing Russian President Vladimir Putin to be “annoyed” about NATO plans to install a missile shield in Poland, a controversy, she fretted, that is distracting attention from global warming. “Economic issues and climate change were supposed to be the main topics,” Couric asserted on the CBS Evening News, “but they're being overshadowed by the dispute between President Bush and Russia's President, Vladimir Putin, over NATO plans to install a defensive missile shield in Eastern Europe,” a shield designed to protect Europe from missiles launched by rogue states.

Referring to Putin's threat to aim missiles at Europe, Couric pressed Axelrod, who was on scene in Rostock, Germany: “Putin is annoyed about this missile defense system. Why is President Bush so adamant about this?” Couric's next question displayed concern about the impact on an agreement on global warming: “I know that global warming was at the top of the agenda. Has that fallen off the radar screen, given all this chatter?”

As people who are following the G-8 summit in Germany are well aware, it is highly doubtful that any meaningful accord will be reached at this meeting concerning CO2 emissions. In fact, reports out of Europe and Asia for many weeks leading up to this event have made this eventuality quite clear.

Yet, this didn’t prevent the Los Angeles Times’ Ron Brownstein for blaming the lack of such an agreement on President George W. Bush.

In an op-ed published Wednesday entitled “Don't Sugarcoat Climate Change; Calling out Bush's intransigence on emissions caps may be the best way for other G-8 countries to get the U.S. to budge on global warming,” Brownstein chose to ignore all of the facts surrounding this issue, and instead pointed an accusatory finger at the media’s favorite target (emphasis added throughout):

There was a summit between Russia’s Vladimir Putin and the leaders of the European Union on Friday that yielded as little results as it did attention from America’s media.

One of the issues on the table was whether Russia is going to provide more energy resources to EU nations starved for such.

Didn’t hear about this?

Well, that’s not surprising, for in the midst of the media’s ongoing attempts to create global warming hysteria while pushing the U.S. to participate in the Kyoto Protocol, our press have little interest in reporting how energy politics across the Atlantic and Pacific oceans are threatening economies around the globe.

Undoubtedly, Boris Yeltsin’s finest moment was the courageous defiance he showed in the face of an old guard communist coup in August 1991. Yeltsin was the focal point of those who rallied to defeat the coup, triggering the chain of events that led to dissolution of the Soviet Union just a few months later.

Yet the establishment media in this country tended to sniff at Yeltsin as an unpolished buffoon. U.S. journalists could not conceal their lack of regard for the man who helped bury Soviet communism, favoring Mikhail Gorbachev, the failed leader who futilely attempted to reform communism.

Here are just a few quotes from the Media Research Center’s Notable Quotable archive, illustrating the media’s preference of the communist Gorbachev over the rebel Yeltsin

Tom Brokaw took the occasion of the ceremonies attending the death of President Ford to take shots at the foreign policy of both Presidents Ford and Reagan. Speaking with Chris Matthews on MSNBC during the 6 PM ET hour, Brokaw observed:

Ratner: America Lacks 'Moral Standing' to Stand Up to Putin

Putin's Russia poses a potentially serious threat to the United States. But America lacks the moral standing to confront it. That was the view expressed by Ellen Ratner on this morning's Fox & Friends. Ratner, the short, liberal side of 'The Long & the Short of It' duo [seen here in file photo], expressed little doubt that Putin's government was behind the murder of Russian dissident Alexander Litvinenko.

Ratner: "I think that there's no question. If I were a betting woman it would be 100% Putin and Russia, it's just their operation and they have the means to do it."

She continued: "We have got to take a very good, careful look at Russia. We're in Iraq where you have sort of a ragtag group of insurgents. And we're not focusing on the Russians that have over 5,000 nukes [and other WMDs] . . . Unfortunately, we're in business with these guys, we need their oil."

"I don't know what we should do except that we are not in a great position because we don't have the moral standing given what we're doing in Iraq."

In a column by Sebastian Mallaby, the Washington Post today has announced the "nadir" of U.S. power. 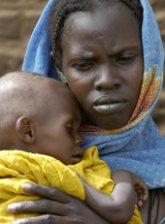 There's a saying along the lines that liberals will always oppose the use of US force - except where US security interests are not at stake.  The New York Times editorial of this morning, The Age of Impunity, provides a perfect case in point.

The central thesis is this: 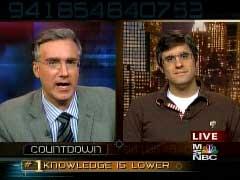 On Wednesday's Countdown show, while reporting on a recent Zogby poll which found that more Americans can name two of Snow White's dwarves than can name two of America's Supreme Court justices, MSNBC's Keith Olbermann took the opportunity to joke that Justices Clarence Thomas and Antonin Scalia are "Dopey and Grumpy." The Countdown host also took a shot at Presi