Back in the days of our MediaWatch newsletter, we used to have a feature called "Revolving Door" to note reporters swapping their jobs for political appointments or political appointees swapping their jobs for reporting gigs. (See the NB Revolving Door topic for more recent updates.) The Minneapolis Star Tribune announced that its editorial writer Dave Hage is leaving "to become communications director for first-term Sen. Amy Klobuchar, D-Minn. Hage, 52, will take over Klobuchar's fledgling press operation," which has already lost its top press aide. Hage, a Minneapolis native, was an economics correspondent for for U.S. News & World Report magazine in Washington from 1991 to 1995, where he drew our attention as he repeatedly attacked Reaganomics and boosted Clintonomics. So the new Democrat job isn’t a shocker.

From our Notable Quotables in March 1993, the myth that health socialism-pushing Clinton would have a "healthy respect" for free enterprise:

It took 15 years to become official, but Carole Simpson has now confirmed what we always suspected: she's a Clinton backer. Readers will recall that during the 1992 campaign, the then ABC News anchor moderated a presidential debate in which she made life uncomfortable for Bush 41, notably with her snide "who would like to begin, the 'education president?'" poke.

According to this Boston Globe article, back in 2003 Simpson was "eased out" of her anchor chair in favor of Elizabeth Vargas. Simpson has now taken a teaching position at Emerson College in Boston, and last night turned up at a Clinton campaign stop in Salem, New Hampshire, where she proceeded to endorse Hillary's presidential bid. Here's how "First Read," a frequently-updated analysis of the day's political news from the NBC News political unit, reported it [emphasis added]:

For the third time in less than a week, ABC anchor and former Clinton aide George Stephanopoulos appeared on "Good Morning America" to dourly assess Republican Fred Thompson’s 2008 chances. On the Thursday edition of GMA, the host of "This Week" attempted to set an impossible bar for the former senator. "...He can't make a mistake," Stephanopoulos breathlessly claimed.

Earlier in the segment, the ABC host negatively spun Thompson’s standings in the polls. Some might compliment the performance of a candidate who, upon entering the 2008 race, is only narrowly trailing the front-runner. Not Stephanopoulos. After claiming that many thought the former actor would surge into first place early in the summer, he critiqued, "That hasn't happened. Most of the latest polls show that he's in second place behind Rudy Giuliani....He hasn't quite rocketed out the way he expected."

In that segment, the GMA substitute host misleadingly characterized the drug arrest of Albert Gore III as getting "in trouble speeding." The Vice President’s daughter also joked that she modeled a character in her new novel about Washington politics after Stephanopoulos. During the August 30 piece, the network anchor introduced author Ian Klaus by glowingly announcing, "...Some people might be watching today and saying, 'You know, I've seen him somewhere before. I've heard his name before.' And that's because you were actually dating Chelsea Clinton when you went to Iraq."

A Perception Issue? Revolving Door Between the ACLU and National Public Radio

In his Monday "Media Notes" column in The Washington Post -- for some reason, the whole column was demoted to page C-7 -- Howard Kurtz reported (in his second item) that National Public Radio's FBI reporter, Dina Temple-Raston, recently did a report quoting the American Civil Liberties Union.

New Editorial Page Editor Cheryl L. Reed has been given marching orders from publisher John Cruickshank and head editor Michael Cooke to re-brand the editorial and opinion section of the Chicago Sun Times with an eye toward the future. Specifically she has been told not to be too conservative. (h/t Republic of Biloxi)

"Don't be conservative," Cruickshank urged me.

Kristin Gore, daughter of former Vice President Al Gore and author of a new political satire set in Washington, appeared on the Tuesday editions of "Good Morning America" and "The Early Show." Both shows only gingerly addressed the subject of Kristin’s brother, Albert Gore III., and his arrest for marijuana and prescription-drug possession after being pulled over last week in California. GMA guest host George Stephanopoulos misleadingly characterized the incident as getting "in trouble speeding." "Early Show" host Harry Smith didn’t mention the drug angle at all.

Stephanopoulos, a former top Clinton aide who worked in the same White House as Al Gore, conducted an extraordinarily cozy interview with the former Vice President’s daughter. Apparently completely oblivious to any conflict of interest, he hyped "Sammy’s House," calling it "very funny." The ABC anchor even joked with Kristin Gore about whether the main character, Sammy Joyce, was based on him:

Kristin Gore: "Have you recognized yourself yet? ‘Cause I should come clean and let you know you’re Sammy."

The Politico reports that former ABC News reporter Geoff Morrell is going to be named the new spokesman for the Pentagon. The Politico’s Mike Allen reports that the idea of picking a working journalist like Morrell was that of Defense Secretary Robert Gates, “in an effort to improve press relations at a time when the administration is under pressure to show progress in Iraq.”

Back in 1993, the Clinton administration also selected an ABC journalist, Kathleen deLaski, as its on-air Pentagon spokesman. At the time, an MRC review found deLaski’s reporting for ABC was “in step with Clintonite thinking that ‘tax and spend’ equals caring.” For more, see “deLaski’s Defensive Detail” in the August 1993 MediaWatch.

It's taken a while but I think it's safe to say that blogging has now become pretty universal within the MSM. Despite the howls of crusty old liberals like Bill Moyers, the web has fractured the political audience and the elite media are out for a piece of it. Big Media outlets like ABC, NBC, Time, CBS, and the New York Times are all blogging up a storm. Unfortunately for their claims of political objectivity, all the blogging has revealed what the center-right has said all along: the elite media in this country are skewed left in both demographics and content.

Stephanopoulos's Double Standard: 'Something Smells Fishy' in Bush Firings, But... 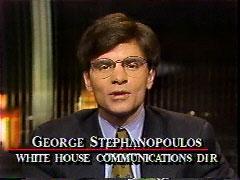 ABC’s George Stephanopoulos grilled Attorney General Alberto Gonzales about the firing of eight U.S. Attorneys on Wednesday, telling him that “something does seem fishy here,” suggesting that the Bush White House was punishing U.S. Attorneys who were not pursuing a GOP-friendly agenda.

As documented in a Thursday MRC CyberAlert posting reprinted here, Kaplan has had a long record of friendly relations with former President Bill Clinton, advising Clinton on how to respond to the Gennifer Flowers scandal in 1992 and blocking anti-Clinton stories from appearing on Nightline. Kaplan has also been hostile to conservatives and once even declared that disgraced CBS anchor Dan Rather's "legacy" was "the gold standard journalists today have struggled to live up to."

Former Newsday Publisher Robert Johnson got his sentence; 15 months in a Federal prison and a $50k fine for his collection of child pornography.