A very emotional Carville surprised host George Stephanopoulos, a friend and former colleague in the Clinton White House, by shouting, "And it just looks like he's not involved in this! Man, you have got to get down here and take control of this!" [Audio available here.]

Carville, a resident of Louisiana, attacked, "Put somebody in charge of this and get this thing moving! We're about to die down here!"

"When the oil slick first spread, we learned the Interior Department's chief of staff was rafting down the Grand Canyon, and now that it's reached our shores, the president is in California raising money for Barbara Boxer, while the head of the EPA makes plans to raise more campaign cash in New York City," said Brian Walsh, a spokesman for the National Republican Senatorial Committee

Gibbs Scolds WH Reporters for Asking So Many BP Questions

Doesn't everyone remember in 2005 when George W. Bush's Press Secretary Scott McClellan (bless his back-stabbing heart) called reporters into the West Wing of the White House and scolded them for asking too many questions about Hurricane Katrina? That followed a similar admonishment earlier in the year about the press's obsession with anything and everything to do with the Iraq War.

You don't remember those things? That's because they didn't happen. Oh sure, someone will be able to find examples of McClellan, as well as successors Tony Snow (RIP) and Dana Perino occasionally expressing irritation with reporters for their silly and/or repeat questions on these and other subjects. But summoning them to the West Wing for a beatdown? Hardly.

That's what Obama administration Press Secretary Robert Gibbs is said to have done last Friday with White House reporters. Here's the full text of audio that can be heard at Breitbart; a somewhat expanded text report, along with a the continually updated original graphic screen-grabbed and incorporated into the image at the top right, are at Capitol News Connection: 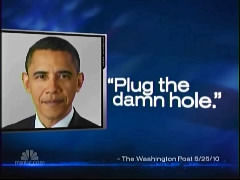 CBS and NBC on Tuesday night reached deep into a Washington Post story – specifically, the 20th paragraph of a 24-paragraph article – to pluck out a quote in order to demonstrate a “frustrated” President Barack Obama has been angry about the gulf oil spill. “A frustrated President Obama says ‘plug the damn hole,’” Katie Couric teased at the top of the CBS Evening News. She soon elaborated:

Frustration over the spill has been simmering for weeks, even in the Oval Office. We learned today that in the first days of this crisis an angry President Obama snapped at a meeting, quote: ‘Plug the damn hole.’ The President will head to the gulf coast on Friday, his second visit in about four weeks.

The NBC Nighty News plastered the quote on screen, as Brian Williams announced:

We also learn more today about the President's frustration. A Washington Post article saying President Obama bluntly told an aide in the Oval Office: ‘Plug the damn hole.’ That hasn't happened yet, but the President is heading back there Friday.

Behar: BP Oil Spill 'Can Be Laid at Cheney’s Feet'; 'People Should Be Furious!'

He may be out of office, but Cheney Derangement Syndrome lives on.

This time, and just like other times in the past, "The View" co-host and host of her own HLN show, Joy Behar used the BP oil spill to attack the Bush administration, specifically former Vice President Dick Cheney by suggesting he was really behind the oil spill.  Her source - it was an outspoken critic of the Bush administration and aid to former Secretary of State Colin Powell, Lawrence Wilkerson.

"There is a lot of blame to go around, obviously," Behar said on the May 25 broadcast of "The View." "But I was listening to this guy, Lawrence Wilkerson. Who was the -- he is now a retired army colonel and he worked with Colin Powell during the Bush administration. He was the undersecretary to him. And he says, and I quote him, ‘The whole oil spill can be laid at Cheney's feet.'"

Come to think of it, this isn't fair. What is it about oil spills that make liberals more slippery than usual? There, that's better.

HAYES: The very idea of government subsidies runs counter to the libertarian governing philosophy. And yet when they're in power, when conservatives are in power, reflexively pro-business conservatives have no problem with them. They chuck their supposedly principled free-market ideals right under the wagon the first time BP comes calling.

Daily Kos: Gulf Oil Spill Is The Green Lobby's 9/11, to Exploit 'In the Most Cynical, Calculated Way'

From the "Did I Say That Out Loud?" Department: "Crashing Vor" on the Daily Kos asserted on Tuesday morning that a good crisis should never go to waste. The Gulf oil spill must be exploited, and the greens must "use this moment, use the deaths of species and the suffering of people who depend on them, in the most cynical, calculated way, as bad as a Republican after 9/11, to make real, lasting change in how we address the costs of our way of life." That means a command-and-control "climate change" bill. Get it now, before stupid Americans lose interest:

There is only one possible redemption in this horror, and even that is a slim chance.  If the enormity of what has happened in the Gulf can hold the country's atrophied attention long enough, and if we can mobilize fast enough, we might, just might, be able to bring about a positive change from this: 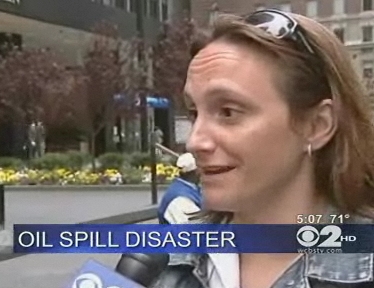 It may have taken over a month, but media outlets are finally beginning to point some accusatory fingers at Barack Obama for his deplorable handling of the Gulf oil spill.

Reporter Marcia Kramer surprisingly answered, "Some in our area think so."

She then interviewed New Yorkers with negative views of how the man currently residing in the White House has handled this crisis (video available here, partial transcript and commentary follow, h/t PoliJAM): 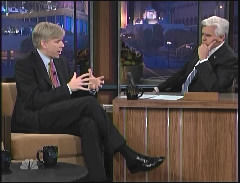 On Monday’s Tonight Show on NBC, Meet the Press host David Gregory appeared as a guest, and, while Gregory seemed to initially defend Tea Party activists against suggestions by Jay Leno that the movement has had a double standard in its treatment of President Bush and President Obama, Gregory also questioned the ability of its members to take part in "governing" as he asked: "How do you have a movement predicated on not governing and then seek to govern?"

Gregory also seemed to agree when Leno asserted that deregulation policies, which he alleged that Tea Party activists endorse, have led to the BP oil spill in the Gulf of Mexico:

JAY LENO: Well, to me, BP is a perfect example. BP seems to have done this on their own. They don't pay attention. They essentially make their own rules because they pay off everybody. That's what the Tea Party wants. That's unregulated and look what happened.

DAVID GREGORY: Right, but in this case, right, you have a breakdown of regulations that led to getting contracts and their technology breaking down. But, right, I mean at some point, the government is the only entity that can clean up after a huge mess...

Below is a transcript of relevant portions of the Monday, May 24, Tonight Show on NBC: 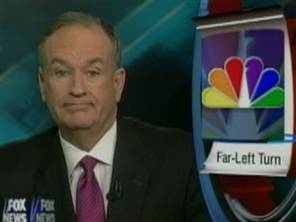 Bill O'Reilly on Monday offered an obviously satirical solution to the Gulf oil spill that has generated some ire from the usual suspects on the left: "stuff every member of NBC News in that hole."

As readers are well aware, the Fox News personality has had an ongoing war with General Electric and its television subsidiary over its dramatic left-leaning approach to covering the news.

With that in mind, while chatting with the folks from Fox & Friends by phone Monday about a variety of issues, O'Reilly made the following tongue-in-cheek remark when the subject of the crisis in the Gulf of Mexico surfaced (video follows with partial transcript): 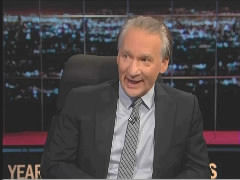 Collating my Friday night tweets on Bill Maher, my nominations for the slimiest, most paranoid and dumbest quotes from Maher on his HBO show, Real Time: 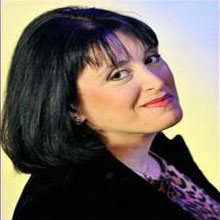 "What the hell is wrong you you people?!"

That's essentially what PBS "To the Contrary" host and US News & World Report contributor Bonnie Erbe wrote in her May 19 Thomas Jefferson Street blog post "Congress Handling the Gulf Oil Spill Crisis Better than Most Americans."

"Although the Gulf spill has lowered the percentage of Americans who support offshore oil drilling, a new Pew Forum poll finds a stunning 54 percent still support it," an incredulous Erbe wrote, adding, "So it will take more than a major, irreversible environmental disaster to persuade gas glugging Americans to trade in their pickups for hybrids. I see."

To Erbe, it can't possibly be that average Americans are more even-keeled than their hot-headed, grandstanding congressmen who would capitalize on a disaster for crass political gain. No, it's that oil-addicted American idiots across the fruited plain just aren't following the example of their betters on the Hill: