"CBS Evening News" anchor Bob Schieffer participated in a phone interview with Bob Steele of the Poynter Institute yesterday. The discussion focused on Schieffer’s view of the current situation in the Middle East and caused Schieffer to pull out an old left wing talking point about war as he lamented:

Kaffiyeh, Or Just Another Cold Day in Madrid for Spanish PM Zapatero? 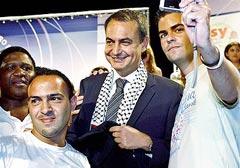 They laughed when I said, here and here, that wearing a Palestinian scarf has become a leftist fashion statement. It was just a cold day on Rockefeller Center, people explained. Well, what do you know? Looks like the cold of Rock Center has made its way all the way to Madrid - and in high summer, no less!

Something very surprising happened on Wednesday: Comedian Bill Maher actually said something positive about America’s current president. Now, in fairness, his statements were written and published at The Huffington Post, which means that maybe only 500,000 people will read them as compared to his larger audience on HBO’s “Real Time.” And, it remains to be seen whether Maher will share such sentiments with his television audience.

However, for those who have watched Maher move further and further to the left over the years – so far so that his current television program seems like an hour-long excuse to bash conservatives – it was quite surprising to read the following: “I have to say, watching George Bush talk about Israel the last week has reminded me of a feeling that I hadn't felt in so long I forgot what it felt like: the feeling of pride when your president says what you want your president to say, especially in a matter that chokes you up a bit. I surrender my credentials as Bush exposer - from the very beginning - to no man, but on Israel, I love it that a U.S. president doesn't pretend Arab-Israeli conflict is an even-steven proposition.”

Shocking to say the least. However, he wasn’t done:

“Hardball” host Chris Matthews was Jay Leno’s guest on “The Tonight Show” Tuesday, and did more Republican bashing than even he usually does (grateful hat tip to Greg Tinti at Outside the Beltway with video link here). One of the first zingers was directed at former Speaker of the House Newt Gingrich. Leno asked Matthews what he thought of Gingrich’s claim on Sunday that what is going on now in the Middle East is World War III. Matthews responded, “I think Newt is World War III.”

A bit later, Leno asked about the recent expletive that President Bush was caught saying to British Prime Minister Tony Blair at the G8 summit, and what Matthews thought about the press feeling that they needed to cut the word out of their broadcasts. Matthews saw this as a great opportunity to swipe at the Bush administration about a totally irrelevant issue: “I wish they'd cut out the 16 words that got us into Iraq, however, but they didn't cut those 16 out.”

The next interesting vignette was when Leno asked Matthews his opinion of Rudy Giuliani. Matthews began with something that will strike many conservatives as the height of hypocrisy:

Heart-rending images of small children being lifted across a fence. Outraged American/Lebanese evacuees alleging indiscriminate Israeli bombing ["they are bombing streets, gas stations, food stores, ranches."] A crying Lebanese man with blood on his shirt after his brother was killed by an Israeli bomb. And the only two reporters on the scene reporting from . . . Beirut. That was the way the 'Today' largely saw fit to cover the Middle East conflict this morning.

While none of the words or images are necessarily inaccurate [and we were treated to one evacuee heartily thanking Pres. Bush], they utterly fail

to tell the whole story. Yes, Israel is militarily superior to its immediate neighbors. So it is easy to portray it as the bully in this fight. But let's look at the larger picture - Israel, a small strip of land, with relatively few people or natural resources, surrounded by hundreds of millions of largely Muslim Arabs in more than a dozen states. Have a look at the map. Israel is a barely discernible dot in the Muslim sea. And just as it is geographically dwarfed so too is it overwhelmed when it comes to natural resources - oil

Take the Anti-Neo-Con Test: Who Said It - Matthews or Buchanan? 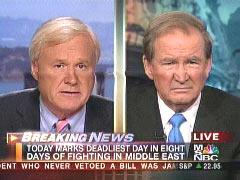 It is axiomatic that the goal of the foreign policy of the United States should be the advancement of the interests of the United States and not of any other country, no matter how sympathetic, including Israel. That said, should it not give Chris Matthews pause that his pointed anti-neo-con spiel has become indistinguishable from the well-rehearsed Pat Buchanan line on the matter? 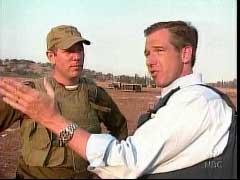 On the same day that a Hezbollah rocket killed two children in Nazareth, Israel, NBC's Brian Williams visited an Israeli Defense Force artillery outpost in northern Israel and noted how the soldiers “don't think a whole lot about where these shells go” in Lebanon and laid a guilt trip on an Israeli officer by predicting how one of his shells will inevitably “kill a six-year old boy.” Williams proposed to the officer: “One of these shells today or tom

NY Times Frets Over 'Asymmetry' in Death Toll for Israel vs. Terrorist Hezbollah

Has Israel already gone too far, waged too successful of a counterattack against an incursion and double kidnapping by the terrorist group Hezbollah?

As the assault on the Syria-and-Iran backed terrorist group goes on over Lebanon, the Times takes a breath and begins to revert to its usual biases.

Last night (Tuesday) on CNN’s Anderson Cooper 360, senior international correspondent Nic Robertson touted his “exclusive” exchange with a Hezbollah propagandist who led Robertson on a tour of a bombed-out block of southern Beirut. Hezbollah claimed to show that Israeli bombs had struck civilian areas of the city, not the terrorist group’s headquarters.

The Hezbollah “press officer,” Hussein Nabulsi, even directed CNN’s camera: “Just look. Shoot. Look at this building. Is it a military base? Is it a military base, or just civilians living in this building?” A few moments later, Nabulsi instructed CNN to videotape him as he ran up to a pile of rubble: “Shoot me. Shoot. This is here where they said Sheikh Nasrallah, the secretary-general of Hezbollah, is living. This is wrong!”

Is CNN correspondent Nic Robertson looking to be the next Peter Arnett? I've been getting tips that this may be the case. They're starting to wonder at Israpundit after watching Robertson uncritically relay a Hezbollah claim that Israel had been targeting civilians.

Looking for Something to Kvetch About, MSM Settles for 'Slow Evacuation'

It's been a tough week for the MSM. You just know they'd like to find a way to spin events in Lebanon and Israel for purposes of criticizing the Bush administration. But one senses they've had a tough time getting traction. Even for our liberal media heroes, making common cause with Hezbollah might be a bridge too far. 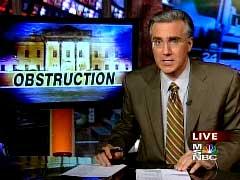 On Tuesday's Countdown show, MSNBC host Keith Olbermann implied that the Senate Judiciary Committee deliberately timed its hearing on the controversial NSA spying program to "bury" the story as the national media attention is focused on war in the Middle East.