On Wednesday, Fox News reported that "a senior law enforcement official" who has since emerged from anonymity told them that Baltimore Mayor Stephanie Rawlings-Blake "gave an order for police to stand down as riots broke out Monday night."

That source, Michael Lewis, currently the Sheriff in Wicomico County and a former Sergeant with the Maryland State Police, appeared on the Norris and Davis show in Baltimore today and repeated his assertion, while adding that the orders included commands to retreat. Those who listen to the interview following the jump will have little doubt that Mr. Lewis is telling the truth, leaving all to wonder how it can be that, from what I can tell, no one in the nation's establishment press at this point has reported what he is saying:

Here is a portion of the related article at CBS Baltimore (bolds are mine; some paragraph breaks added by me):

Sheriff: ‘I Was Sick To My Stomach’ After Being Told To Stand Down

A Maryland sheriff who traveled to Baltimore to help law enforcement stop Monday’s riots told 105.7 The Fan that he was stunned when officers alerted him of the orders to stand down.

Michael Lewis is the Sheriff in Wicomico County, and was also a Sergeant with the Maryland State Police. He joined Ed Norris and Steve Davis on Thursday to talk about the alleged controversial orders the police were given during the riots.

... what shocked him the most, he said, was when city police told him not to confront and accost the rioters.

“I was sick to my stomach like everybody else. … This was urban warfare, no question about it. They were coming in absolutely beaten down. The [city officers] got out of their vehicles, thanked us profusely for being there, apologized to us for having to be there.

They said we could have handled this, we were very capable of handling this, but we were told to stand down, repeatedly told to stand down,” he said. “I had never heard that order come from anyone — we went right out to our posts as soon as we got there, so I never heard the mayor say that. But repeatedly these guys, and there were many high-ranking officials from the Baltimore City Police Department … and these guys told me they were essentially neutered from the start. They were spayed from the start. They were told to stand down, you will not take any action, let them destroy property. 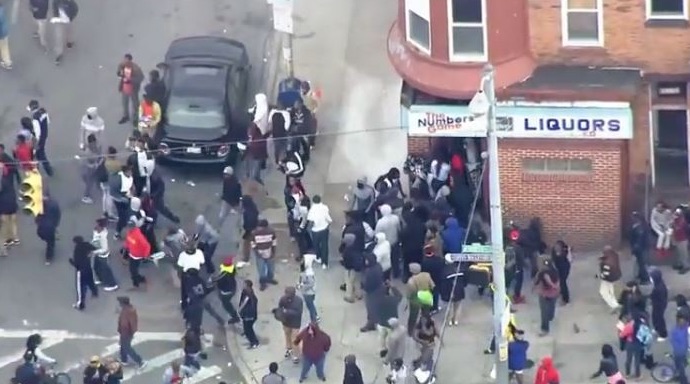 I couldn’t believe it, I’m a 31-year veteran of law enforcement. … I had never heard anything like this before in my life and these guys obviously aren’t gonna speak out and the more I thought about this, … I had to say a few things. I apologize if I’ve upset people, but I believe in saying it like it is.”

Lewis said though he didn’t hear the order to stand down come from the mayor, he did hear it from police officials.

“I heard it myself over the Baltimore City police radio that I had tethered to my body-armor vest, I heard it repeatedly. ‘Stand down, stand down, stand down! Back up, back up, retreat, retreat!’ I couldn’t believe those words. Those are words I’ve never heard in my law enforcement vocabulary,” he said.

“Baltimore City police, all law enforcement agencies are very capable of handling that city. They’re trained to handle that city. These guys were hearing words that had never been echoed in their lives, in their careers.”

Besides the obvious fact that Lewis is directly refuting Mayor Stephanie Rawlings-Blake's claim that no such stand-down order was ever given, Lewis is also contradicting the Mayor's related contention that Baltimore's police didn't have the manpower or firepower to control the crowd.

This pictured Google News search, done at 10:25 Eastern Time this evening, indicates that no one else has picked up CBS Baltimore's story:

Those who listen to the entire audio will hear the hosts and Lewis agree that there should be an investigation, but that they believe one will never happen, largely because the "left-leaning," "not objective" media won't take an interest in learning the truth about the Mayor's actions.