IBD: Obama Tried to Swap For Bergdahl Only After Other Efforts to Release 'Taliban 5' Failed

On Monday, as has been their habit going back at least to the Clinton administration, Investor's Business Daily's editorialists once again broke a story the establishment press likely could have reported years ago.

IBD revealed that the Obama administration "was secretly negotiating the Taliban Five's release without (Bowe) Bergdahl." IBD reasonably believes that coming up with any reason to get the five out of Guantanamo Bay was important to the administration, as it would set a precedent for releasing others from the facility, and eventually emptying and closing it against the will of the majority of Congress, the U.S. military, intelligence officials, and the American people.

IBD's timeline begins shortly after Obama took office. My excerpt picks the presentation up in early 2012: 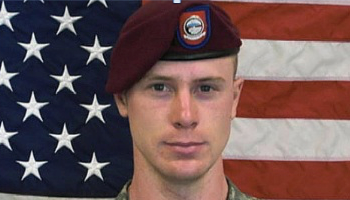 ... IBD has uncovered a series of credible reports from 2012 — as well as a transcript of a candid press conference by then-Afghan President Hamid Karzai — that show the White House originally wanted to give up the Taliban commanders under just one condition: that the Taliban open a political office in Qatar "to conduct peace negotiations." It was Qatar that ended up taking the prisoners.

Bergdahl, who walked off his post and into the arms of the Taliban in June 2009, wasn't even part of the negotiation back then. The original deal was a one-sided release, naked any trade for a "POW" or "hostage" or soldier who allegedly had served "with honor and distinction."

... Jan. 3, 2012: The Taliban announce they are prepared to open a political office in Qatar to conduct peace negotiations in exchange for the release of the Taliban commanders. ("The releases would be to reciprocate for Tuesday's announcement," according to "The [UK] Guardian.")

... Karzai signed on to the deal because he thought it would buy peace and goodwill with the Taliban, which threatened to retake Afghanistan.

The original Taliban Five deal fell apart as Obama met stiff resistance from the U.S. intelligence community. And it proved too politically radioactive to sell to Congress. It was only after U.S. intelligence shot down his amnesty plan as too risky that Obama conjured up the Bergdahl swap.

Truth is, Obama used Bergdahl as a pretext for doing what he always sought to do — empty out Gitmo, national security be damned. The freed Taliban leaders were among the nearly 40 prisoners at Gitmo classified as "indefinite detainees" — too dangerous to release. To shutter the Cuban prison, Obama first had to whittle down that list, starting with the Taliban Five.

His scheme is working as planned, as one dangerous detainee after another is freed on the argument that the Taliban Five set a precedent for the release of others. The recent release of al-Qaida assassin Muhammad al-Zahrani, for one, was based on that precedent. "We have demonstrated that Mr. al-Zahrani represents a lower threat than the (Taliban) detainees that have been released," his defense team argued.

Obama also had several chances to rescue Bergdahl on the ground, but he reportedly ignored them all. Why? He wanted a terrorist trade to help close down Gitmo. Don't be fooled: This is what Bergdahl was all about.

Corroborating IBD's final-paragraph claim, on June 4, 2014, days after Bergdahl's release, a report from another source which routinely scoops the U.S. press — the UK Daily Mail — reported that "The Obama administration passed up multiple opportunities to rescue Sgt. Bowe Bergdahl because the president was dead-set on finding a reason to begin emptying Guantanamo Bay, Cuba, according to a Pentagon official."

How is it that an editorial page whose writers are based in Los Angeles and a UK tabloid can uncover and expose things that the hordes of national security and other establishment press reporters "somehow" can't? (Note that no one has come out and disputed either outlet's report.)

Why shouldn't I believe that the rest of the press has known these things for some time, but simply decided not to report them — perhaps because they also think that emptying Gitmo is also a simply marvelous idea?