On the morning Gov. Scott Walker announced on social media he would run for president, The New York Times was comparing him to Sarah Palin as not the deepest, most intelligent contender.

Somehow, “admiring voters” are deployed against Walker as not thinking of the word “smart” first in describing him. Reporter Patrick Healy began his front-page story: 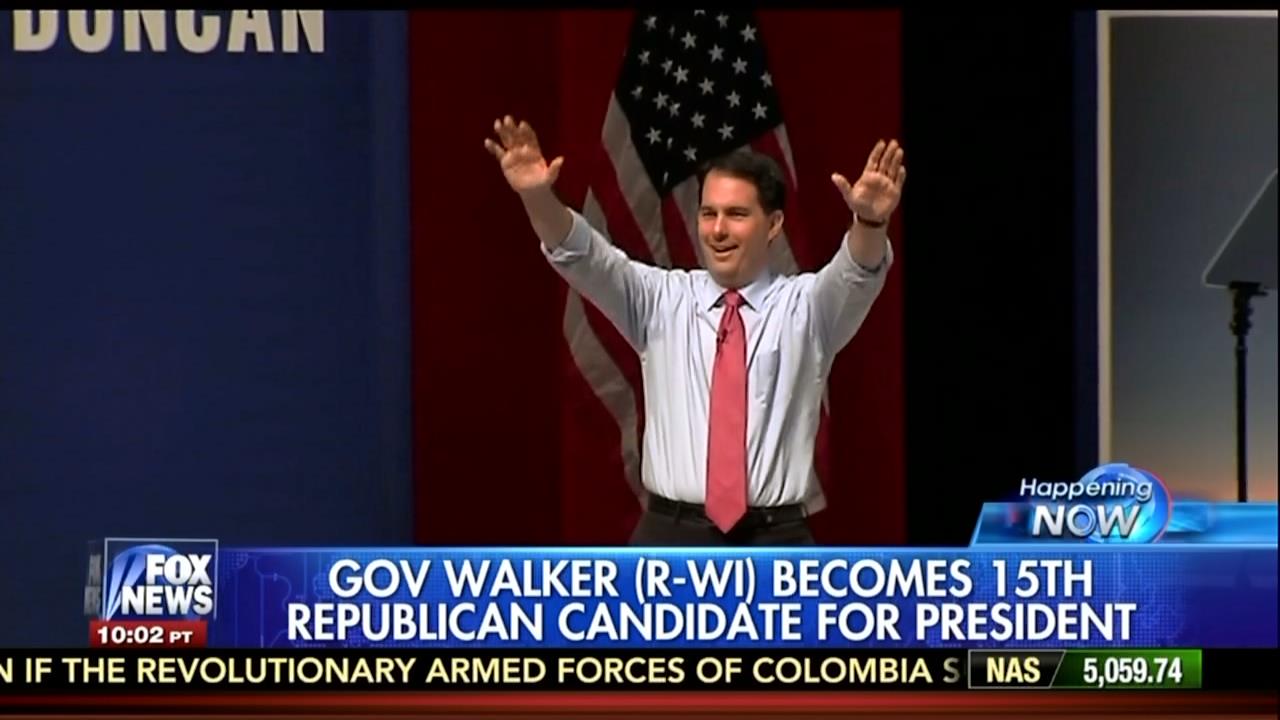 After listening to Gov. Scott Walker of Wisconsin as he has traveled the country preparing his campaign for president, which officially begins on Monday, admiring voters most often describe him as “authentic,” “real” and “approachable,” Mr. Walker’s advisers say.

Two words these voters do not use about him? “Smart” and “sophisticated.”

On the day Barack Obama announced he was running for president – February 10, 2007 – the Times ran a front-page story from Mark Leibovich that wasn’t really about Obama, just the “stutter-step” process of announcing for president.

Healy compared Walker to Palin because he’s doing tutorials. Let’s try searching the Times for “Obama” and “tutorial” in the six months after he announced. It only comes up – typically – in a slavish boost of Obama’s basketball exploits. Jodi Kantor reported on June 1, 2007:

Basketball has little to do with Mr. Obama's presidential bid -- in fact, he has trouble finding time to shoot baskets anymore -- but until recently, it was one of the few constants in his life.

At first, it was a tutorial in race, a way for a kid with a white mother, a Kenyan father and a peripatetic childhood to establish the African-American identity that he longed for. In ''Dreams From My Father,'' Mr. Obama described basketball as a comfort to a boy whose father was mostly absent, and who was one of only a few black youths at his school. ''At least on the basketball court I could find a community of sorts,'' he wrote.

Craig Robinson, Mr. Obama's brother-in-law, said: ''He didn't know who he was until he found basketball. It was the first time he really met black people.''

While Mr. Walker is ahead in some opinion polls, including for Iowa’s first-in-the-nation caucuses, a series of early gaffes alarmed party leaders and donors and led Mr. Walker to begin several months of policy tutorials. The collective hope is that Mr. Walker can avoid what Mr. Goeas and other advisers describe as Sarah Palin’s problem — becoming a candidate who is initially popular among Republicans, like the 2008 vice-presidential nominee, but loses luster because of missteps as the campaign goes on.

Mr. Walker is now emerging from his crash course with the aim of reassuring activists and contributors, who have given relatively modest amounts to his political operation so far. The goal is to no longer sow doubts with comments like comparing pro-union protesters to Islamic State terrorists, refusing to answer a question about evolution, or saying he does not know if President Obama is a Christian or if he loves America.

Whether Mr. Walker can demonstrate that he has a command of the challenges facing America, and is big enough for the presidency, will be tested in the coming weeks on the campaign trail and in televised debates.

Notice how it’s somehow a misstatement not to make a statement about evolution. If failing to answer a journalist’s question is defeined as a gaffe, then media-phobic Hillary Clinton is the most gaffe-tastic candidate in the race.

But the concerns about Walker’s “breadth and depth” continue:

Concerns about the breadth and depth of Mr. Walker’s knowledge extend to both national security and domestic policy issues.

Two Republicans recalled being at a closed-door event last winter when, they said, Mr. Walker did not articulate a strong answer to a question about Internet neutrality, instead promising to look at the issue. Others questioned his sophistication in boiling down national security challenges to matters of “safety”; he believes people relate to that word, whereas “national security” is an elitist phrase.

And his repeated comments that the most important foreign policy decision of his lifetime was President Ronald Reagan’s firing of air traffic controllers in 1981, because it got the attention of the Soviet Union, was a sign to some Republicans that Mr. Walker, who dropped out of Marquette University and has not traveled widely abroad, has a limited worldview.

Condi Rice leads group of advisers "whose mission is to prove that Mr. Bush has enough global brainpower to be president....Ms. Rice is closest by far to Mr. Bush, whom she is leading in a grand global tutorial as she tries to convince others that what he lacks in international knowledge and experience he makes up for in what she calls "good instincts."