Washington Post religion reporter Michelle Boorstein relayed on Saturday that Reform Judaism is revising their prayer book, and there are some doozy additions. They are the "vanguard" of American religion. The Post pulled out this shocker:

One Post headline was “Avant-gardism for Reform Judaism.” Another headline could be “Religion evolves into rejecting God as....important, or special.” Instead, they proclaim:

BELOVED FRIEND
who calls us to conscience,
reminds us of our own strength,
invites us to grow,
empowers us to act.
Cosmic mysteries are yours,
but the earth is ours
to tend and heal as best we can.
Beloved partner in creation,
we join our strength with Yours
to make You real and true.

Is God a majestic king on a throne with unbounded power or a “beloved friend and partner”? A “He” or a “Holy Presence who spreads Her wings over you”? Does God even exist?

There’s a range of options on each two-page spread of the new version of American Judaism’s best-selling prayer book, which was just released by the Reform Movement — the faith group’s largest denomination.

The text will be used during the fall High Holidays of Rosh Hashanah and Yom Kippur, an intense liturgical period of reflection for many American Jews. The first overhaul of the book in 40 years was unveiled this month.

The new book includes gender-neutral blessings for transgender people, changing “bride and groom” to “couples” in an effort to be LGBT-friendly and weaving Pablo Neruda, Langston Hughes and Henry David Thoreau with the Old Testament.

As she explained, Reform Judaism is the largest denomination in the U.S., with 35 percent of Jews identifying as Reform. Boorstein then brought in a D.C. rabbi to explain that this is a natural evolution for Jews into secularism, as if the concept of a sovereign, almighty God can survive the transition:

In its attempt to inspire [or pander to?] a diverse, liberal faith community with a complicated relationship to prayer, Reform Judaism is a pioneer among liberal denominations in adapting ancient texts to engage increasingly mainstream topics, including gay equality, interfaith families and doubt. 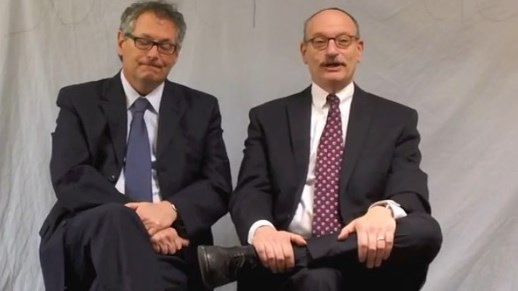 Rabbi Daniel Zemel [pictured at right] of Temple Micah in the District’s Glover Park neighborhood, said the new High Holidays text — titled Mishkan HaNefesh in Hebrew, or “Sanctuary of the Soul” — addresses important trends in the evolution of the faith.

“What rabbis have had a long time coming to grips with is that Jews are a prime example of people who live and feel their lives to be secular. And our basic texts were written by people who took God’s existence for granted,” Zemel said. “That is the defining issue of our age.”

Most houses of worship have not addressed topics reflecting the increasing secularization of American society in their main texts, often because they disagree with the associated views. But some liberal faith groups are experimenting, primarily by including such views in printed supplements.

Then Boorstein turned to another liberal, experimenting faith group: Rev. Ruth Meyers of the Episcopalian Church, who revised the Book of Common Prayer, but no eye-opening quotes were included.