In his "Critic's Notebook" on the front of Thursday's Style section, 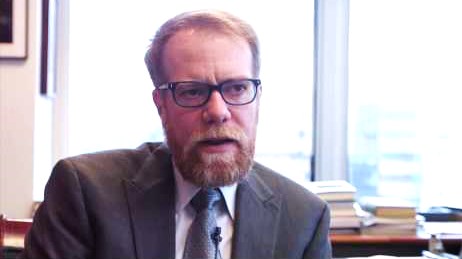 art critic Philip Kennicott descended into another rant suggesting the United States is barely more moral than Islamic State beheaders. Americans are not a good people; we are a horrible people, ruthless and then cluelessly patriotic.

The headline was "Senate report's real question: Who are we? Gauzy view of American goodness can't survive revelations of torture." This has almost nothing to do with art. He began:

Our belief in the national image is astonishingly resilient. Over more than two centuries, our conviction that we are a benign people, with only the best of intentions, has absorbed the blows of darker truths, and returned unassailable. We have assimilated the facts of slavery and ethnic cleansing of Native Americans, and we are still a good people; we became an empire, but an entirely benevolent one; we bombed Southeast Asia on a scale without precedent, but it had to be done, because we are a good people.

Even the atrocities of Abu Ghraib have been neutralized in our conscience by the overwhelming conviction that the national image transcends the particulars of a few exceptional cases. And now the Senate torture report has made the unimaginable entirely too imaginable, documenting murder, torture, physical and sexual abuse, and lies, none of them isolated crimes, but systematic policy, endorsed at the highest levels, and still defended by many who approved and committed them.

In Kennicott’s world, every American war criminal from LBJ to George W. Bush has never been punished, so we are irredeemable. When it came to the Senate report, “The blow to the U.S. reputation abroad was seen as equally newsworthy as the details themselves, and the appalling possibility that there will never be any accountability for having broken our own laws, international law and the fundamental laws of human decency.”

The idea of a national image as essentially like a marketplace is an appealing one, especially in a country so in love with the market, so convinced they always rise, always recover, always recalibrate. America is always right, and markets are always right, so any deviation from a high-value assessment of the American brand is necessarily temporary. This conviction helps us keep at bay the thought that in many parts of the world, the national image includes scenes of waterboarding, of Americans smashing heads, forcing men to stand on broken limbs, killing by hypothermia and “rectal feeding,” which is rape.

Kennicott argues that we think of ourselves as unnoticing, unaffected communities and families with warm feelings about our national rituals, but that’s a lie: "But that is not at all who we are. As long as the crimes done in our name remain unpunished, they remain our crimes. The lives we love — as many apologists for torture now openly claim—are purchased at the cost of extreme violence and brutality perpetrated on other people, many of them innocent, none of them deserving of torture."

Then comes Kennicott’s argument that we’re barely better than ISIS:

We have come to a critical moment in the debate about torture. It’s no longer possible, as it was when the images of Abu Ghraib emerged in 2004, to pretend that these events were rare, exceptional or the work of a few rogue agents. Nor will it be easy to assimilate them into that beloved average image of our national goodness. We are confronted with our own barbarity, as we have been confronted with the barbarity of the Islamic State. We torture, they behead. We beat men senseless, slam their heads into walls, strip them naked and leave them to die, while they march men into a field and put bullets in their heads. We might still cling to the idea that our crimes are not quite so bad as theirs. But to quibble over the degree of cruelty we tolerate is to acknowledge that cruelty is now standard practice. Unless we punish the guilty, we can have no more illusions that there is anything fundamental about who we are, how we are governed or what religion we practice, that distinguishes us from the worst in the world.

Kennicott sees only impunity, no punishment of the “guilty,” no acknowledgment of any need for self-defense or intelligence-gathering from hostile Islamic radical terrorists or their sympathizers who we interrogate. A “moral revolution” from the radical left is the only solution, and for Americans to have an “honest” (that is, horrific) view of our own war crimes:

If no one in public life is capable of punishing the guilty, if nothing comes of this but more denials and obfuscations, if the CIA is indeed more powerful than the president, the Congress and the Constitution, what is left of our beloved and benign national image?

Moral revolution begins at home, with a revolution in one’s own values. If you are horrified by what has happened, then you must remake your own mental picture of America, in yourself, in your own mind, ruthlessly and mercilessly, until it conforms to the truth of who we are. The first duty is not to look away.

But the crimes are so horrible, the injustice so vast, that it must go further than that. We should take our cues from a species of painting made throughout the Renaissance, vanitas images, which were a type of still life laden with reminders of death: skulls and hourglasses, guttering candles and fruit going bad. Vanitas elements, which also occurred in other kinds of paintings, reminded the living of the inexorable fact of death and Christians of the inevitable day of judgment. They compelled the faithful to see the skull always under the skin.

We are all, to some degree, narcissists, in love with our lives. But we must re-envision those lives with the hard truth of vanitas paintings. We must have the discipline to see the extent of our national depravity. We must bring it home to the very texture of the lives we lead. When you look at your children, remember dead children, torn to shreds by our smart bombs. When you sit by a warm fire, remember the windowless dungeons we made to break our enemies—and not infrequently innocent men accidentally caught up in our wars. When you fall asleep in your bed, remember the sleep deprivation “for up to 180 hours, usually standing or in stress positions, at times with their hands shackled above their heads.” [Bolded part appeared in a pull quote in the newspaper.]

If you can, if only for a day, or an hour, let every comforting thought be infected with the truth of what we have done.