President Donald Trump tweeted an edited video that showed Speaker of the House Nancy Pelosi repeatedly tearing up the State of the Union speech, with other clips of the president’s successes pieced in the video.

Democrats were outraged. “The latest fake video of Speaker Pelosi is deliberately designed to mislead and lie to the American people,” said Pelosi’s deputy chief of staff, Drew Hammill. “[E]very day that these platforms refuse to take it down is another reminder that they care more about their shareholders’ interests than the public’s interests.” 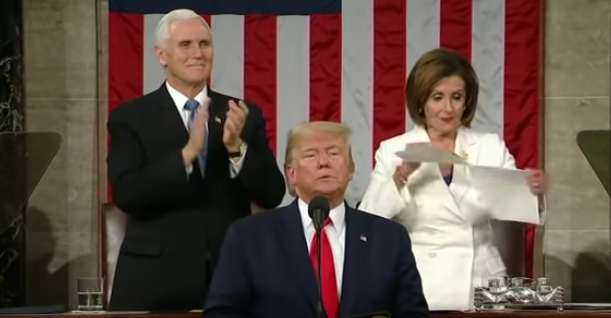 KCBS political reporter Doug Sovern wrote on Twitter that the video “sure appears to violate @Twitter's new ban on videos that are fabricated or altered to mislead.” The New York Times reported that Hammill “demanded that the video be removed.”

Bloomberg reporter Kurt Wagner argued, “This edited video, which makes it look like Nancy Pelosi is is disrespecting U.S. service members, is the *perfect* example of a video that Twitter should label under its new ‘manipulated media’ policy.”

Neither Twitter nor Facebook removed the video, despite Hammill’s request. Facebook communications staff Andy Stone replied to Hammill on Twitter, saying, “Sorry, are you suggesting the President didn't make those remarks and the Speaker didn't rip the speech?”

Trump campaign spokesperson Tim Murtaugh told The Times: “If Nancy Pelosi fears images of her ripping up the speech, perhaps she shouldn’t have ripped up the speech.”

Turning Point USA’s chief creative officer Benny Johnson wrote a defense for the video, created by his team, in Newsweek, saying, “The video included no deep fake technology, no motion graphics, no footage or audio from other events.” He continued, “If our video is ‘doctored’ and ‘manipulated,’ then literally every minute of every entertainment, sports and political media has been doctored and manipulated as well.”