Brianna Keilar, to Interview Hillary, Fawned Over Her at Chipotle: 'She's Just Like Us'

It was announced on Monday that Hillary Clinton's first national TV interview will go to CNN's Brianna Keilar, a journalist who previously fawned over the Democrat's appearance at Chipotle. Keilar also attended the wedding of a top Clinton aide two weeks ago.

On April 14, Keilar hyped, "Yesterday [Mrs. Clinton] stopped at a Chipotle, a campaign aide sharing with us that she had a chicken burrito bowl with black beans and guacamole and an iced tea. And you know what that kind of detail tells you — it says, ‘She's just like us. She eats at Chipotle.'"

She eats at Chipotle? She's just like us? Is this journalism?

On May 14, 2014, Keilar praised Bill Clinton's defense of his wife against attacks by Karl Rove, "To do it with humor was effective. I thought it was effective."

In June of 2015, Keilar attended the wedding of a top Clinton aide. Mediaite on Monday reported: 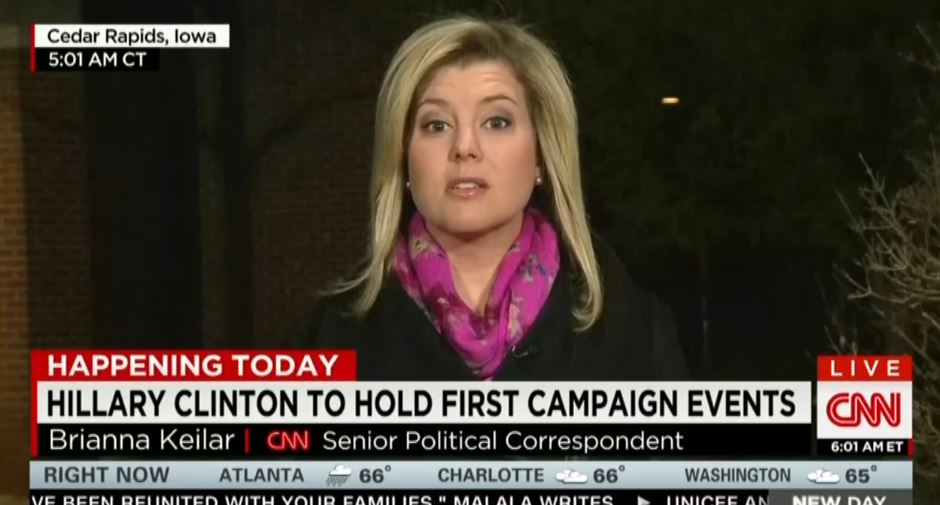 During the wedding of Adam Parkhomenko (Clinton’s current Director of Grassroots Engagement) and Kirby Hoag (Ready for Hillary’s deputy operations director), a former staffer tweeted a photograph of the journalists in attendance. Keilar, who will interview Clinton on Tuesday.

In 2007, Keilar cheered an attack by a liberal senator against conservative Jim Inhofe:

Co-anchor Brianna Keilar: “That was quite an exchange. And, you know, we were expecting something from Senator James Inhofe. He is a critic of global warming....We thought maybe it might be with him and former Senator, former Vice President Al Gore, but it ended up between him and Senator Barbara Boxer. She really got a stinger in there, I will say.”
-- CNN’s Newsroom, March 21, 2007, after the liberal Boxer told former GOP Chairman Inhofe, “You don’t do this anymore. Elections have consequences.”

The interview of Clinton will first air on Tuesday's edition of The Situation Room at 5pm.