Stephanopoulos Flashback: 'There Is Hope' Donations Will 'Lead to Something'

Even as he apologized on Friday for donating $75,000 to the Clinton Foundation, George Stephanopoulos tried to spin the contributions as innocent, swearing, "I have made substantial donations to dozens of charities, including the Clinton Global Foundation... I made them strictly to support work done to stop the spread of AIDS, help children and protect the environment in poor countries."

Yet, on April 28, when the general public and his bosses were unaware of the donations, Stephanopoulos told a very different story. Talking to Jon Stewart on The Daily Show, he admitted, "But everybody also knows when those donors give that money, President Clinton or someone, they get a picture with him. There is a hope that is going to lead to something."

Stephanopoulos warned, "That's what you have to be careful of."

Exactly. That's what you have to be careful of.

A partial transcript of the April 28 Daily Show segment is below: 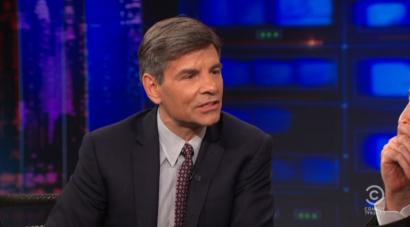 GEORGE STEPHANOPOULOS: I read the book that this is based on Clinton Cash and I actually interviewed the author on Sunday. This is a tough one. Because when you actually look at, look closely at it, he even says there is no evidence of any direct action taken on behalf of the donors.

STEPHANOPOULOS: But everybody also knows when those donors give that money, President Clinton or someone, they get a picture with him, there is a hope that is going to lead to something.

STEPHANOPOULOS: And that's what you have to be careful of.

STEWART: My point is though – So there is an industry around this. A book is written. The guy comes on your show.  He does a bunch of interviews. He does a bunch of interviews and they all talk about the scandal of these few millions of dollars and what it might have led to. In the same breath she announced "I am going to raise $2.5 billion dollars" and everybody was like, "She is serious." Now, what does that money buy?

STEPHANOPOULOS: What do you think people are getting for that money? Absolutely.

STEWART: So I don't understand this idea. The entire system appears to be shrouded in that type of quid pro quo or the appearance.

STEPHANOPOULOS: Even if you don't get any action, what you get is access and you get the influence that comes with access and that got has to shape the thinking of politicians.

STEPHANOPOULOS: I think that is what's so pernicious about it.