Chris Matthews: It's Fine to Question Republicans' Patriotism, But Not Obama's!

An outraged Chris Matthews on Thursday railed against Rudy Giuliani's assertion that Barack Obama doesn't "love America." The cable anchor assailed the idea that anyone's patriotism would be questioned. An odd assertion from an MSNBC host as they do it quite often. A wounded Matthews howled, "They're saying [Obama] doesn't love America!"

The Hardball anchor lectured Giuliani: "But Mr. Mayor, you should never go after someone's love of his country. It breaks the rules we live by. It divides us when we should be united. I urge you to take it back." Yet, on January 21, 2009, the same Matthews sneered, "Does Rush Limbaugh hate this country? Wait till you hear what he said about the new president."

On July 13, 2011, Matthews questioned the patriotism of media mogul Rupert Murdoch, wondering if the conservative was a "real American" or if he "become a citizen just like somebody marries somebody to get into the country because they want a job." 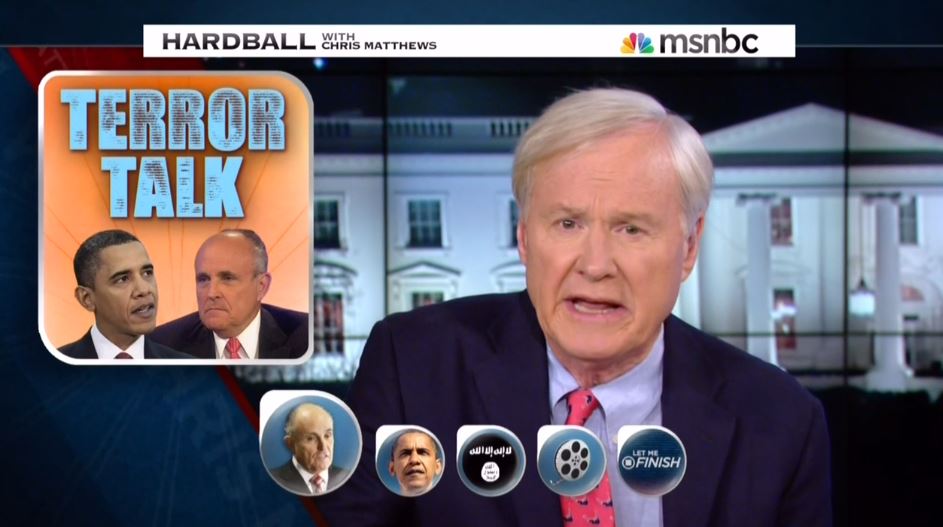 On June 2, 2014, Matthew's colleague, Ed Schultz, questioned the patriotism of a conservative senator, snarling, "There's nothing American about Ted Cruz."

Clearly, Matthews and the hosts at MSNBC are in no position to judge Rudy Giuliani (or anyone else's) statements on this issue.

A partial transcript of the February 19 segment is below:

MATTHEWS: And that's the charge out there, that the president of the United States doesn't love his country. And it's coming from the man who proudly carries the title "America's mayor." What's hitting us in the news right now tonight are birthers like Donald Trump who say President Obama was secretly born in Africa and smuggled here to bring down the country, now joined by those who say Barack Obama lacks a true loyalty to Western civilization. Is this how we face the danger from ISIS and other terrorists, by dividing between those who claim a deep commitment to this country and those who argue others do not? Is this how we forge a strong America in reaction to the horror of beheadings and burnings alive, by dividing ourselves?

Let's find out tonight what Rudy Giuliani is getting at here. What deep vein in the country's psyche does this president fail to touch for him? What gut expression of Americanism is Barack Obama failing to give us?

Well, Howard Dean was chairman of the Democratic National Committee and Michael Steele was chairman of the Republican National Committee. Both are MSNBC political analysts. Anyway, last night, while speaking to a group of conservatives in New York City, Rudy Giuliani unloaded on President Obama's handling of terrorism. He said, "I do not believe -- and I know this is a horrible thing to say, but I do not believe that the president loves America. He doesn't love you. He doesn't love me. And he wasn't brought up the way you or I were brought up, to love this country of ours."

MATTHEWS: Let me finish tonight with this tough, unnecessary and wrong attack by Rudy Giuliani on our president. All of us have different temperaments. Look, I can remember when Senator Barack Obama was 20 points behind Senator Hillary Clinton in the early run for president. I kept getting anxious and frustrated, and, OK, angry because he didn't seem as angry, frustrated, and angry as I was by his position so far behind. Rudy Giuliani says that Obama doesn't love his country, like he does, like others he knows do. I can understand what I'm getting at, this coolness the president gives off. He's not a hot head like Rudy or me sometimes. He just isn't. I remember when he got hammered in that first debate with Mitt Romney. He didn't know he was being humiliated. Didn't he know he was letting that man's sense of personal superiority beating him up on national television. That was another time when I went hot and Obama went cool. But like all the other times, Obama did what he had to do. He and his team defeated, the undefeatable Hillary Clinton and her team. He came back to beat Mitt Romney twice in debates, clearing the way for his convincing re-election as president. So, I can see why a guy like Rudy would think Obama's too cool for school. But Mr. Mayor, you should never go after someone's love of his country. It breaks the rules we live by. It divides us when we should be united. I urge you to take it back and quickly, because it really does no good at all, except score political points with those who hate.