NBC and ABC on Friday gushed over a new video of the President taking selfies and making silly faces in order to promote ObamaCare. Only CBS This Morning wondered if the President was diminishing the office. Good Morning America's Amy Robach parroted the White House spin as just another fun, viral video. The journalist enthused, "Trending this morning, the President is presiding on Facebook with an unprecedented video from Buzzfeed with more than 20 million views in less than a day."

Unprecedented? At no time did Robach offer any skepticism. Instead, she extolled, "It's all to encourage young people to register for health care, but in a very creative way. Let's take a look at some of the video." On Today, Tamron Hall hyped, "The President actually paired with BuzzFeed creating the video that is captivated the internet."

Savannah Guthrie, rumored as a possible Nightly News replacement for Brian Williams, lauded, "They're going for that younger audience, but two million [views] in an hour. Take that, cat video!"

It was left to the more serious journalists of CBS This Morning to call the internet footage "controversial." Jeff Glor noted that "critics believe the video comes at a bad time." Reporter Julianna Goldman explained that "pundits were quick to criticize the timing of Thursday's video following the death of 26-year-old ISIS hostage Kayla Mueller." 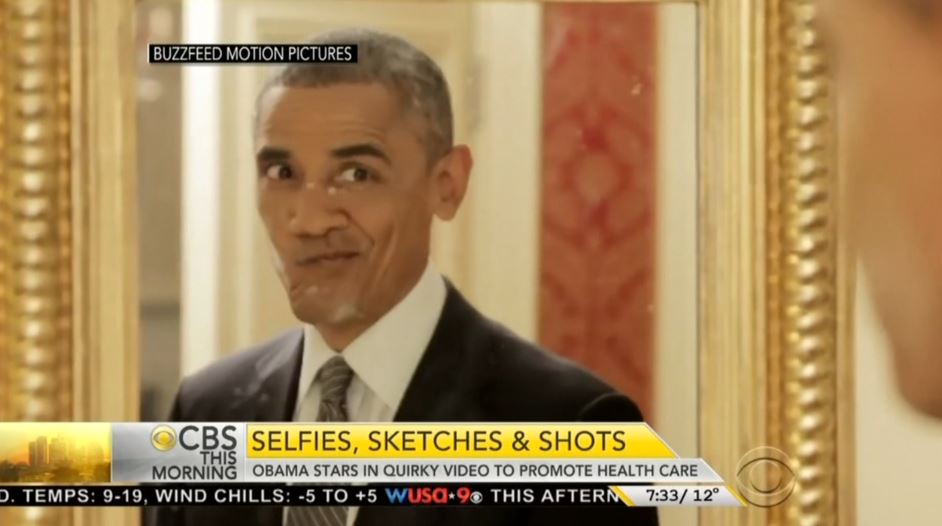 CBS This Morning's hosts went so far as to feature a clip of National Review writer Jim Geraghty. The conservative journalist derided:

JIM GERAGHTY (National Review): You know who else sees [the video]? The rest of the world, all right? You know? Do you think ISIS is quaking in their boots knowing that the President makes goofy faces in the mirror?

On March 11, 2014, the networks swooned over Obama's fake interview with Zach Galifianakis to promote ObamaCare. Today's hosts rhapsodized that the interview was "really, really funny" and "amazing."

A transcript of the February 13 GMA segment is below:

GEORGE STEPHANOPOULOS: Now, let's go to Amy in the social square with the speed feed. 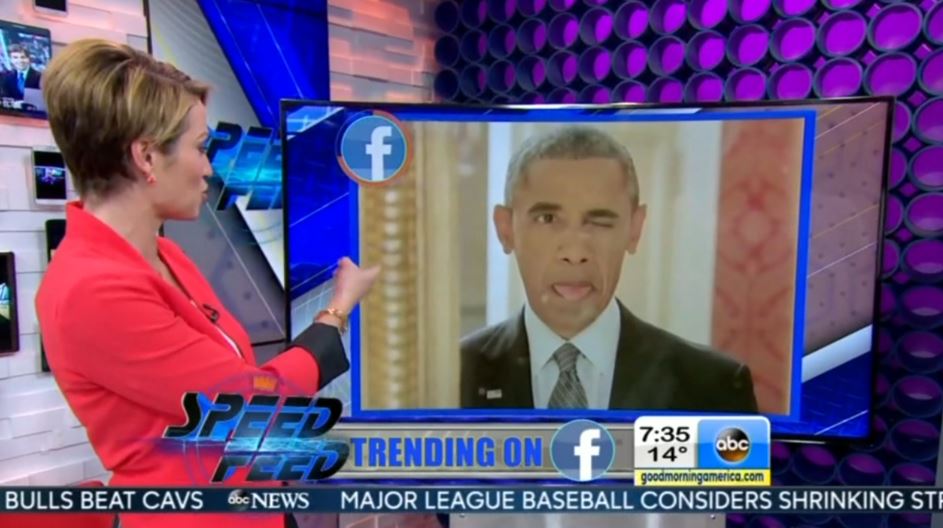 AMY ROBACH: All right. Good morning, guys. Trending this morning, the President is presiding on Facebook with an unprecedented video from Buzzfeed with more than 20 million views in less than a day. The video is called "things everyone does but doesn't talk about."

And take a look as you can see from this shot, yes, the President like we've never seen him before. It's all to encourage young people to register for health care, but in a very creative way. Let's take a look at some of the video. A little mirror time. Yep. There he goes. Straightening his tie. Taking some selfies as well. We've got that. Yep, with the selfie stick no less. Oh, yes, big smile. Crazy face.

Then a pretty impressive picture of the First Lady. He also practiced hoops in the oval office and I figured if it was good enough for the president -- this is my first time with a selfie stick. I don't even know how you do it. It's good enough for me. There we go. Woo. Tell us what's moving up in your feed with the hash tag #socialsquare. You guys, you know you do it, too. Right? Just like the President.