Ed Schultz clearly doesn't listen to Ed Schultz. The MSNBC anchor, who once compared Rush Limbaugh to Hitler, on Tuesday decried a Hitler comparison for Barack Obama. Schultz railed against a tweet by Republican Congressman Randy Weber about the White House not sending a representative to Paris for the anti-terror rally.

Weber joked, "Even Adolf Hitler thought it more important than Obama to get to Paris." The anchor snarled, "This congressman should have better judgment than to associate any president of the United States in the same sentence or same vein or in any comparison whatsoever with Adolf Hitler."

He continued, "No Congress and no elected official should ever do that to any sitting president!"

This is the same Ed Schultz to insisted that Limbaugh "looks just like Adolf Hitler." On March 2, 2009, he assailed:

Ed Schultz: It's kind of like the way Rush brought it to CPAC over the weekend, about how, you know, how interesting he was."

Clip of Rush Limbaugh at CPAC, accompanied by audio of Adolf Hitler and cheering Nazis: "I want Barack Obama to fail if his mission is to restructure and reform this country so that capitalism and individual liberty are not its foundation. Why would I want that to succeed?"...

Schultz:  Now if you watch Limbaugh with the sound down, the drugster, he looks like Adolf Hitler! His animation is amazing! It's, the parallel is so striking. And then, of course, Rush is now the angry American. The angry American. And that's where they are. They are so out of touch, just like Hitler was out of touch. But he was mesmerizing. So, I think it was comical. I think there are parallels drawn by some of the things Hitler was saying and some of the things that were at the CPAC convention. They are not Americans. They don't care about the greater good of society.

Apparently, it's only wrong to compare some people to Hitler.

A transcript  of the January 13 segment, which aired at 5:03pm ET, can be found below: 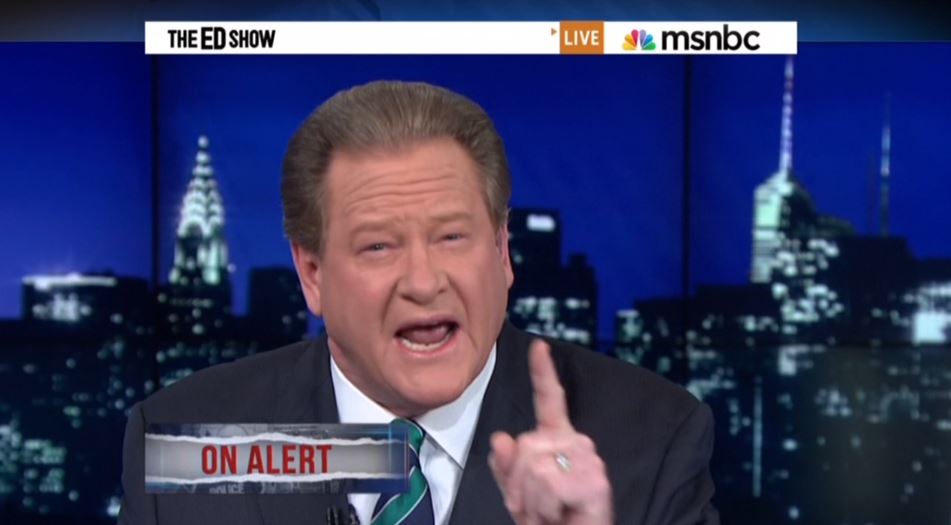 ED SCHULTZ: Meanwhile, here at home, criticism continues to mount on the White House. Many are upset the United States did not send any high ranking officials to Sunday's mass anti-terror rally in Paris. But Republicans are taking criticisms to, I think, a disturbing new level. Congressman Randy Weber, for whatever reason, of Texas tweeted this out, "Even Adolf Hitler thought it more important than Obama to get to Paris, for all the wrong reasons" – in parenthesis. "Obama couldn't do it for the right reasons." Well, the Congressman from Texas apologized today via Twitter and I think it isn't enough. It reads in part: "I need to first apologize to all those offended by my tweet. It was not my intention to trivialize the Holocaust or compare the President to Adolf Hitler. The mention of Hitler was meant to represent the evil, the face of evil that still exists in the world today. I now realize –" he now realizes–  "the use of Hitler invokes pain and emotional trauma but those affected by the atrocities of the Holocaust and victims of anti-Semitism and hate."

There seems to be a different standard for Republicans when it comes to insulting remarks like this. This congressman should have better judgment than to associate any president of the United States in the same sentence or same vein or in any comparison whatsoever with Adolf Hitler. Does he not know what happened back in World War II? Does he not know that there is a museum not far from where he works that honors those who died in the Holocaust. An apology, congressman. Not on Twitter. Call the President of the United States. Go to the floor. Go to the well of the United States House. Go to the people's house and do some restitution so we all know that you have got your head screwed on right! No Congress and no elected official should ever do that to any sitting president! But the Republicans have a different standard. If Democrats do something – and I"m going to politicize – If Democrats do something wrong, you have pundits out all over the place calling for people's jobs, calling for restitution, calling for apologies. But a Republican Congressman from Texas – just put it out on Twitter and tell people that you now realize that it was the wrong thing to do. And you're sorry if you offended those people out there. Just a few people?