Fire Brian Williams for Stealing Valor From Our Brave Servicemen

After 12 years, Brian Williams is coming clean, admitting the helicopter he traveled in during NBC's coverage of the 2003 Iraq invasion never once came under fire, despite Williams' many repetitions of a lie claiming it did.

According to The Hollywood Reporter on Jan. 30, NBC Nightly News posted a video of Williams to Facebook, in which Williams recounts the false story during a news segment. Williams references "a terrible moment a dozen years back during the invasion of Iraq, when the helicopter we were traveling in was forced down after being hit by an RPG."  (You can watch the video by clicking play on the embed below.)

A Facebook user by the name of Lance Reynolds, who claimed to have been serving in Iraq during the incident in question, subsequently commented on the video, writing, "Sorry dude, I don't remember you being on my aircraft." 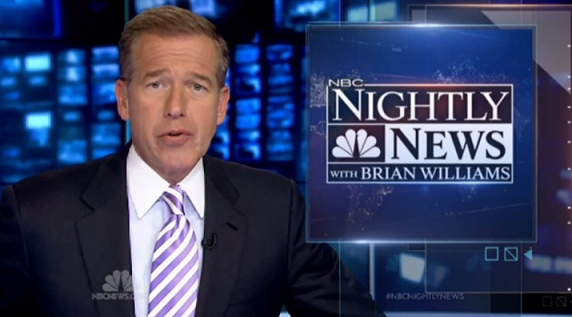 Reynolds added, "I do remember you walking up about an hour after we had landed to ask me what had happened. Then I remember you guys taking back off in a different flight of Chinooks from another unit and heading to Kuwait to report your 'war story' to the Nightly News."

Willams responded to the comment via his verified account, writing, "To Joseph, Lance, Jonathan, Pate, Michael and all those who have posted: You are absolutely right and I was wrong.

"In fact, I spent much of the weekend thinking I'd gone crazy. I feel terrible about making this mistake, especially since I found my OWN WRITING about the incident from back in '08, and I was indeed on the Chinook behind the bird that took the RPG in the tail housing just above the ramp,” Williams later confessed.

According to Stars and Stripes Williams and his camera crew were actually aboard a Chinook in a formation that was about an hour behind the three helicopters that came under fire, according to crew member interviews.

That Chinook took no fire and landed later beside the damaged helicopter due to an impending sandstorm from the Iraqi desert, according to Sgt. 1st Class Joseph Miller, who was the flight engineer on the aircraft that carried the journalists.

“No, we never came under direct enemy fire to the aircraft,” he said Wednesday.

The helicopters, along with the NBC crew, remained on the ground at a forward operating base west of Baghdad for two or three days, where they were surrounded by an Army unit with Bradley fighting vehicles and Abrams M-1 tanks.

Miller said he never saw any direct fire on the position from Iraqi forces.

The claim rankled Miller as well as soldiers aboard the formation of 159th Aviation Regiment Chinooks that were flying far ahead and did come under attack during the March 24, 2003, mission.

Crew members on the 159th Aviation Regiment’s Chinook that was hit by two rockets and small arms fire told Stars and Stripes that the NBC anchor was nowhere near that aircraft or two other Chinooks flying in the formation that took fire. Williams arrived in the area about an hour later on another helicopter after the other three had made an emergency landing, the crew members said.

One of the helicopters was hit by two rocket-propelled grenades — one did not detonate but passed through the airframe and rotor blades — as well as small arms fire.

“It was something personal for us that was kind of life-changing for me. I know how lucky I was to survive it,” said Lance Reynolds, who was the flight engineer. “It felt like a personal experience that someone else wanted to participate in and didn’t deserve to participate in.”

Williams began his apology tour in an interview with Stars and Stripes, where he said he had misremembered the events and was sorry.

Except this isn’t “misremembering the events” this is a 12-year record of just plain lying.

Why would Williams do such a dishonorable thing?

Well, one reason might be the one that you can find in this video Breitbart’s John Nolte turned up of Brian Williams appearing on the Tonight Show with David Letterman.

You can watch the video here. Starting at the 3:50 mark, you can watch Williams tell David Letterman this fabricated story. After the story, Letterman tells Williams how much respect he has for him and later refers to him as a “war hero.”

Brian Williams is no “war hero,” he is a dishonorable worm who should be fired because he lied to make himself look like one.