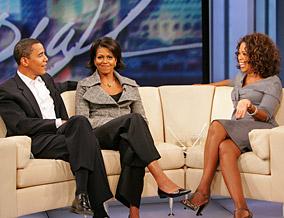 Apparently, Oprah is whining that Sarah Palin won't come on her show now that the election is over. But, who can blame Governor Palin for snubbing Oprah after the nasty things Oprah reportedly said about her before the election?

In an interview with TV tabloid schlocker Extra, Oprah acted all shocked that Palin has yet to agree to an "O" interview.

It might be remembered that back in September, Drudge reported that Oprah had been heard to say that she would never interview Sarah Palin. Not long after the Drudge flash, Oprah issued a press release where she denied the reports of the mean things she said about Palin. Oprah made some vague claim that she had "decided" not to open her show for political candidates despite the fact that she was an open participant in Barack Obama's campaign and had the now president elect and his wife on her show several times during the campaigns.

So, now Oprah is wide eyed with shock that Palin has snubbed her thus far?

Talk about clueless! Vacuity reigns supreme in Chicago, I guess.