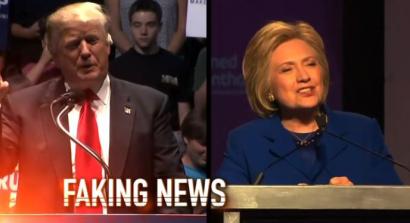 In the mid-1990s, when the great Norm Macdonald was kicking off his “Weekend Update” segments of Saturday Night Live with, “And now, the fake news,” pretty much everyone knew what he meant. These days, however, disputes over definitions of “fake news” seem as common as fake news itself.

During December, several leftist writers examined elements of the fake-news phenomenon. One decried the tendency of “right-wing nuts” to use the term to describe any reporting that rankles them. Another distinguished between good fake news and bad fake news and argued, unsurprisingly, that the good kind is purveyed by the likes of John Oliver and Samantha Bee.

It may be that the lefty writer angriest about fake news is media critic and political blogger Allison Hantschel, who in a Tuesday post at First Draft blamed the problem on both conservative media (for undermining the mainstream media) and the MSM (for not vigorously defending itself until it was too late). Hantschel called MSM bigwigs who’ve failed to take the issue seriously “DUMB MOTHERFUCKERS” (caps in original) and declared, “For 20 fucking years, or however long [Rush Limbaugh] and his mini-me’s have been bloviating on the air and accruing listeners, people…have been saying this is bad, this is creating a culture of distrust for the truth and a willingness to disregard the facts.”

Hantschel vented on: “Those people, who were concerned about stopping this when it could be stopped, who watched talk radio poison the wells of every small town in America…[they] were ignored, shunted to the side, told they were hysterical and that they couldn’t take a joke…And NOW you assholes see a problem…NOW you want us to deplore the cheapening of the public discourse, the speed at which information spreads. Now. After two, three decades of screaming from every screen in existence. After we’re all so beaten down by this that a literal white supremacist doesn’t surprise us. NOW it’s a national emergency.”

Even the MSM’s newfound concern about fake news has more to do with money than with journalism:

It couldn’t be because this is all happening on the internet, and is beginning to cut into your bottom line, could it? That couldn’t be why you’re finally willing to take this milquetoastiest of stands. [From a New York Times article:]

The right’s labeling of “fake news” evokes one of the most successful efforts by conservatives to reorient how Americans think about news media objectivity: the move by Fox News to brand its conservative-slanted coverage as “fair and balanced.”

WHICH IS WHAT PEOPLE HAVE BEEN TRYING TO TELL YOU GODDAMN IT YOU FUCKING HAMSTERHEADS. Fox News went on the air in 1996. You want to talk about this NOW?...

I can’t imagine where conservatives got the idea that the news was manipulable.