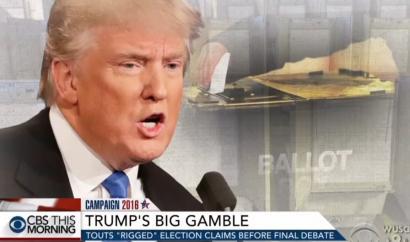 If there’s ever a Donald Trump-centric TV channel, it’s likely that not all of its big names would be from the populist right, hinted What Liberal Media? author Eric Alterman in his column for the November 14 issue of The Nation.

In his discussion of prominent media “enable[rs]” of the “catastrophe” that’s been Trump’s campaign, Alterman unsurprisingly judged Rupert Murdoch “first and foremost” among them and, also unsurprisingly, trashed CNN president Jeff Zucker, who allegedly “disgraced CNN by constantly running Trump phone calls and rallies as if the ‘C’ stood for ‘Cheerleader.’”

But regarding potential on-air personalities for a Trump channel, Alterman mentioned MSNBC’s Joe Scarborough, who “has made some of the most egregious pro-Trump arguments heard anywhere during this election cycle. He defended Trump’s joking assassination encouragements to gun nuts. ‘Hillary Clinton has had people around her with guns wherever she went since 1978. Since 1978!’ he said early in the campaign. More recently, as Trump began undermining the democratic process by keeping the country ‘in suspense’ about whether he will accept the election results, Scarborough shrugged off the alarm. ‘It’s just another example of the media having to find a little phrase and freak out.’”

Another wanna-be Trump “bromancer,” sniped Alterman, is Bloomberg’s Mark Halperin: “The famous inside-baseballer has bathed himself repeatedly in Trump’s orange glow, posting romantic-style selfies with the nominee from his helicopter and defending his racist arguments about Mexicans and guns, among many other outrages. Halperin admits aloud that he idolizes Trump as ‘one of the two most talented presidential candidates any of us have covered…in terms of pure political skill’—the first being Bill Clinton. And after the third debate, he described Trump’s egregious democracy-threatening comments as something that only ‘offends the sensibilities of elites.’”

Alterman indicated that even an enterprise built on straight-up racism nonetheless shouldn’t have a problem attracting talent (bolding added):

It will be interesting to see how many of the above “journalists” seek to cash in postelection with Trump’s soon-to-be media empire. [Trump’s son-in-law Jared] Kushner has already held meetings with investment bankers who presumably would put up the cash for what would likely be a white-nationalist news network, ready to embrace conspiracy theory after conspiracy theory pushed by neo-Nazis and other right-wing hate groups. As with Fox and Breitbart, a Trump-owned network would have the effect of pushing the 50-yard line of American discourse into a make-believe land where the president is illegitimate, science is a fantasy, and race and religion are dividing lines between “real Americans” and potential traitors. One thing’s for sure: There will be plenty of people willing if the price is right.