Ex-Newsweek Pundit: Hillary’s ‘Been Lied About More Than Anyone in American Public Life in the Last 25 Years’ 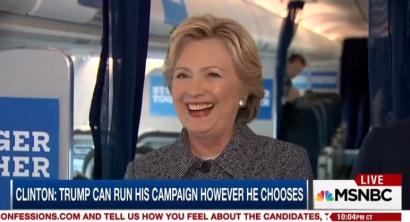 As a rule, liberals think that most criticism of Hillary Clinton is invalid. The Daily Beast’s Michael Tomasky has dared to put a number on “most.” In a Tuesday column, Tomasky wrote, “I’d say that around 80 percent of what you’ve read about [Hillary] over the years is simply false. It didn’t happen the way it was presented, or a lot of the time it didn’t happen at all. And she has long since even stopped trying to correct the record in many cases, figuring it’s just no use.”

The former Newsweek journalist traced the over-the-top attacks on Hillary to the period when Bill Clinton was vying for the 1992 Democratic presidential nomination: “She was a feminist, which she didn’t bother to deny. In addition, for years she had been the chief breadwinner in the Clinton household. The governor of Arkansas made $30,000, maybe $35,000 in the ’80s. Hillary, a partner in Little Rock’s prestige law firm, made six figures. And she was seen, then, as ‘secretly’ more liberal than her centrist husband…It is because Hillary so fully defied social conventions that her conservative antagonists decided they needed to persuade America that she was a terrible person. This began with attacks that…she was a dangerous radical.”

When the right’s portrait of Hillary the staunch leftist failed to sell, Tomasky alleged that Plan B “was to paint her as corrupt, since concern about corruption transcends ideological and partisan lines…In 1992-93, some factors came together to make it surprisingly easy. Right-wing talk radio had recently exploded across the country. The 24-7 news cycle was just becoming a thing. There was a lot of airtime to fill.”

Tomasky conceded that Hillary has occasionally messed up: “Her email server decision was indefensible…She did embellish that Bosnian sniper-fire story, twice, back in 2008. The decision to accept a fat speaking fee from Goldman Sachs is incomprehensible to me. Both Clintons’ pursuit of money in recent years has been grossly excessive.” Ultimately, though, there’s not much there (bolding added):

Counting Benghazi and the emails and Whitewater and Filegate and everything else, she’s easily been investigated by upwards of 20 official bodies. Some very skilled investigators, and certainly many who wanted to corner her. If she’d really done something unlawful or deeply unethical, don’t you think one of these investigations would have found the goods?

In the right-wing swamps, they have an explanation for this as they do for everything—it’s a liberal conspiracy, or she’s had critics killed, or whatever. But here on Planet Earth, maybe there’s another explanation, which is that the vast majority of stuff she’s been accused of, she simply didn’t do…

…Clinton has made her mistakes; a few big ones. But she’s been lied about more than anyone in American public life in the last 25 years, even more now than her husband.