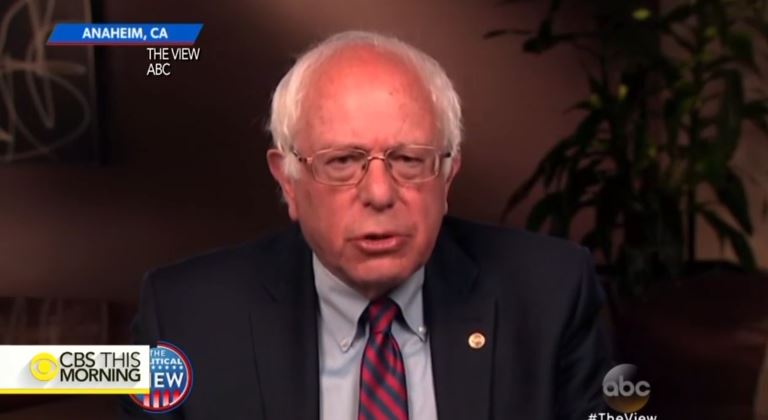 It’s the night of November 2, 2032. Earlier that day, voters chose a democratic socialist as the next president of the United States. At the victory celebration, the crowd goes wild for the president- and vice president-elect, and for a beaming 91-year-old man without whom this triumph wouldn’t have been possible. His name is Bernie Sanders.

NewsBusters readers would consider that a nightmare scenario. For The Washington Monthly’s D.R. Tucker, however, it’s something he’d like to see realized.

In a Sunday post, Tucker urged Bern-feelers to follow the example of conservatives who “rebounded from Barry Goldwater’s spectacular [1964] loss [and became] a dominant force. By forming influential think tanks and media outlets, pressuring the mainstream press to focus on issues right-wingers considered important, and voting consistently in even the most ‘minor’ of elections, the right seized power…Barry Goldwater was not the man to lead a conservative revolution, but he unquestionably inspired one. Perhaps [Sanders’s] supporters could pick up where his campaign left off and lead a revolutionary effort to move this country to the left.”

As Tucker indicated, to help make all this come true left-wingers will need a stepped-up media presence, including “an anti-Fox” (apparently MSNBC doesn’t qualify):

It was gratifying to see Sanders supporters proclaim “Media bias!” in response to the June 6 decision  by the Associated Press to declare Clinton the presumptive Democratic nominee…Hopefully, Sanders supporters now fully grasp that a Sanders-style candidate always will run into headwinds if there is not a dramatic expansion of America’s progressive media infrastructure. I’m not sure how many of these Sanders supporters stood up for Air America Radio or Current TV back in the day, but if they now regard the “establishment media” as having screwed Sanders, they will add their voice to Sanders’s call for the Democratic Party to finance an anti-Fox (and, presumably, other television and radio entities that will expand the progressive media footprint in this country). If some Sanders supporters are reluctant to have the Democratic Party finance progressive television and radio, they’ll have to figure out a way to encourage progressives with significant financial resources to do the same; one can’t run a television or radio network on a GoFundMe campaign.

As for who might be the face of such a TV network, well, who knows, but please note that in late March, Keith Olbermann said he was “coming out of retirement.”