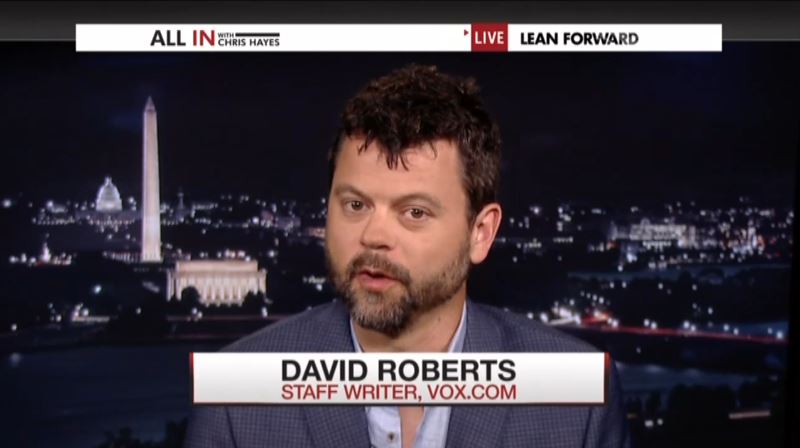 Last week, ex-Bill Clinton adviser Paul Begala snarked on CNN that during the most recent Republican presidential debate, the candidates mentioned Hillary Clinton so often that they came off as “creepy…in a stalker sort of way…Maybe it's affectionate…Maybe they’re like junior high schoolboys.”

Vox writer David Roberts has joined Begala in likening the GOP contenders to middle- or high-schoolers, but his concern is aggression, not affection. In a Monday series of sixteen tweets later collated and posted on the magazine’s site, Roberts argued that when the candidates talk about how they’d deal with ISIS, they sound like “insecure, hormone-ridden teenage boy[s]” and “status-obsessed, chest-beating adolescents.”

Roberts also claimed that when it comes to foreign policy, conservatives prize drama and stagecraft, not reason or results: “They condemn Obama’s aversion to force even though O been bombing ISIS for months. Why? Because he’s not making them *feel* it…It’s not the actual bombing they want, it’s the martial rhetoric, the flag-filled chyrons, the Bush-with-a-megaphone feeling.”

Below are Roberts’s tweets (bolding added; typos not cleaned up):

1. Struck again by how cons approach foreign policy almost *entirely* based on what feels emotionally satisfactory.

2. Not only do they neglect empirical analysis of what has happened & what might happen, but they condemn such analysis as weakness.

4. They condemn Obama’s aversion to force even though O been bombing ISIS for months. Why? Because he’s not making them *feel* it.

5. It’s not the actual bombing they want, it’s the martial rhetoric, the flag-filled chyrons, the Bush-with-a-megaphone feeling.

6. They want him to say the right words, to call enemies the right names, to beat his chest, to show that America es mas macho

7. Whether war - the last one, the next one - "works" is neither hear nor there. It’s working if it’s making them *feel* the right way.

8. It is foreign policy as carried out by an insecure, hormone-ridden teenage boy; everything’s about who burned who, who came out on top.

9. The fact is, there’s no clean, emotionally satisfying resolution to the problem of stateless terrorism.

10. You can contain it, minimize the damage, try to draw countries toward better development & more freedom to reduce it’s attraction.

11. But there will never be a grand victory, no dreamy hero flying onto an aircraft carrier in a flightsuit to declare Mission Accomplished.

12. It’s never going to be emotionally satisfying. Grown-ups know that. It’s the world. It’s complicated. Even US power is limited.

13. Meanwhile, it is terrifying that 1 of these status-obsessed, chest-beating adolescents might actually take the reins of the US military.

15. Anyway, this has all been obvious for years (Bush should have made the case conclusively), but it’s never been more clearly on display.

16. And as usual, I have a sinking feeling it isn’t going to end well. #fin

A year ago, Roberts, then with the environmentalist magazine Grist, tweeted a series of thirty-six thoughts about modern conservatism. His main argument was that “nihilistic” right-wingers had undermined the idea of objective reality because they wanted “every dispute, even over matters of fact, [to] become…a contest of power — loudest, best funded, most persistent voices win.”