The Arizona Supreme Court ruled unanimously Monday that illegal immigrants protected from deportation under former President Barack Obama's Deferred Action for Childhood Arrivals program are not eligible for in-state tuition rates at state universities and community colleges. Press coverage is glossing over the fact that the state's educational establishment unilaterally took obviously illegal actions to institute this practice, directly defying a 2006 measure approved by 71 percent of the state's voters.

I have found no media report recognizing that Monday's decision, as Arizona Attorney General Mark Brnovich explained in his related press release, is the second straight unanimous court decision. The Arizona Court of Appeals ruled identically 3-0 in June 2017.

Brnovich's release also notes how overwhelmingly Arizona's voters spoke on this matter 12 years ago, something the Associated Press's related stories (here and here) failed to do:

In 2006, Arizona voters approved Proposition 300 with 71.4% of the vote. The law provides that state-funded services and benefits, including in-state tuition and financial aid, can only be provided to individuals who have legal status. 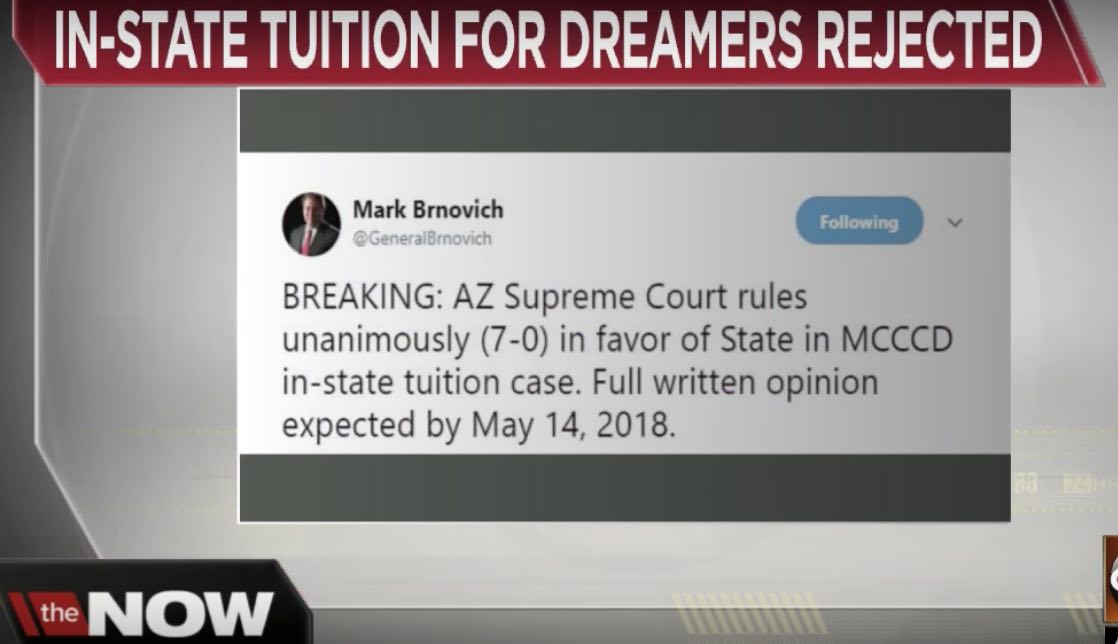 Coverage of the decision at the Arizona Republic notes that the law "specifically includes in-state tuition as a public benefit only for people with legal status," but called that detail a mere "wrinkle in the argument over lawful presence."

The idea that DACA confers "lawful presence" was concocted by an activist "trial judge" — not a "lower court," as the AP's reports contended — as seen in a June 2017 Capitol Media Services dispatch covering the Appeals Court's ruling:

“Dreamers” are not in this country legally and not entitled to reduced tuition available to in-state students, the Arizona Court of Appeals ruled Tuesday. ("Dreamers" is the emotional euphemism often incorrectly employed, as in this instance, when the correct term is "DACA recipients." — Ed.)

In a unanimous decision, the judges rejected the arguments by attorneys for the Maricopa County Community College District that their legal status under the federal Deferred Action for Childhood Arrivals program means the federal government considers them to be legally present in the country.

In 2016, after a trial judge sided with the colleges, the Arizona Board of Regents changed its policy and also offers in-state tuition to DACA recipients who meet other residency requirements.

The press has also predictably failed to note that the Obama administration's Department of Homeland Security hoped to use vagueness to create access to state-based privileges ordinarily only available to genuine citizens in the wake of the President's June 2012 DACA policy announcement, as reported in January 2013 at Numbers USA):

Although this DHS gambit didn't work with Arizona's in-state tuition breaks, DACA recipients gained the ability to obtain driver's licenses in Arizona in 2014 — a "right" which withstood a final U.S. Supreme Court challenge in mid-March.

Somehow, Obama's HHS arbitrarily decided in August 2012 that DACA recipients are not lawfully present, and therefore "are not eligible for ObamaCare ..."