The substance of Newsweek's clickbait headline predictably failed to survive the content's opening (link is to original version, before a major correction discussed later):

So now they only "helped derail ... Franken," even though Newsweek gave the cyber tricksters full headlined credit.

... the initial accusation against Franken by Hooters pinup girl and lad-mag model Leeann Tweeden was turned into effective propaganda after first being hinted at by right wing black ops master Roger Stone.

It takes a special brand of gall for someone who, concerning then-President Bill Clinton in 1998, wrote that "I'd be happy to give him [oral sex] just to thank him for keeping abortion legal," to disparage another woman as the equivalent of trailer trash.

Burleigh's haughty attitude towards others deemed beneath her is consistent with another two-decades-old passage:

There was a time when the hormones of indignant feminism raged in my veins. An open gaze like that, at least from a man of lesser stature, would have annoyed me. But that evening, I had the opposite reaction.

Burleigh's Newsweek blather contends that "Tweeden’s account of being groped by Franken was first amplified by a network of right wing media" on November 15. 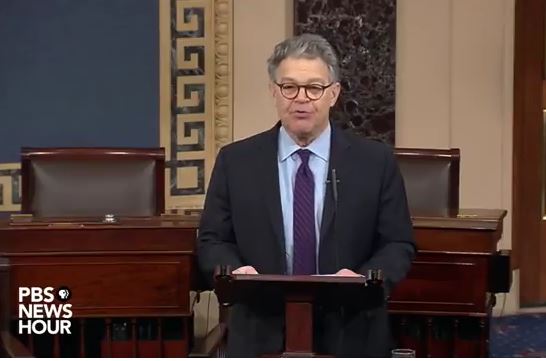 The first substantive airing was by Tweeden herself on KABC in Los Angeles. The revelation by a victim (the first of at least eight), not the actions of Japanese websites, bots, and rumormongers, is what generated the subsequent media firestorm.

In her original account of what caused Democrats to call for Franken's resignation, Burleigh erroneously claimed:

On December 7, just before Democrats started calling for Franken to step down, the freshly minted Japan-based fake sites went to work ...

One problem, which Newsweek  was forced to admit, while failing to call it a correction: Democrats demanded Franken's resignation on December 6, meaning that those "freshly minted Japan-based fake sites" had no impact on the Minnesota Senator's colleagues.

Sore loser Burleigh also lamented that "the 2016 election ... (was) arguably lost due to the right's superior utilization of darker online strategies."

Really, Nina? Then what were the Democrat-financed, online-orchestrated protests at Donald Trump campaign rallies by provocateurs intent on fomenting retaliatory violence?

Burleigh's effort desperately attempts to distract from the obvious truth: Al Franken's own actions, and his reactions once exposed, ended his Senate career.