In a Wednesday "analysis" piece anticipating the tax bill's passage, Andrew Taylor at the Associated Press, apparently bitter at the impending outcome, framed that successful effort as a betrayal of the "GOP's tea party promises."

Apparently, the AP reporter has forgotten what the T-E-A in "tea party" stands for.

The Tea Party movement, in regard to the federal government, has always had three primary goals, summarized in six words: Reduce spending. Reduce taxes. Limited government.

The need to reduce taxes has been a key element of the movement since its earliest days, as seen in the following paragraph from July 2009 (bolds are mine throughout this post): 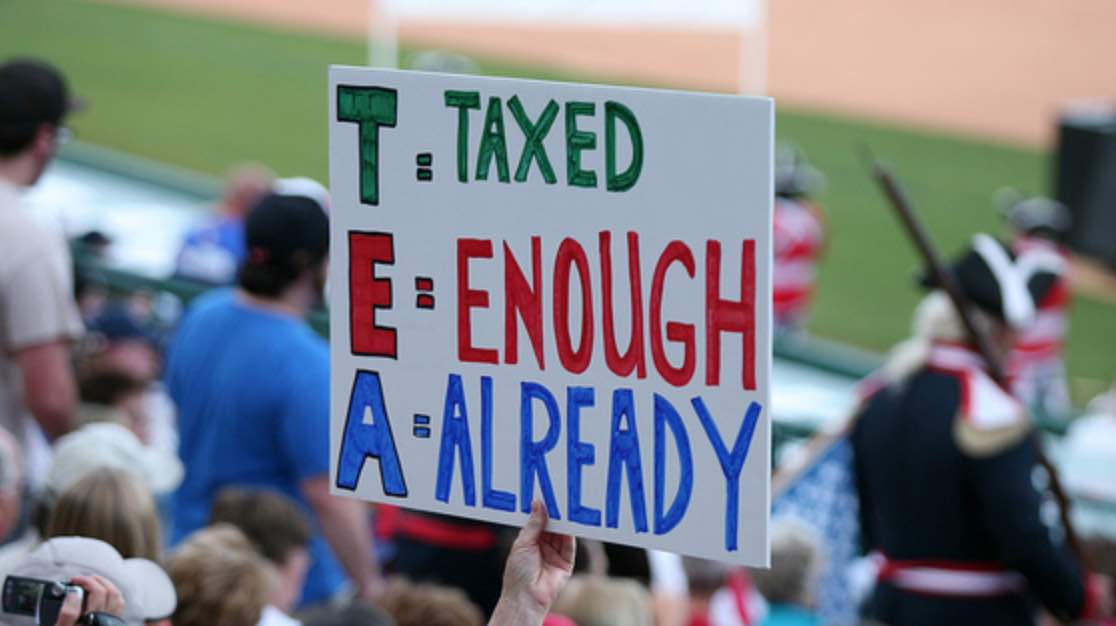 From the East to West Coasts and in the heartland in between, and to the wilds of Alaska, the Tea Party tax protests are enthusiastically continuing. Over the July 4 holiday, TEA (Taxed Enough Already?) Party rallies are already planned in 1,267 cities and towns across the nation, and the list grows longer as more volunteers who feel they have been taxed enough join the effort.

The tea party class of 2010 vowed to usher in a new era for the Republican Party, one where conservatives clamoring for fiscal discipline would roll back government spending to rein in trillion-plus budget deficits.

The "tea party class of 2010" ran on the tea party principles listed above. "Fiscal discipline" isn't just cutting spending to the point where the budget balances. It's reducing the size, scope, and intrusiveness of government, particularly the federal government, which inevitably involves reducing its collections stream.

Taylor then proceeded to mischaracterize the history of the Reagan era, and the new law:

Republicans are returning to their Ronald Reagan-era roots — tax cuts first, followed by vague promises of cutting spending down the road. Concerns about growing budget deficits have been shelved as Republicans controlling Washington focus instead on delivering tax breaks along with spending increases for the military.

Taylor expects readers not to know that Democrats controlled the House of Representative during the entire Reagan era. He also somehow forgot that the "vague promises of cutting spending down the road" occurred in connection with 1982 legislation which increased taxes, as Ronald Reagan's son Michael recalled in 2012 (italics added by me):

It happened to my father early in his first term when he sought to close a growing federal deficit caused by the deep economic recession. He believed Democrats in Congress would keep their pledge to make $3 in future spending cuts for every $1 in immediate tax increases.

In 1982 he signed a compromise tax bill with the horrible name of TEFRA — the Tax Equity and Fiscal Responsibility Act. And, when those promised spending cuts never materialized in Congress, TEFRA became one of the biggest regrets of my father’s presidency.

Despite all of this, "As Reagan left office, CBO (the Congressional Budget Office) projected that 'deficits were on a path to fall to about 1 percent of GDP' by 1993."

As to the second claim in Taylor's just-excerpted paragraph: Yes, the Trump administration and Congress want to increase military spending, because military preparedness went downhill terribly during the Obama era. But the AP reporter's claim that Republicans had a "focus" on "tax breaks" in the tax bill is sheer fantasy. The bill lowers corporate and individual tax rates across the board. There's very little in the way of targeted "tax breaks" benefitting particular individuals, industries, or cronies. As many have already noted, analysts on the left and right agree that the vast majority of Americans will get a tax cut.

Taylor later demonstrated that he has a double standard on deficits, depending on the party of the presidential administration which incurs them:

The budget deficit, which registered $666 billion in the 2017 budget year, is set to soar even higher, fueled by the tax cuts, a disaster relief total set to breach $130 billion, and long-promised, record budget increases for the military. Trillion-dollar deficits loom before the end of Trump’s term, which has Republicans already planning a pivot to long-promised curbs on government benefit programs such as food stamps, Medicaid and Medicare.

In mid-October 2016, when all the smart money was on a Hillary Clinton presidential election victory, Taylor described the fiscal 2016 deficit of $587 billion as "a level many economists say is bearable," and quoted a left-leaning economist who claimed, "It's totally manageable." Now a $666 billion deficit is absolutely awful, and what's worse, it's supposedly going to "soar higher," i.e., the current level, which is not much higher than what was "totally manageable" in October 2016, is considered "high" in December 2017.

Additionally, "trillion-dollar deficits loomed" in 5 of the 10 years in both of the Congressional Budget Office's 10-year projections (August 2016 and January 2017) released before Donald Trump entered office. The projected deficits under Trump are products of static analysis, which naively assumes that there will be no change in economy's trajectory if the people are allowed to keep more of their money. History says otherwise.

In a slightly earlier paragraph, Taylor attempted a pre-emptive victory dance at the tea party's expense:

For now, the clear winners are the individuals soon to pocket tax cuts, along with corporations and businesses that stand to reap a windfall. The potential losers are the people who rely on the social safety net. But if Republicans fail, again, in their promises to wrestle the budget under control, the joke will be on the tea party base that thought it was voting for fiscal conservatism.

Any doubts that Andrew Taylor is bitter should be erased with that last especially unprofessional highlighted sentence.

As noted earlier, the tax cut is in sync with one of the tea party's three primary goals. If spending restraint doesn't materialize, that will be a separate disappointment which does not mitigate the tax-cut success achieved this week. More bluntly, the "joke" is not and will not be on the tea party base, because that base is happy and will remain happy with this week's result, and is disgusted with the opposition, as seen at a graphic found at a tea party group's website:

As noted, even without spending restraint, Reagan got the federal budget close to balancing. After the Bush tax cuts, the federal budget deficit, following the last budget enacted by a Republican-led Congress in 2006, came in at just 1.1 percent of gross domestic product in fiscal 2007 ($163 billion deficit in a $14.48 trillion then-current dollar economy). In each case, the near-balances occurred because actual tax collections far exceeded the CBO's forecasts, because the American people who were able to keep more of their own money generated more economic activity than the agency predicted.

I should also note, because Taylor didn't, that the Trump administration has had significant success to date in getting rid of job-killing regulations. This effort can be simultaneously seen as a spending cut if it means fewer bureaucrats, e.g., the over 700 employees who have left the EPA (if they're not replaced); as having the same impact as a tax cut if businesses end up spending less on regulatory compliance; and as a boon to capital investment, e.g., companies like Comcast announcing gigantic capital spending plans as a result of the FCC's withdrawal of Obama-era "net neutrality" regulations.