In May, the establishment press went into overdrive after learning that Attorney General Jeff Sessions didn't disclose two 2016 contacts with Russian ambassador Sergey Kislyak on his disclosure forms applying for security clearance.

On Monday, based on "a newly released document," the network reported that Sessions was accurately told that the disclosures weren't required, because those meetings were connected with his Senate duties. In other words, seven months later, the network finally said: "Oops. Never mind."

CNN's original report in May already effectively admitted that it was on shaky ground when it added the following to its original dispatch: 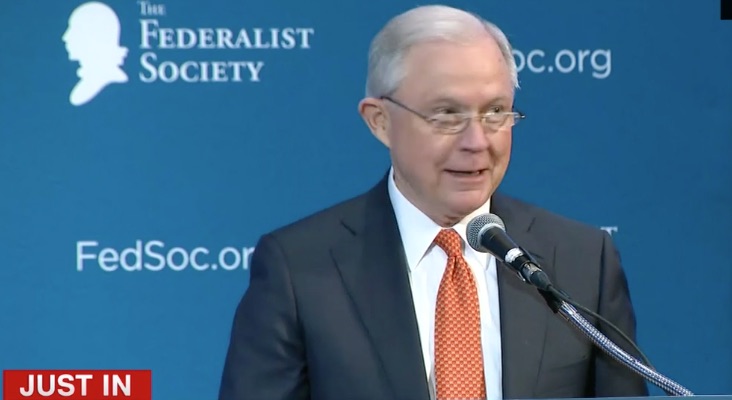 After CNN's story (was) published, a spokesman responded to the reporting with a statement, saying that Sessions was instructed not to list meetings like the ones with Kislyak on his form.

"As a United States Senator, the Attorney General met hundreds -- if not thousands -- of foreign dignitaries and their staff," spokesman Ian Prior said. "In filling out the SF-86 form, the Attorney General's staff consulted with those familiar with the process, as well as the FBI investigator handling the background check, and was instructed not to list meetings with foreign dignitaries and their staff connected with his Senate activities."

Now let's look at who CNN relied on for expertise back in May:

A legal expert who regularly assists officials in filling out the form disagrees with the Justice Department's explanation, suggesting that Sessions should have disclosed the meetings.

"My interpretation is that a member of Congress would still have to reveal the appropriate foreign government contacts notwithstanding it was on official business," said Mark Zaid, a Washington attorney who specializes in national security law.

Zaid added that in a similar circumstance he advised a member of Congress to list all foreign contacts -- including those made during official US government business.

It will surprise very few readers used to the establishment media's machinations that Zaid has contributed thousands of dollars to the Montgomery County, Maryland Democratic Party Central Committee.

The final nail in the security clearance controversy coffin was reported by Fox News on Friday. Evan Perez's CNN story did not acknowledge that Fox beat them to the story:

A newly released document shows that the FBI told an aide to Attorney General Jeff Sessions that Sessions wasn't required to disclose foreign contacts that occurred in the course of carrying out his government duties when he was a senator.

The FBI email from March bolsters the explanation by the Justice Department for why Sessions didn't disclose contacts with the Russian ambassador in his application for a US security clearance. When the omission of the foreign contacts on the form was first reported by CNN in May, the Justice Department said Sessions' office was advised by the FBI that he didn't need to disclose the meetings.

An FBI agent, whose name isn't made public in the document released by the bureau, was responding in March to a query from Sessions' assistant. The assistant sought confirmation of what she said was an earlier conversation on the matter. At the time, news of Sessions' Russian contacts had recently become public and prompted fierce political criticism.

The agent didn't recall the earlier conversation but affirmed that "he was not required to list foreign government contacts while in official government business unless he developed personal relationships from such contacts."

This huge "never mind" should also lead to a wholesale change in the narrative surrounding Sessions' January confirmation hearing and his decision to recuse himself from Russia-2016 election investigations.

Two of Sessions' responses to relevant questions asked during that hearing appear below.

The first is from Democratic Senator Patrick Leahy, who asked a simple question, and got a simple answer (see Page 26 at link):

The other answer was in response to a rambling question from Democratic Senator Al Franken. Franken referred to a January 11 CNN report alleging that "There was a continuing exchange of information during the campaign between Trump’s surrogates and intermediaries for the Russian government," and asked:

In March, CNN and other press outlets reported that Sessions didn't mention two contacts during 2016 with Russian ambassador Kislyak, neither of which had anything to do with his role as a "Trump surrogate" during the presidential campaign. Largely due to ginned-up media and Democratic Party pressure as a result of those alleged "omissions," Sessions recused himself from investigations into alleged 2016 presidential election Russian interference.

It's not unreasonable to contend that Sessions made a big mistake by letting the left and the establishment press intimidate him into recusing himself, when their published claims ended up, yet again, being fake news. Perhaps the Attorney General should consider changing his mind.