April Ryan, an inexplicably esteemed member of the White House press corps, having tried and failed to promote a "fake news" controversy over White House's Press Secretary Sarah Sanders' Thanksgiving pecan pie, has not apologized or acknowledged her error, has rejected Sanders' face-saving attempt to smooth things over, and is apparently worried that Sanders will publicly poison her and her fellow journalists. You can't make this stuff up.

Ryan's history, as documented at NewsBusters, is full of embarrassing statements, unhinged rants, and stunning ignorance of very basic facts.

The pie saga began when Sanders posted a photo Thursday afternoon of the pecan pie she baked for Thanksgiving. Here is her 2:40 p.m. tweet and the top half of the pie:

Just before noon on Friday, April Ryan tweeted that Sanders needed to "show it (the pie) to us on a table," and further demanded that she needed to see "folks eating it and a pic of you cooking it." Apparently sensing some kind of victory, she arrogantly added that she was "getting the biggest laugh out of this":

The joke is on April Ryan.

It apparently didn't occur to her that the pie was not a table decoration, but was instead baked for human consumption. In other words, the "cooking" and the act of grateful meal participants "eating it" took place the previous day.

At 4:10 p.m. on Friday, the New York Daily News posted an item with a false headline claiming that "No one believes that Sarah Huckabee Sanders baked this pie." The content — "many seem to think that she didn't cook on Thursday either" — contradicted the headline.

The Piegate-supporting tweets included in the NYDN story included one claiming that Sanders had posted an image which was "stolen from PBS." Sensing a victory, one Tweeter piled on: "The fact that this is stolen from @PBS, a channel you'd cheerfully defund, just makes this all the sadder."

This is where Piegate began to unravel.

It turns out that the opening portion of the "PBS" web page location (https://pbs.twimg.com/media/) applies to "all tweet images" stored at Twitter. The full URL for Sanders' pie pic (https://pbs.twimg.com/media/DPV1z_4VQAAg9qa.jpg:large) locates the photo within Twitter. Those berating Sanders for stealing from PBS were obviously hardest hit. (One reporter had the integrity to pull her related tweet and genuinely apologize for her "error" Friday evening. Sadly, she appears to be a rare exception.)

Early Friday evening, the Daily Caller's Alex Pfeiffer reported that "A reverse image search (an attempt to find an earlier photo posting than Sanders') did not find any other pictures of the pecan pie that Sanders posted."

Saturday evening, Kurtis Lee at the ever-opportunistic, Trump-despising Los Angeles Times went so far as to claim that "#piegate is the latest example of the Trump administration's credibility being called into question." Despite evidence which by that time had been available for almost 24 hours that Sanders' photo constituted the first appearance of the pie in question, Lee insisted that "only White House Press Secretary Sarah Huckabee Sanders can answer" whether she baked the pie or not.

Lee missed the fact that Sarah Sanders had answered that question earlier Saturday, telling Fox News's Todd Starnes, "Of course I made the pie. I make it for every holiday family gathering and have for years." Starnes also added that "it is considered ill-mannered and uncouth to suggest a Southern woman would sully the sanctity of the Thanksgiving Day table with a store-bought pecan pie." 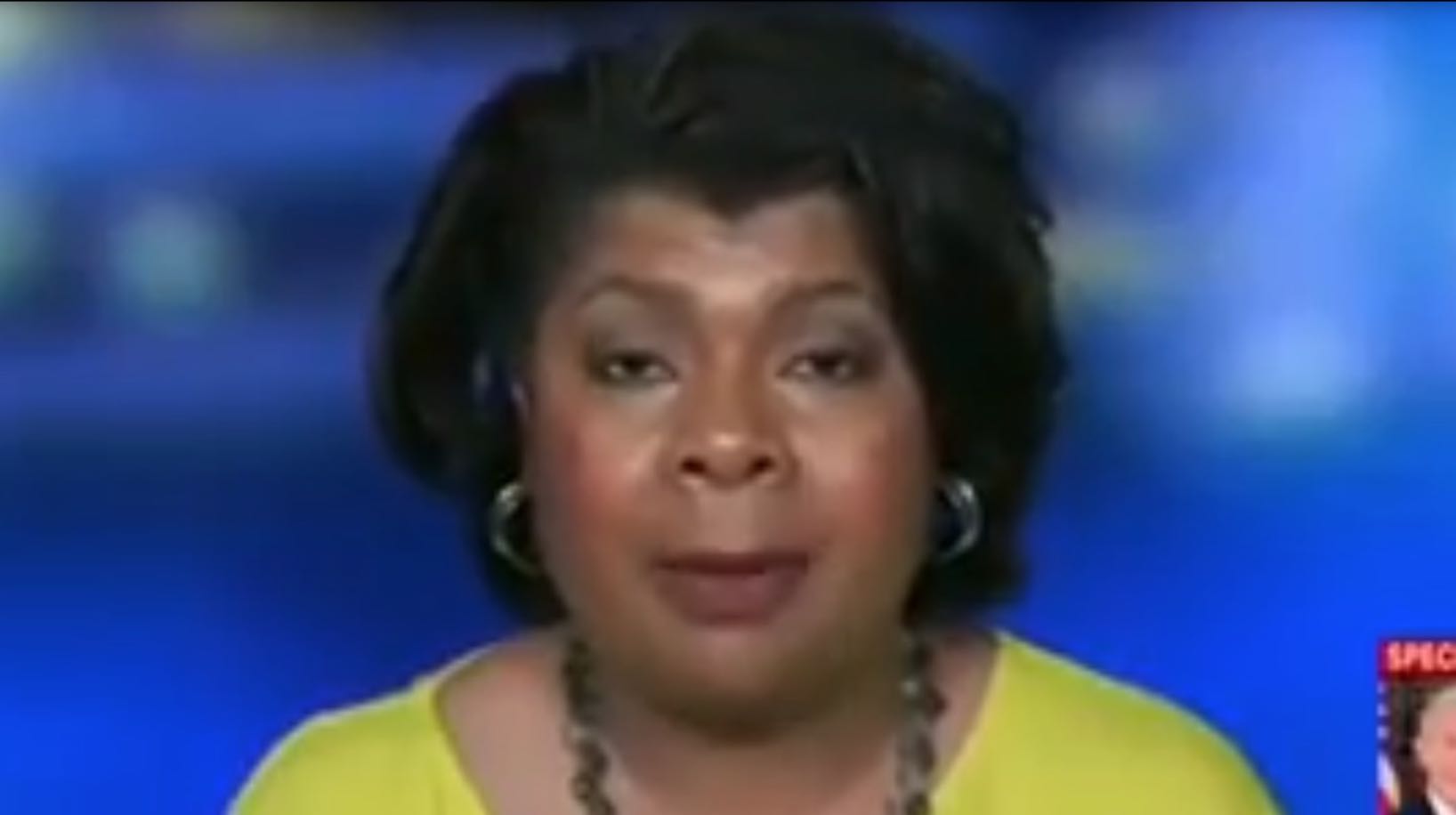 ... many partisans on the left, but also a journalist — wanted to see the pie in a more realistic setting.

The "journalist" to whom Lee referred was Ryan (pictured nearby earlier this year), who is obviously a "partisan on the left." He should have written, "many partisans on the left, including a journalist."

Getting back to the risible Ryan, Sanders promised to replicate her Thanksgiving pie-baking effort and bring it to Washington, tweeting: "Don’t worry @AprilDRyan because I’m nice I’ll bake one for you next week."

Friday evening, instead of accepting the Press Secretary's gracious offer as a way out of her now-clearly humiliating predicament, Ryan demanded eyewitness observation while getting paranoid and spiteful:

It would appear that April Ryan is afraid that Sarah Sanders will poison the White House press corps in front of the whole world.

April Ryan has demonstrated once again that she is a national embarrassment and a disgraceful role model for aspiring journalists. The National Association of Black Journalists, which named Ryan as their "Journalist of the Year" in May, should be but sadly aren't mortified at Ryan's bias, her ignorance, her gratuitous insults directed at those she doesn't like, her reflexive playing of the race card, and her utter lack of professionalism.