Hassett's strong response in the interview which followed showed that the decision to let Summers escape without debate spared the Keynesian Harvard economist from what would have been a humiliating experience.

Zakaria has been mischaracterizing the results of the Reagan and Bush 43 tax cuts for many years.

In January 2009, days before Bush 43 handed over the White House keys to Barack Obama, he claimed that the Bush 43 cuts were the "worst legacy" of the outgoing administration. That's pretty remarkable, given the left's rabid opposition the War on Iraq — which, by the way, was won roughly two months earlier.

During that 2009 show, Zakaria said the following (beginning at the 0:42 mark of the related video):

Remember the Bush tax cuts? Well, think about their effect on America.

In 2000, the Clinton administration had almost balanced the federal budget, and the non-partisan Congressional Budget Office was projecting that over the next 10 years, the United States would have surpluses that would add up to $5.6 trillion — yes, trillion.

Those CBO projections proved to be rubbish. Even left-leaning economists like Dean Baker have recognized that the bursting of the dot-com bubble, which was already well underway in 2000 during Bill Clinton's final year in office, caused a precipitous decline in wealth. This in turn led to a roughly $100 billion, 80% decline in annual capital gains tax collections by fiscal 2002 (roughly 5 percent of total receipts). It also led to a recession, which also negatively affected income and payroll tax collections during fiscal 2001 and 2002.

In other words, everyone who has studied the history knows that the trillions in projected surpluses were never going to materialize no matter who succeeded Bill Clinton as President. But Zakaria won't concede, simply because the narrative is too convenient. Calling the Bush 43 tax cuts "the most profoundly unconservative act of his presidency," he claimed that "Bush squandered it all."

That's wrong. From fiscal 2003 to 2007, total government receipts grew by 44 percent, because the Bush tax cuts genuinely stimulated business investment and economic activity. The annual deficit fell to $162 billion in fiscal 2007. That was the result of the last budget passed by a Republican-controlled Congress. Then the Democrats took over Congress. The lowest deficit recorded since fiscal 2007 has been an amount almost triple that figure in fiscal 2014.

On Sunday, Zakaria, while addressing Hassett also, brought up the Reagan  tax cuts, claiming that "If you look at what happened after the Reagan tax cuts, the national debt tripled. The tax cuts didn't cause that, because "Once the economy received an unambiguous tax cut in January 1983, income tax revenues climbed dramatically, increasing by more than 54 percent by 1989 (28 percent after adjusting for inflation)." The annual budget deficits and growth in the national debt during the Reagan era occurred primarily because spending cuts serially promised by Democrat-controlled Congresses never materialized. 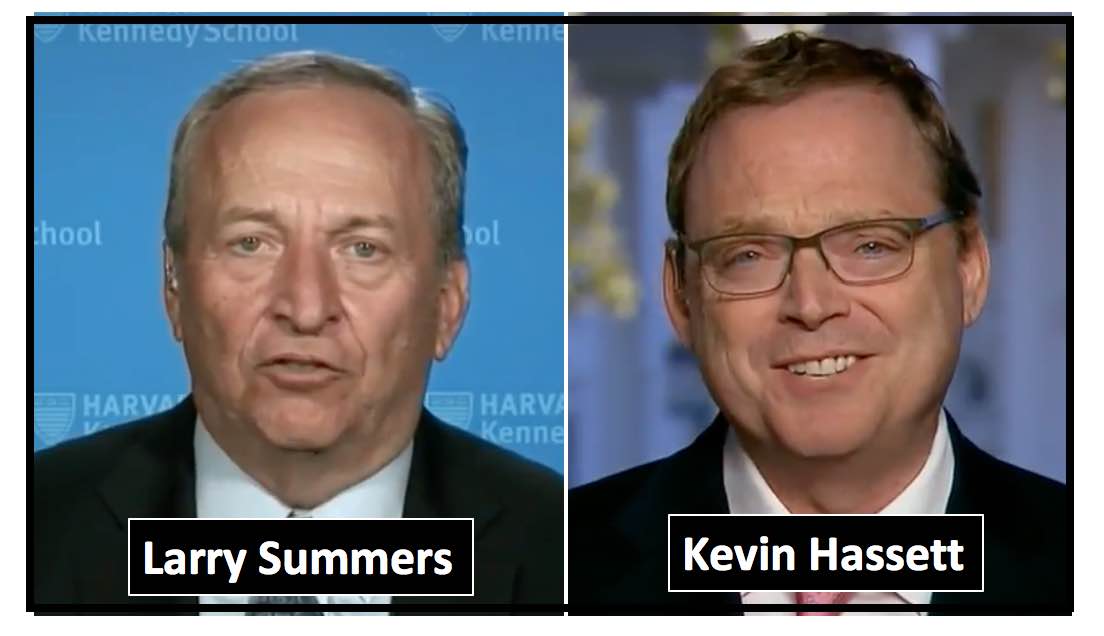 But first, Zakaria interviewed Summers. The host started by noting that Summers wrote in a recent Washington Post op-ed that he, Zakaria's words, has "never come across an analysis that you described as dishonest in the way that this is dishonest." At the 2:13 mark in the video of that segment below, Summers sharply criticized the Hassett's assumptions:

Actually, they're forecasts, and Larry Summers knows that. We won't know if they're "facts" until they do or don't happen.

This is a guy who worked for and then supported an administration which predicted that its stimulus package, if passed, would cause the most recent recession's unemployment rate to peak at 9 percent and fall to just over 5 percent by January of 2013. Unemployment actually peaked at 10 percent in late 2009, and was still at 8.0 percent in January 2013.

As to raising incomes, the results seen in that metric during the Obama era were the worst seen since the Great Depression of the 1930s:

If the current recovery were as strong as the average, the average U.S. family would have $17,000 more in annual income.

In that context, getting $4,000 to $9,000 of that shortfall back with the right policies — which clearly don't include the Keynesian bromides favored by Summers and leftist economists — doesn't seem unrealistic at all.

Egged on by Zakaria, Summers then went into prof-student condescension mode against Hassett (at the 4:41 mark in the above video):

FAREED ZAKARIA: You said that if Kevin Hassett had submitted his testimony or this proposal to you and he were a student at Harvard in an economics course you were teaching, you would have failed the paper. Do you stand by that?

LARRY SUMMERS: Yes, I do. I would have failed the paper because it was egregiously selective in the use of evidence, because it didn't defend the plausibility of its conclusions, because the methodologies were very far from the state-of-the-art methodologies in economics, and because professional economic analysis is supposed to be analytical and objective rather than constituting a political brief.

... What disappointed me about Kevin's work was not that I had never seen any document like that ... with the imprimatur of the Council of Economic Advisers.

The tactic was designed to make Summers look superior and more knowledgeable and to nullify the effectiveness of anything Hassett might say later.

It didn't work. What's most remarkable about Zakaria's subsequent interview with Hassett is that, unlike so many other Republicans and conservatives in similar situations, he pushed back hard against the personal attacks. He also backed up his positions with a slew of well-known and qualified outside endorsers, and, especially in his first response during the second minute of that segment, delivered it all with good cheer.

ZAKARIA: Before the break, you heard Former Treasury Secretary Larry Summers say why he thought the Council of Economic Advisers' analysis of its own tax plan is dishonest.

Well, joining me now from the White House lawn is the man responsible for that analysis, Kevin Hassett. Mr. Hassett is chair of the White House Council of Economic Advisers.

Thank you so much for joining us.

KEVIN HASSETT: It's great to be here, Fareed. Thanks for having me.

ZAKARIA: So, the heart of Larry Summers' contention is that the plan is dishonest because it claims that what amounts to about a $1,300 tax cut that is per worker or per household somehow gets magically translated into $4,000 or even more than that by the alchemy of your analysis.

What is wrong with his critique and why are you right?

HASSETT: Sure. Well, first of all, the tone of the critique is extremely incorrect. And the fact is, if you think that we did something wrong, then you should accuse us of making an error, but accusing us of being dishonest, it's just beyond the pale. It's not really becoming of a former Treasury Secretary.

But let's get past the ad hominem attacks and go to the substance. What Larry Summers did is he's like on his fifth attack now, and each one has been exposed as a horrendous ECON 101 blunder.

The first is this point that you raised, and the fact is that right now we have a corporate tax in the U.S. that has an enormous amount of dead weight loss because we have the highest corporate tax on Earth. It doesn't raise much revenue at all because the people are transfer-pricing their profits over to Ireland. It's something you've talked about a lot over the years.

And so right now we get almost no revenue because they create a job in Ireland to move the revenue there, increase the demand for labor there, drive wages up there instead of here.

And so this idea that you can compare the change in revenue to the change in wages has been exposed as a really critical blunder, Economics 101 blunder, by Greg Mankiw in his blog at Harvard, by John Cochrane at Hoover, by Casey Mulligan at the University of Chicago ...

Hassett came on so strong that Zakaria never regained the upper hand he surely thought he had going in.