AP, Media Show They Can Dish It Out But Can't Take It in Harvey-EPA Spat

As of late Sunday afternoon, the Associated Press's coverage of potential contamination resulting from Hurricane Irma in Florida, certainly a legitimate issue, was remarkably measured.

That dispatch's tone starkly contrasted with how the AP, without genuine basis, went after the U.S. EPA after Hurricane Harvey in Texas, and how childishly it reacted when the EPA pushed back hard against the wire service and reporter Michael Biesecker, who had not only filed a fake news story about Trump administration EPA head Scott Pruitt in late June, but who also appears to have a personal vendetta against Pruitt.

Here are the most relevant paragraphs from the AP's Sunday afternoon story by Tamara Lush and Jason Dearen (bolds are mine throughout this post):

... Toxic waste sites in the Tampa Bay region also pose risks to public health if they are flooded or damaged.

Florida has the nation's largest phosphorus mining industry, and it's based in the area. A byproduct of the industry is 27 hill-sized piles of waste containing low levels of radiation and other toxins, according to data from the U.S. Geological Survey. Some of the piles are 500 feet tall.

... The region is also home to more than half of Florida's 51 Superfund sites ... Many are old chemical or oil storage facilities that left behind a legacy of dangerous contamination in soil and groundwater. State and federal government agencies have been working to clean them up for decades.

EPA spokeswoman Amy Graham said in an email that "these facilities will be properly assessed to ensure there are no potential adverse impacts to human health and the environment."

Note that the AP included a comment from the U.S. EPA.

In earlier, unexcerpted text, the reporters also included a quote from a company which saw millions of gallons of its contaminated mine wastewater flow into the Floridan Aquifer last year after a sinkhole occurred. The company involved stated its belief that its "efforts to reinforce and strengthen the [sinkhole] seal in anticipation of the hurricane are proving effective."

This is not how the AP went about its business earlier this month in Texas, when it all but told its readers and subscribing outlets that the EPA was asleep at the switch in Harvey's aftermath.

The wire service's original September 2 report (since revised) did not include a comment from the EPA. But AP ambushers, I mean reporters, Dearen and Michael Biesecker went ahead and decided to accuse the EPA of negligence anyway, as they "breathlessly claimed: "Toxic waste Superfund sites near Houston flooded, EPA not on scene":

Floodwaters have inundated at least seven highly contaminated toxic waste sites near Houston, raising concerns that the pollution there might spread. 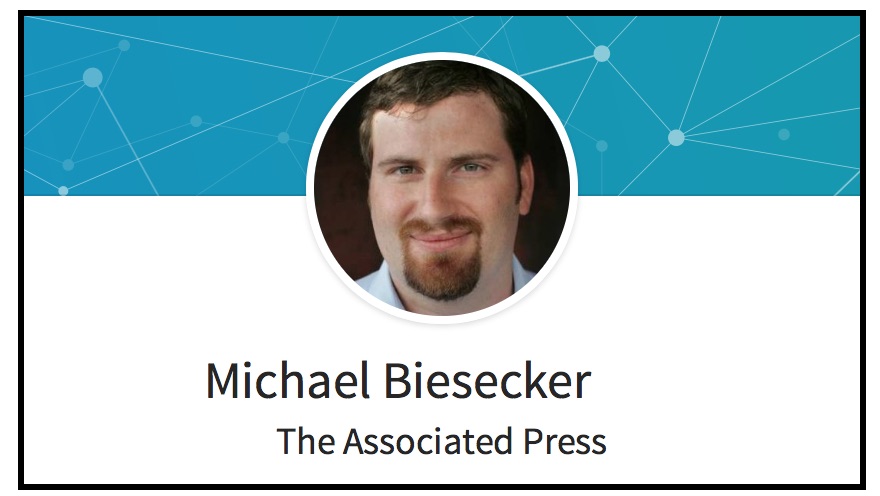 The Associated Press visited the sites this past week, some of them still only accessible by boat.

... On Saturday, hours after the AP published its first report, the EPA said it had reviewed aerial imagery confirming that 13 of the 41 Superfund sites in Texas were flooded by Harvey and were "experiencing possible damage" due to the storm.

The statement confirmed the AP's reporting that the EPA had not yet been able to physically visit the Houston-area sites, saying the sites had "not been accessible by response personnel."

Leaving aside the issue of how reporters can claim to have genuinely "visited" places that are fenced in with "No Trespassing" signs (as seen here), the AP reporters seem to have forgotten that aerial photography, conscientiously performed and reviewed, can often reveal quite a bit about an underwater contaminated site's condition and the degree of water pollution that may be occurring. It's also a lot less dangerous than sending officials out in motorboats in waters containing all sorts of items which might clog the engines or run them aground.

We should also recall that two years ago, the EPA was in the process of "cleaning up" a toxic site and made a "mistake" which turned the Animas River in Colorado and New Mexico bright orange with a million gallons of toxic waste. Poking around in a Superfund site which is currently flooded intuitively seems like a bad idea. If so, what's the point in having EPA officials take boats to these sites in dangerous conditions when high-resolution, zoom-in aerial photography is available?

On Sunday, September 3, the Trump administration's EPA struck back hard in a press release, in the process reminding AP that individual reporters living in glass houses shouldn't be throwing stones:

Yesterday, the Associated Press’ Michael Biesecker wrote an incredibly misleading story about toxic land sites that are under water.

Despite reporting from the comfort of Washington, Biesecker had the audacity to imply that agencies aren’t being responsive to the devastating effects of Hurricane Harvey. Not only is this inaccurate, but it creates panic and politicizes the hard work of first responders who are actually in the affected area.

Here’s the truth: through aerial imaging, EPA has already conducted initial assessments at 41 Superfund sites – 28 of those sites show no damage, and 13 have experienced flooding. This was left out of the original story, along with the fact that EPA and state agencies worked with responsible parties to secure Superfund sites before the hurricane hit. Leaving out this critical information is misleading.

Administrator Pruitt already visited Southeast Texas and is in constant contact with local, state and county officials. And EPA, has a team of experts imbedded with other local, state and federal authorities, on the ground responding to Harvey - none of which Biesecker included in his story.

Then the EPA got personal:

Unfortunately, the Associated Press’ Michael Biesecker has a history of not letting the facts get in the way of his story. Earlier this summer, he made-up a meeting that Administrator Pruitt had, and then deliberately discarded information that refuted his inaccurate story – ultimately prompting a nation-wide correction.

More background on Biesecker's made-up meeting is here. This was a major botch on Biesecker's part, and the AP's correction came off as blaming EPA more than its own sloppiness and poor follow-through.

The EPA is absolutely right in stating that Biesecker was perched in Washington for the Texas dispatch. The fact that Dearen and/or perhaps other AP photographers were "on the scene" questionably claiming to have made genuine "visits" doesn't change that fact.

Much of the press, including the Washington Post's Erik Wemple, took serious offense at the EPA's conduct after the AP's story appeared. But after Wemple recited a litany of the agency's experiences with Biesecker, I would suggest that objective observers would argue that the EPA's response was perfectly defensible.

In addition to the meeting that didn't happen described above:

After episodes such as these, why should anyone be surprised that, as Wemple reports, "the EPA pulled Biesecker from its master email list" while keeping dozens of other AP reporters on it? An even better question is how Biesecker has managed to avoid visible negative consequences to his career as a result of his conduct.

Wemple is offended, likely along with many of his colleagues in the press, that the EPA went after not only "a news outlet, but a specific reporter. With attitude too." He will only admit that the original AP headline noted earlier (later changed to "Toxic waste sites flooded in Houston area,” according to Wemple) "was a touch on the harsh side." No, Erik. It was bogus.

Of course, as CBS News has reported, "The AP is standing by its story and its reporters." Biesecker tweeted the AP's full response, but EPA Associate Administrator Lisa Bowman had the best take on all of this in the final paragraph of the agency's September 3 press release:

“Once again, in an attempt to mislead Americans, the Associated Press is cherry-picking facts, as EPA is monitoring Superfund sites around Houston and we have a team of experts on the ground working with our state and local counterparts responding to Hurricane Harvey. Anything to the contrary is yellow journalism.”

The Associated Press, many of its reporters, including Michael Biesecker, and many of the wire service's colleagues at other press outlets are coming off as extraordinarily determined bullies who instantly morph into childish whiners when they're on the receiving end of legitimate and justifiably harsh criticism.

The more measured AP report from Florida mentioned in this post's introduction could be a sign that the wire service has learned something. We'll see. Readers are advised not to get their hopes up.