It's no secret that the establishment press's pro-abortion posture is so strong and pervasive that one wonders if supporting it is a job prerequisite. One clear manifestation of that is how journalists treat attempts to regulate conduct and disclosure at abortion clinics with outraged hysteria, while ignoring attempts to silence and marginalize pro-life groups attempting to show pregnant women that there is an alternative to eliminating the unborn lives they are carrying.

The Associated Press is especially experienced in engaging in this double standard.

In June, the AP made a national story (found at the APNews.com national web site) out of a law in Kansas. The writeup implicitly mocked lawmakers who passed the law and the governor who signed it by concentrating on one of its relatively trivial elements (presented in full because of its brevity and for fair use and discussion purposes):

Rather than describe the law as a disclosure requirement with an accompanying waiting period (which was already in place anyway), the AP's headline chose to focus on its font requirement without even telling readers what the law was about.

The unnamed AP reporter's opening paragraph repeated and detailed the font requirement, which is a common element of many disclosure laws regulating to, among many other things, workplace bulletin board messages and safety signage and highway signs. Additional research into other reporting on the status of this law as it made its way through the state legislature indicates a near-obsession with reporting on the font requirement.

The need for such a law enabling pregnant mothers to at least know something about the disciplinary record of the doctor who is about to end their unborn baby's life is obvious once one looks through the Kansas-related stories regularly chronicled at Operation Rescue and other pro-life websites. One current matter involves a third-time revocation of "the medical license of an abortionist who once kept dangerously shoddy records and provided dubious mental health justification for women – including girls as young as 10 – to get late-term abortions ..." 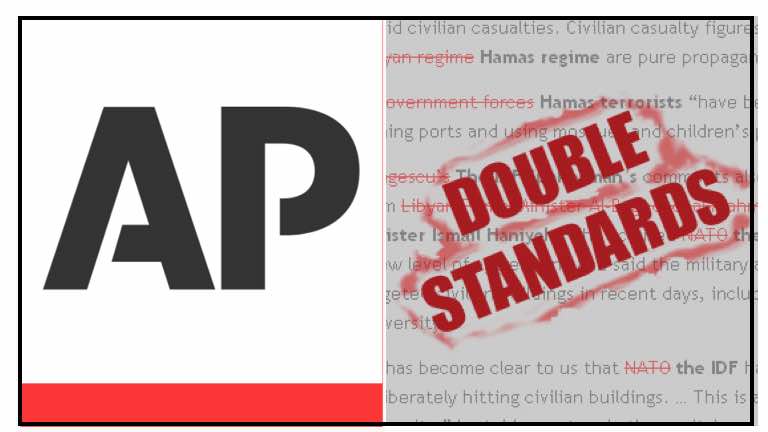 The AP story's correction seen above would seem to indicate that the reporter involved accepted a proabortion group's press release or statement on what the law would do without determining the law's actual content. In mid-March, pro-life groups' disclosure proposal involved "the year the doctor graduated from medical school, the date employment started at the clinic, state of residency, status of malpractice insurance, hospital privileges and interaction with state medical regulators," and not the specific medical school or the doctor's age as the wire service story above originally reported.

Let's contrast how the AP treated June's story out of Kansas with a more recent development in Seattle, Washington's King County.

In this case, a county board decided that it needed to force a labeling requirement on crisis pregnancy centers.

The AP only treated this news as a regional story.

What the county Board of Health did is likely just an opening attempt to marginalize those who want to counsel expectant mothers in difficult situations and provide them access or referrals to prenatal care — something Planned Parenthood has been shown to rarely do. The AP story involved clearly took the Board's side:

Note that the regulation has a font-size requirement which happens to be four times larger than the one involved in the Kansas law described earlier (yes, Kansas's law has to do with what's on paper, and King County's involves signage). Yet the AP didn't headline or obsess over this font-size requirement at all. The double standard could hardly be more obvious.

The Board has mandated a $100 per day penalty for failure to comply; no financial penalty was identified in AP's coverage of the Kansas law, likely because there isn't one.

In this story, the AP's headline writer and the story's reporter wouldn't even allow the words "crisis pregnancy centers" to appear without including scare quotes which explicitly question the term's legitimacy — even though there are at least nine national networks of honest-to-goodness crisis pregnancy centers.

Here's what crisis pregnancy centers do:

You ... can likely find a crisis pregnancy center near you in the yellow pages of your local phonebook (e.g., under "Abortion Alternatives" or "Pregnancy Counseling").

The supposed need for this regulation was an investigation by undercover "trained volunteer college and law students" claiming that "the centers give medically inaccurate information about abortion and some don't tell patients that they don't provide abortions or make referrals involving abortion and contraception."

Care Net of Puget Sound, which has six crisis pregnancy centers in the region and is mentioned in the AP report, blasted that contention as "an absolute lie." Of course they don't provide abortions (and I'm sure they clearly tell patients that), and of course, as pro-life-driven, they won't make such referrals. The obvious question about this "investigation" should be: Where's the James O'Keefe-level video proof, with all the raw footage? (The unsurprising answer will be seen shortly.)

In later paragraphs, the AP's unnamed reporter hyperventilated over the fact that Care Net "offers 'life-affirming' resources" and had a "prayer team" which is especially concerned with praying for the "very abortion-minded."

As to the specific labeling requirement, as Jay Hobbs at LifeNews.com noted on Monday, the Board is legally forcing crisis pregnancy centers to lie — and, as I suspected earlier, it trusted the aforementioned "investigation" without examining it in any detail:

In the past year, Care Net of Puget Sound—a state-licensed medical provider based in Seattle—contributed over $6 million worth of services to its community at zero cost to taxpayers.

Despite Care Net’s clear medical nature—the organization offers ultrasounds and free STD/STI testing at no cost to clients or taxpayers—the new distinction from King County’s Board of Health has everything to do with what they don’t offer: abortion.

... no King Board of Health officials have visited pregnancy centers to educate themselves on the subject—and only three board members are medical professionals, including one dentist, an environmental health professor and a health clinic worker—the group relied exclusively on undocumented testimony from pro-abortion groups including NARAL Pro-Choice America and Legal Voice.

While we're in that neighborhood, let make it clear that abortion — Planned Parenthood's primary business, no matter how often and how stridently the organization and its apologists continue to misrepresent it — is not health care. As a practicing physician succinctly put it to me a couple of years ago: Abortion "is only 'healthcare' if you think pregnancy is a 'disease.'" The group which actually has no genuine right to describe its facilities as "health care clinics" is Planned Parenthood. Most of its facilities won't even let pregnant mothers see their unborn babies' ultrasounds. Oh, but PP does use ultrasounds — as one facility's representative put it, "to see how far along the, um, patient is." The "patient" is the child targeted for an abortion.

Searches on "Puget" at the AP's main national site and at its APNews.com site both returned no stories relating to the King County Board of Health's action.

It appears that any attempt to regulate abortion is a reason for the AP to try to create national hysteria, while the wire service is determined to keep any attempt to silence or curb pro-life efforts as quiet as possible.