On Friday, a lawyer for the New York Times, arguing before a Manhattan federal judge, claimed that the paper made "an honest mistake in posting the editorial" claiming that Sarah Palin directly incited the shooting of Arizona Congresswoman Gabby Giffords in 2011.

The establishment press, apparently more interested in protecting the viability of one of its more important gatekeeping bastions with silence than it is in subjecting it to the ridicule and outrage it deserves — regardless of the results of the libel case Palin has brought — has almost totally ignored Friday's proceedings.

As trial lawyer John Hinderaker at Powerline noted on Saturday, the "honest mistake" posture means that the opinion writers' defense "likely will have to be that they don’t read their own newspaper."

As will eventually be seen in this post, it also likely means that they supposedly don't recall their own editorials.

A Google News search on [Sarah Palin New York Times "honest mistake"] (typed exactly as indicated between brackets, during past week, sorted by date), done Tuesday afternoon shortly after 3 p.m. Eastern Time, returned only 17 results. All but five are from center-right blogs and outlets.

One of those five is from the Courthouse News Service, which noted the Times's novel defense that, in the service's words, "the original version of the editorial barely remained on the website for half a day."

How quaint. The editorial in its original form, claiming that Palin’s incitement of the 2011 Giffords shooting was "clear" and "direct," made it into the paper's June 15 print edition (daily circulation as of a year ago: 590,000), and will be present in dead-tree form in libraries, cluttered offices and dens, musty basements and perhaps digitally in certain public library and research databases throughout the land indefinitely.

The two corrections made to the editorial were posted in the paper's Saturday, June 16 print edition — but, as seen here, not in its customary list of daily corrections. Instead, as seen below, the corrections, presented as if they represented a single correction, appeared at the bottom of that day's editorial page in fine print (click here or on the graphic below for a larger view in a separate tab or window):

Of the four remaining Google News results returned, the New York Post and the Washington Times both lean right, and are usually seen as outsiders. Only coverage seen at Newsday and a one-paragraph squib at Bloomberg News's relatively obscure Big Law Business site can be described as coming from the establishment press.

The print-edition saga above appears to contradict a claim the Times made as reported in Newsday's July 7 story, which is the sole instance of full left-leaning legacy media coverage I was able to locate in the aforementioned mid-afternoon Tuesday search (bolds are mine throughout this post; second ellipse is in original):

... “There was an honest mistake in posting the editorial,” said Times lawyer David Schulz. “It was corrected within 12 or 13 hours ... So there’s no evidence that there was a knowing intent to put out misinformation.”

The lawsuit focuses on a June 14 Times editorial (published in the June 15 print edition) in the wake of the shooting of Rep. Steve Scalise. It cited a map circulated by a Palin political committee targeting Giffords’ district with crosshairs over the congresswoman, and claimed “political incitement” by the former GOP vice-presidential nominee was behind the shooting.

But there has never been evidence that shooter Jared Loughner, whose focus on Giffords predated Palin’s map, ever saw it, and the crosshairs were over Giffords’ district — not her face. The Times ran a correction, but not an apology.

As to the argument concerning "a knowing intent to put out misinformation," the Times's June 16 print edition treatment of its corrections — keeping them out of its regular daily list of corrections and virtually hiding them at the bottom of that day's editorial page — would appear to betray a "knowing intent" to minimize its attempts to correct the record in the minds of print readers.

Newsday reporter John Riley also drew an important distinction between reality and the Times's post-corrections editorial. As seen above, Riley noted that in six years there has "never been evidence" that Jared Loughner ever saw the Palin PAC's "crosshairs" map. One key portion of the corrected Times editorial, seen here, only admits that "no connection (between the map and Loughner's shooting of Giffords and murder of six others) was ever established."

A fair reading of the Times's final take is that it is that there was at least some evidence of a "connection," despite Riley's correct assertion at Newsday that "there has never been." Thus, Palin's name and the crosshairs map remained in the editorial because the Times is keeping hope alive that a genuine connection may someday be established.

That's certainly how several prominent pundits saw things in tweets published shortly after the final version of the editorial appeared online. The best characterization of the paper's position was tweeted by Iowahawk: "I guess our blood libel was wrong, but we'll just keep it in here anyway just in case."

It's also important to note that Riley's observation that "The Times ran a correction, but not an apology" is correct, if by "ran" one means "included in its official online and/or print editions of the newspaper." While the Times tweeted an apology on June 15, it hardly suffices in the circumstances. It also appears to contain the paper's opening line of defense in the Palin libel suit:

We're sorry about this and we appreciate that our readers called us on the mistake. We've corrected the editorial.

When it pawned credit off to its readers, the Times began its "honest mistake" attempt to make the court in the Palin lawsuit believe three individually and collectively impossible things.

First: "We're too stupid to remember the conclusions reached about Loughner's motivations reached six years ago in numerous stories by our own reporters." A search at the Times on "Giffords Arizona" (not in quotes) indicates that it published over 110 items related to the Giffords shooting between January 10 and January 18, 2011.

Second: "We're also too stupid to read reiterations of those conclusions published by columnists in our own newspaper spread over the past six years, up to and including the day after the assassination attempt on Louisiana Congressman Steve Scalise in June of this year."

Third, and arguably most damning: "We're also too stupid to remember statements we published in a house editorial the day after the January 8, 2011 Giffords shooting, which is also the day after the Palin-crosshairs smear first appeared" (January 9 online for January 10 print edition; full editorial here):

This 2011 editorial appeared after the Palin-crosshairs smear was already underway and had already been largely discredited.

More than 24 hours later, in their editorial released on the evening of January 9, the opinion writers at the Times, in the passages excerpted above, vaguely but nonetheless substantively discredited the left-driven smears which almost immediately appeared after the Giffords shooting. Based on its pre-editorial appearance, that would likely include the Palin smear the paper's opinion writers actively adopted and promoted as an established fact six years later. 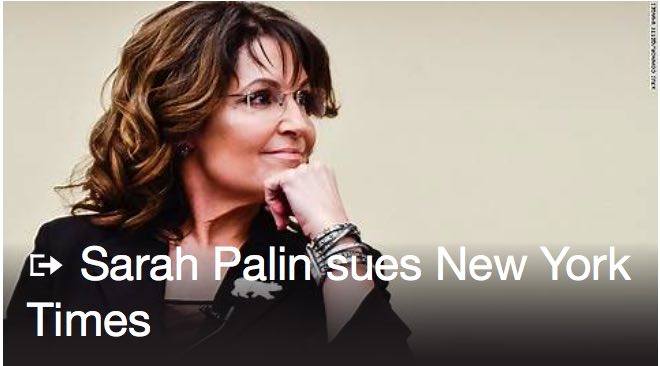 Now the Times is tasked with trying to convince a federal court that they have persisted for six years in "honestly" and "mistakenly" placing more faith in a far-left, fever-swamp Internet conspiracy theory which has no supporting evidence than in their paper's own reporting, in its own columnists, and in their original 2011 house editorial — which, as noted, seems to have initially discredited the Palin smear.

And a judge and/or jury are supposed to believe all of that?

THE NEW YORK TIMES IS IN TROUBLE

... The “actual malice” standard that applies to defamation cases brought by public figures is often considered to be impossibly high. It has little to do with the usual meaning of the word “malice.” Rather, it requires that a defendant publish a statement that he knows to be false, or about which he has no idea whether it is true or not, and publishes it anyway (“reckless disregard”). Sarah Palin’s lawsuit against the Times is the rare case where it is hard to see how the paper will be able to mount a defense.

If so, and if the Times loses — not at all assured even if the merits are there because, as Hinderaker notes, the case is being heard in Manhattan — it would appear that the paper's wounds have been entirely self-inflicted.