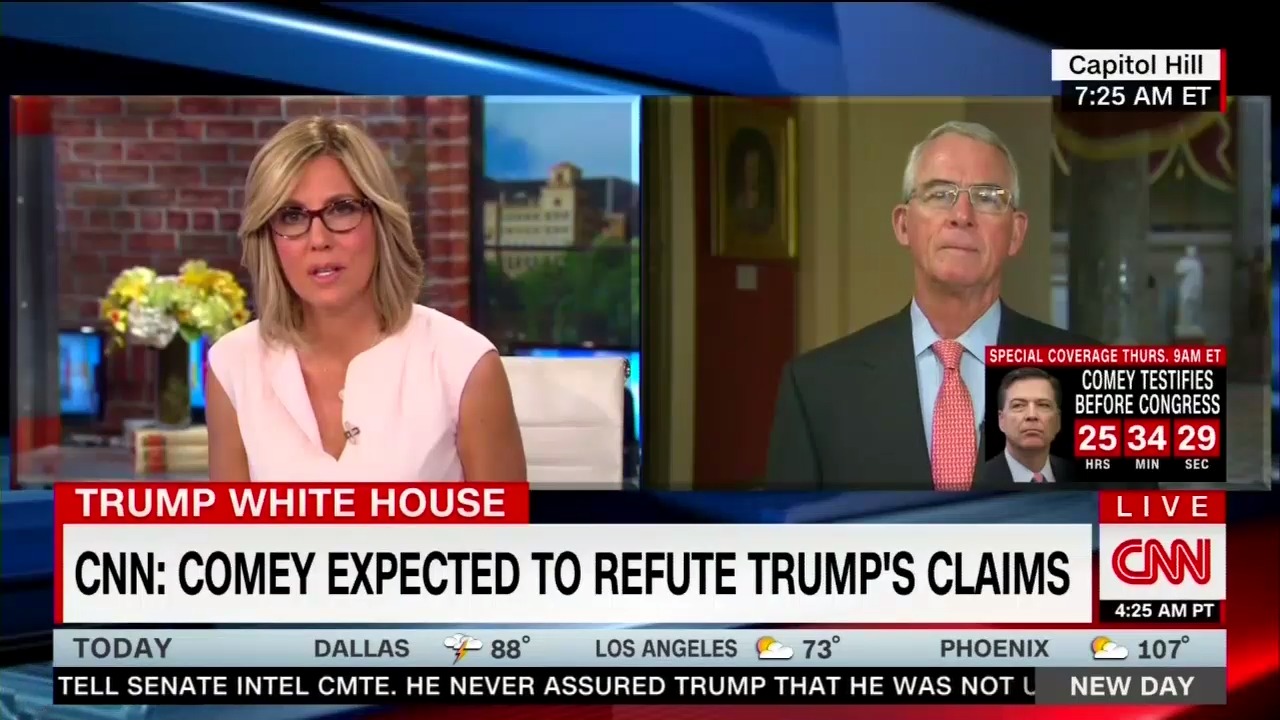 CNN apparently sees part of its mission as putting out weakly sourced, anonymous and likely untrue information when it makes President Donald Trump look bad, and then weakly  "correcting" it with no apologies when the truth becomes known.

A particularly egregious example of this occurred Tuesday when the network published a story and broadcast video segments declaring that former FBI Director James Comey would "refute" Trump's claim that Comey told him three times that he was not under investigation.

These days, it's hard to say that any particular establishment press offense tops all the others, but this one is certainly in the upper echelon.

Tuesday's CNN claim was unmistakable, and if true, would certainly have been problematic for Trump. Wednesday's "correction" doesn't even genuinely admit that the original story ended up being so wrong that any reasonable person would wonder why it was ever published and aired.

Here are the opening paragraphs of Tuesday's original, which is fortunately still available at the websites of several CNN-subscribing local TV stations, including WTVR in Richmond, Virginia (bolds are mine throughout this post):

In his much-anticipated congressional testimony on Thursday, fired FBI Director James Comey will dispute President Donald Trump’s interpretation of their conversations, according to sources familiar with Comey’s thinking.

Trump has made a blanket claim that Comey told him multiple times that he was not under investigation.

But one source said Comey is expected to explain to senators that those were much more nuanced conversations from which Trump concluded that he was not under investigation. Another source hinted that the President may have misunderstood the exact meaning of Comey’s words, especially regarding the FBI’s ongoing counterintelligence investigation.

In his letter to Comey firing him, Trump raised the Russia investigation and asserted that: “... I greatly appreciate you informing me, on three separate occasions, that I am not under investigation.” The White House has not provided details of when those three conversations allegedly took place.

The network's original report at its own website was replaced Wednesday by its "correction." However, until Wednesday afternoon, CNN's original video discussion with the claim that Comey would "refute" Trump was still present. That video has since finally been replaced. A related video found here shows a CNN panel on Don Lemon's Tuesday evening show discussing the matter, with viewers being shown a chyron description claiming "COMEY TO TESTIFY TRUMP MISINTERPRETED HIS CONVERSATIONS WITH HIM" during most of the segment:

Now let's look at what CNN calls a "correction," followed by the first few paragraphs of the story which replaced the original. The bolded text below highlights where CNN's "correction" failed to genuinely acknowledge that its original story was absolutely incorrect:

Comey unlikely to judge on obstruction

CORRECTION AND UPDATE: This article was published before Comey released his prepared opening statement. The article and headline have been corrected to reflect that Comey does not directly dispute that Trump was told multiple times he was not under investigation in his prepared testimony released after this story was published.

In his much-anticipated congressional testimony on Thursday, fired FBI Director James Comey is not likely to offer his conclusion about whether the President obstructed justice regarding the agency's Russia investigation, according to a source with knowledge of Comey's testimony.

Rather, this source says, Comey plans to present himself as a "fact witness" by simply describing the interactions with the President on multiple occasions that made him uneasy enough to memorialize their conversations. He "will leave the legal analysis for others," a source tells CNN.

While Comey is anxious to recount his version of his conversations with the President, he also appears likely to sidestep questions about how he felt about Trump's comment -- for instance, whether he felt pressured to drop the investigation or whether he thought they amounted to obstruction, another source said.

An earlier version of this story said that Comey would dispute Trump's interpretation of their conversations. But based on his prepared remarks, Comey outlines three conversations with the President in which he told Trump he was not personally under investigation.

I hate to break it to the folks at CNN, but Comey's identification of "three conversations" confirms what Trump originally claimed in his letter firing Comey.

Apparently, as has been seen in so many other instances during the presidential campaign, the post-election transition and the early month's of Trump's presidency, there's an ironclad rule at CNN and other establishment press outlets against using the following three words in succession: "Trump was right."

There is also apparently a rule against apologizing to those who were originally misled or even expressing any form of sincere regret. Absent such an expression, and especially given the weaselly language of CNN's "correction," readers can be forgiven for believing that this absence is due to the fact that no one at the network is genuinely sorry for having misled its viewers and readers.

For those who want to see a full comparison of CNN's original story and the one which replaced it, I have produced a side-by-side comparison of both (posted for future reference, fair use, and discussion purposes).