Shortly after the U.S. military dropped a MOAB (Mother Of All Bombs) on an ISIS tunnel complex in Nangahar Province in Afghanistan, the media began citing the alleged costs involved. The exaggerations, some by a factor of over 1,000, even after considering all of the mission's likely direct costs, were laughably wild, and resulted from a combination of sloppy thinking and ignorant reporting.

The original Thursday coverage at the New York Times by reporters Helene Cooper and Mujib Mashal made it appear to the casual reader as if their quoted costs came from the military (bolds are mine throughout this post):

Thursday’s strike in Afghanistan — using a 20,000-pound bomb that cost $16 million, and more than $300 million to develop — hit a tunnel complex in the Achin district of Nangarhar Province, according to a statement from the United States military in Afghanistan.

To the surprise of no one familiar with the Old Gray Lady's slippery ways, the U.S. military's statement on the strike did not cite any cost figure.

Other establishment press outlets initially ran with single-bomb cost figures north of $300 million, leading to a Twitterstorm of complaints about how that money could have been better spent here at home. Examples:

"Trump just blew up a 314 million #MOAB in #Afghanistan while gutting social programs like any red blooded sociopath would."

(from a Florida University professor) "The Moab bomb cost $ 314 million. They could have been alternatively allocated to research, healthcare or education."

Aerospace giant Boeing Co. has delivered the first batch of 30,000-pound bombs, each nearly five tons heavier than anything else in the military's arsenal, to the U.S. Air Force to pulverize underground enemy hide-outs.

At a total cost of about $314 million, the military has developed and ordered 20 of the GPS-guided bombs, called Massive Ordnance Penetrators.

As a result, many outlets "corrected" their stories to reflect a unit cost of $16 million.

But the bombs discussed in the story's early paragraphs weren't MOABs, as a later paragraph in that same story indicated: 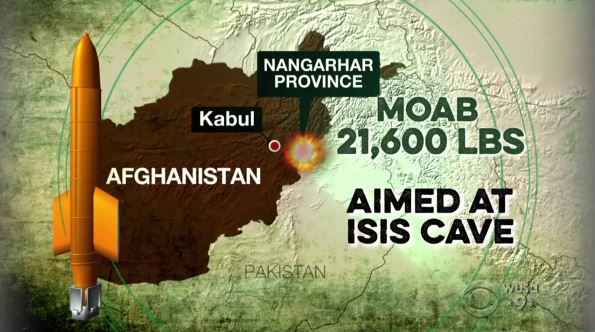 The weapon's explosive power is 10 times greater than its bunker-buster predecessor, the BLU-109. And it is nearly five tons heavier than the 22,600-pound GBU-43 MOAB surface bomb, sometimes called the "mother of all bombs."

Surprise. A "Massive Ordinance Penetrator," designed to be a bunker-buster exploding on impact, is not the same as the MOAB, which explodes above the ground.

So what is the real cost of the MOAB? According to a report carried at Business Insider, based on a discussion with an Air Force official, it's — well, just read on:

The weapon, whose acronym inspired the nickname "Mother of All Bombs," was produced by the Air Force, not by a third party like Lockheed or Boeing, "so we don't have a standard procurement cost associated with them," an Air Force official said.

Many outlets, including The New York Times and Business Insider, inaccurately stated the cost of the MOAB as being in the millions. Business Insider's article has since been corrected to reflect this information.

By contrast, the claims at the New York Times that the MOAB itself cost $16 million and that development costs were "more than $300 million" had not been corrected as of 4 p.m. Eastern Time on Sunday.

It should be obvious that the actual $170,000 cost wouldn't make anything resembling a dent in the federal government's multibillion-dollar social programs, or its research, healthcare, or education the leftist tweeters above cited. It would only fund 0.08 percent of the year-ago estimated $216 million cost of fixing Flint, Michigan's water system.

But what about that $300 million in development costs? Assuming that the figure is even valid — I could not find any evidence that it is — shouldn't those costs be included? Absolutely not.

The video seen at the Times story reveals something quite important that "strangely" (no, not really) didn't make it into the Cooper's and Mashal's print story:

The Air Force developed the MOAB in 2002 and 2003 as part of the Iraq War's shock-and-awe strategy. It produced 14 of these bombs, two of which were shipped to the Persian Gulf. But by the time they arrived, officials decided they no longer needed to deploy such massive force.

So if $300 million was really spent to develop the MOAB — separate from the cost of the materials, labor, factory overhead and explosives involved in production — it took place 14-15 years ago. Deciding not to use the MOAB last week wouldn't have gotten any of that money back to spend in other areas.

Beyond that, the fact that the MOAB was developed as part of shock-and-awe would seem to indicate that the $300 million (again, if that's even a valid number) was spread over several weapons development efforts. If so, it would be incorrect to assign the entire cost to MOAB.

There were other marginal costs involved in the mission beyond the $170,000 the Air Force cited, but they would seem to be small. The troops are already deployed, so there would be no additional personnel, infrastructure or logistics costs, leaving only the fuel it took to conduct the mission and the wear and tear on the plane involved (or planes/jets, if the cargo plane with the MOAB had an escort).

Increasing the Air Force's cited cost to $300,000 for these factors would seem to be a stretch. But if we use that figure, it means that the press initially overstated the attack's total cost, first by a factor of over 1,000 (over $300 million divided by $300,000). Then in many (but not all) cases, it "corrected" the overstatement to over 50 times actual ($16 million divided by $300,000). Finally some (but far from all) outlets are coming around to the Air Force's figure — or doing their level best to pretend they never reported a cost figure in the first place. As to the New York Times, its errors stand uncorrected.

In light of embarrassments like this, it would be nice if we could once and for all be spared all of the tired lectures about "fake news."