Donald Trump-directed assassination chic has hit a critical, and apparently critically accepted, mass. Middle-aged, extremely wealthy misogynist rap "artist" Snoop Dogg, a pioneer in the genre who has millions of followers, has produced a video which portrays President Trump as a pot smoking clown whom Snoop Dogg "shoots" while saying, "One shot, one kill."

As of early Wednesday morning, the video had over 2.2 million views.

The Associated Press has done an unbylined story which tries to come off as neutral — but in doing so ends up being virtually promotional — while the fawning entertainment press is treating the song, its lyrics, and accompanying video as if they're just another creatively produced "parody."

Here's the full AP story, which avoids commenting or soliciting comments from anyone, pro or con, about the nature of the video or the song's lyrics:

Gosh, the only thing missing is a direct YouTube link. (Readers certainly won't find that link in this post.)

The Associated Press is supposed to be a news service, with journalists who can readily identify controversial material and solicit comments from informed observers. Instead, the AP just pushed out a blurb blandly describing the video as if depicting someone who "shoots at Trump" is just another artistic effort.

The entertainment press's sympathetic, supportive reaction has been appalling.

Here's Billboard, the music industry's de facto mouthpiece (links are in original; bolds are mine throughout this post):

Snoop Dogg on 'Lavender' Video Parodying Trump: 'Nobody's Dealing With the Real Issue With This F--king Clown as President' 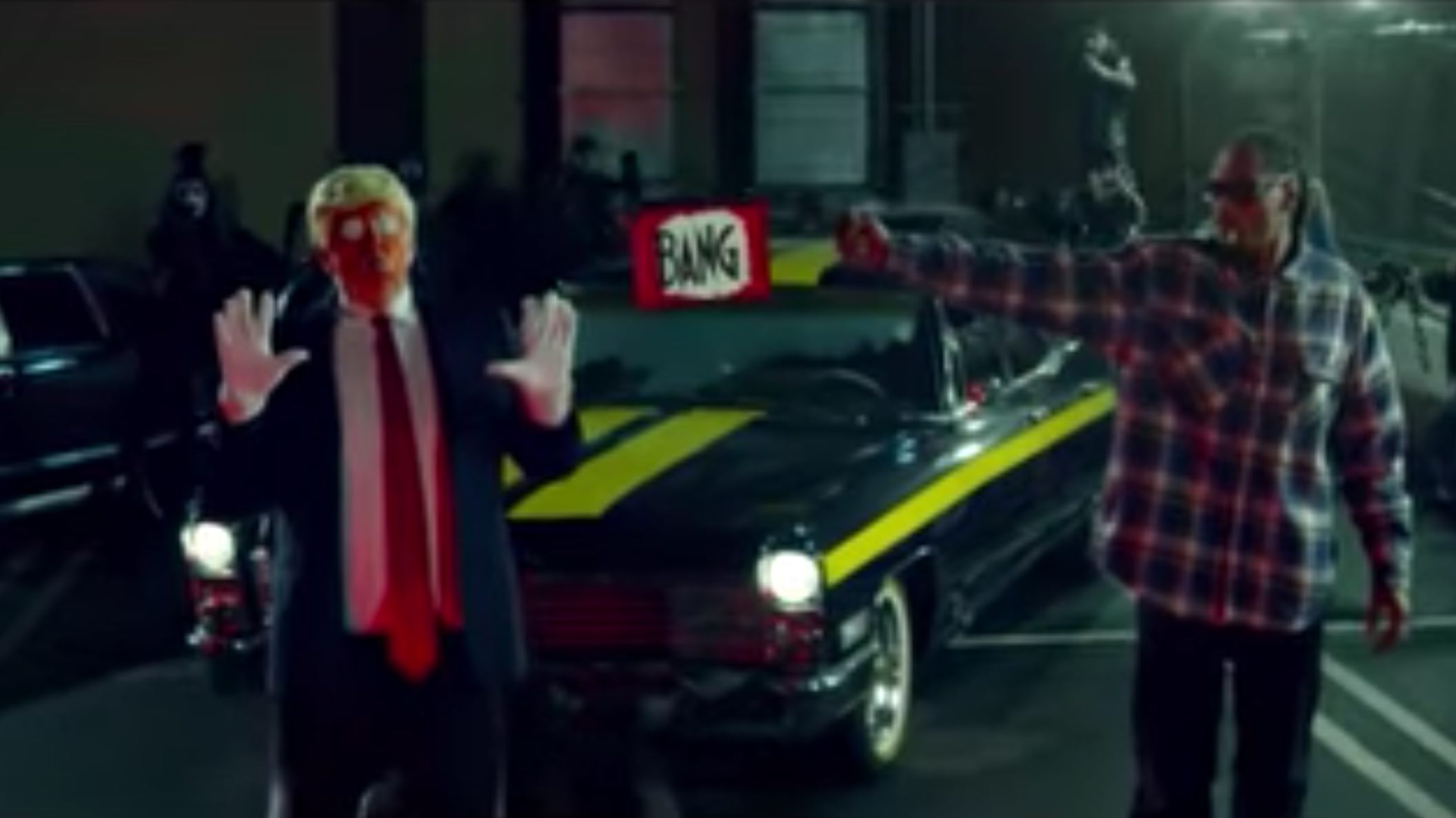 ... The video, which dropped March 12 on Wellens' Prankvsprank YouTube page and was co-helmed by esteemed music video director James DeFina, also features a parody clown version of president Donald Trump named Ronald Klump. The clip is a satirical look at current events, with Clown-in-Chief Klump even holding a press conference to announce the deportation of all dogs. Actor Michael Rapaport steps in as the father (also a clown), who smokes weed to alleviate his stress, and is ultimately shot dead with a glitter gun by clown cops.

... Last July, he (Snoop Dogg) and fellow West Coast MC The Game led a peaceful march to the Los Angeles Police Department to spark dialog in the midst of the violent sniper shootings that took place in Dallas. Those shootings occurred during a protest in response to the deaths of Castile and Alton Sterling, a man who died in Baton Rouge in a police-related killing.

When asked what was going through his mind as he wrote the song, Snoop says he was "making a song that was not controversial but real -- real to the voice of the people who don’t have a voice. It’s not like [Jesse] told me to make a record to express what I’m expressing on the song, but there were certain things that he said that brought that feeling, to make me want to express that when I was writing."

Let's look at what Adelle Platon at Billboard did in the second excerpted paragraph.

She called Micah Johnson's assassination of five white cops in Dallas "violent sniper shootings." She didn't even acknowledge that any deaths occurred, let alone that those who died were cops. Those who missed what happened in July of last year could read this paragraph and believe that it was protesters alone who were shot. The inclusion of a link doesn't relieve the writer from correctly describing the underlying event. But Platon made darned sure readers know that Philando Castile and Alton Sterling died "in a police-related killing."

Platon retweeted a Billboard tweet that "@SnoopDogg joins the ranks of @Eminem, @Madonna & more with presidential parody music video." The tweet didn't mention the mock assassination — or, for that matter, in a second directly violent act, that someone off-camera hits Trump over the head at the presidential podium in a separate video scene.

Variety.com's Sarah Ahern wrote that "Snoop Dogg aims a toy gun at a clown dressed as President Donald Trump in his new video for 'Lavender,' a remix of the electro-psych song by BadBadNotGood and Kaytranada." She never mentions that Snoop Dogg shoots the gun.

At BET.com, the website of the cable channel, Kc Orcutt seems to admire Snoop Dogg's latest work, and lets readers know that there's a cottage industry of hate-rap going after the President:

Snoop Dogg, BADBADNOTGOOD and Kaytranada Debut Possibly the Most Anti-Trump Music Video We've Seen Yet
The satirical clip really takes it to a new level.

Throughout the entire duration of the election, it came as no surprise that a vast majority of the hip-hop community exercised a strong distaste for the president elect, Donald Trump.

With many taking to their music and social media platforms to advocate against the president, such a strong perspective hasn't changed all too much since Trump won the election. As songs like YG and Nipsey Hussle's "F**k Donald Trump" and Common's "Letter to the Free" among those directly discussing the current political climate, Snoop Dogg's rework of a BADBADNOTGOOD and Kaytranada track is the latest to join the ever-growing anti-Trump soundtrack.

As to the "new level" Orcutt cited, it really isn't, except that Snoop Dogg is the most prominent artist to "go there," as Paul Reznikoff at DigitalMusicNews.com noted:

Other rappers have made threats against the President. That includes Rick Ross, who rapped about killing Trump but didn’t face any criminal enforcement. Similarly, Big Sean free-styled about slashing President Trump’s throat with a box cutter, but faced little scrutiny (that we know of).

But Snoop Dogg is, by far, the most high-profile rapper to make a direct threat. And this is probably the most blatant and direct threat by a big-name rapper to date. All of which raises the stakes on a full-blown reaction among concerned Republicans and Trump backers.

Of particular interest is Section 871 of United States Code Title 18, Section 871. That statute classifies direct threats against a President as a Class E felony. The law specifically calls for enforcement against any individual that issues “any threat to take the life of, to kidnap, or to inflict bodily harm upon the President of the United States”.

Reznikoff is probably right, and unfortunately so, that only "Republicans and Trump backers" will be concerned about the potential of the video to inspire someone to carry out a shooting in real life.

It's obvious that a similar video production where President Barack Obama was the target would never have been allowed onto YouTube or any other commercial streaming service, let alone showered with sympathetic reviews. Virtually anyone who had a fleeting thought of doing such a thing would have been restrained by a sense of civility — something leftists in the artistic community preach but rarely genuinely practice when confronted by any sentiment with which they disagree — and the knowledge that the Secret Service would be paying them a visit in short order.

Gosh, I remember when Sarah Palin was sharply criticized in the press about seven years ago for merely putting "targets" on congressional districts where Republicans should direct their campaign and activist resources to defeat incumbent Democrats.

When will the left have the courage and integrity to denounce their own growing "climate of hate"? Or is allowing that climate to fester a conscious element of their "resistance" strategy?