On CNN's first airing of Believer, a six-part Sunday evening series described at People.com as a "spiritual adventures series" exploring "the world’s most fascinating faith-based groups," host Reza Aslan did his part to take the network's flagging reputation down even further as he (yes, really) ate part of a human brain.

Aslan, who was visiting a fringe, cannibalistic sect which claims to be part of the Hindu faith, says that he made it clear to viewers and online followers that the Aghori sect is "not representative of Hinduism,” but didn't address the real question, which is why he chose to feature it anyway.

During just the past several months, the network has caught flak for airing obviously fake news segments which don't pass the stench test, let alone the smell test, about (to name just a very few) illegal immigrants; false charges of intolerance towards transgenders; the origins of terrorist attacks; and reckless, baseless charges of anti-Semitism leveled at President Donald Trump during his presidential candidacy and during his presidential administration. It has also seen its audience fall behind that of MSNBC into third place in the cable news ratings race.

One would think, considering the network's current position and reputation, that it would be more careful. Additionally, one would hope that a religion writer like Aslan, given just six hours of airtime to educate his audience, would be trying to enlighten viewers about the beliefs and practices of genuinely fascinating religious groups instead of devoting inordinate time to an obviously small, uncivilized, unrepresentative and secret sect wanting to be seen as part of the world's third largest religion.

But no, and no. As Ben Guarino at the Washington Post reported on Monday (Warning: graphic descriptions are in the excerpt; bolds are mine):

(Note: He didn't just "showcase" them; he participated in them — Ed.)

Religion scholar Reza Aslan ate cooked human brain tissue with a group of cannibals in India during Sunday’s premiere of the new CNN show “Believer,” a documentary series about spirituality around the globe.

The outcry was immediate. Aslan, a Muslim who teaches creative writing at the University of California at Riverside, was accused of “Hinduphobia” and of mischaracterizing Hindus.

“With multiple reports of hate-fueled attacks against people of Indian origin from across the U.S., the show characterizes Hinduism as cannibalistic, which is a bizarre way of looking at the third largest religion in the world,” lobbyist group U.S. India Political Action Committees said in a statement, according to the Times of India.

In the episode, Aslan meets up with a sect of Indian religious nomads outside the city of Varanasi in the northern state of Uttar Pradesh. The Aghori, as they are known, reject the Hindu caste system and the notion of untouchables, and espouse that the distinction between purity and pollution is essentially meaningless. In the Aghori view, nothing can taint the human body, Aslan said.

“Kind of a profound thought. Also: A little bit gross,” said Aslan, whose bestselling books on religion include “Zealot: The Life and Times of Jesus of Nazareth.” 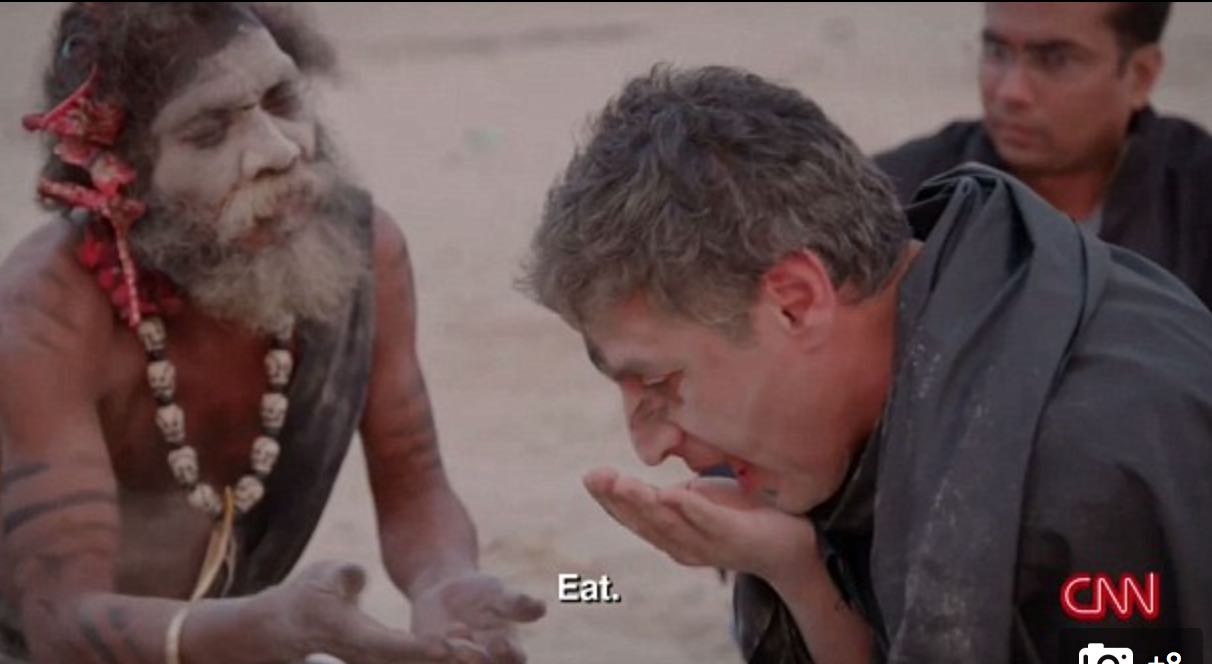 The Aghori persuade Aslan to bathe in the Ganges, a river that Hindus considers sacred. An Aghori guru smears the ashes of cremated humans on his face. And, at the Aghori’s invitation, Aslan drinks alcohol from a human skull and eats what was purported to be a bit of human brain.

“Want to know what a dead guy’s brain tastes like? Charcoal,” Aslan wrote on Facebook. “It was burnt to a crisp!”

At one point, the interview soured and one cannibal threatened Aslan: “I will cut off your head if you keep talking so much.” Aslan, in turn, said to his director, “I feel like this may have been a mistake.”

And when the guru began to eat his own waste and hurl it at Aslan and his camera crew, the CNN host scurried away.

I have found no evidence in several searches that the Associated Press has covered Aslan's outrageous enterprise. The New York Times previewed his effort as part of a story of Sunday's TV offerings as follows:

BELIEVER WITH REZA ASLAN 10 p.m. on CNN. Mr. Aslan, the author and religious scholar, doesn’t merely study the world’s faith-based customs in this new series. He lives them, starting with the Aghori, a Hindu sect in the holy city of Varanasi that encourages him to purify himself in the polluted Ganges.

I have found no evidence in several search that the Times followed up after Sunday's broadcast to better describe what it inadequately previewed.

CNN's current TV schedule shows that Believer will again air on Sunday, March 12 at 10 p.m. Eastern Time. The program's contents, unlike that of other programs scheduled for that evening, are "unknown."