This post was going to be about the establishment press's handling of the story of the mountainous and environmentally dangerous accumulation of trash left behind by Dakota Access Pipeline protesters. When the spring thaw arrives, that waste threatens to seriously pollute the Cannonball River — yes, the very river protesters are claiming they wish to protect from pipeline spills.

What's remarkable here, though, is what was found in an initial Google search on the topic. With all the coverage out there, Google has given pictorial prominence to item from an obscure, out-of-nowhere site which is a clear candidate for the "fake news" tag. That site's story bizarrely claims that even more trash is currently being brought into and dumped at the site — "to frame protesters."

The Associated Press uncharacteristically filed a fairly strong story on the environmental hazard on January 31, and mentioned the trash again in a timeline story (no longer present at AP's main national site) on February 3. The New York Times is relying on and posting AP content, but none of it appears to have landed in its print edition.

Here are key paragraphs from Blake Nicholson's January 31 AP story (bolds are mine throughout this post): 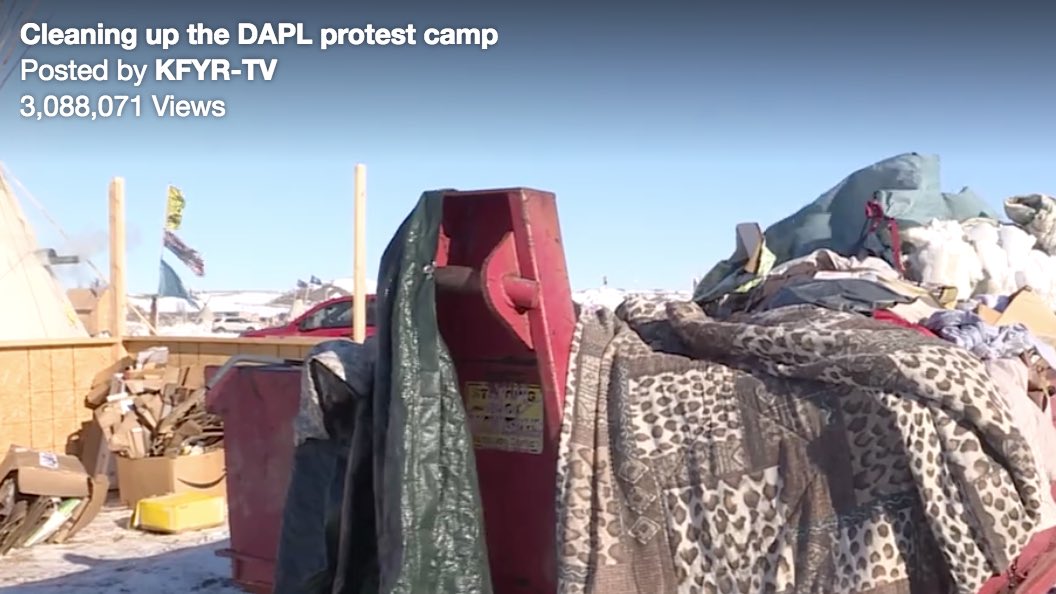 Cleanup of a North Dakota encampment where opponents of the Dakota Access oil pipeline stayed for months to protest the $3.8 billion project is expected to take weeks, a leader of the tribe that organized the protest said Tuesday.

The Standing Rock Sioux hopes to complete the work before any spring floodwaters from the Cannonball River can wash debris into the Missouri River - the very waterway pipeline opponents are working to protect. The camp has seen an exodus in recent weeks due to winter weather, pipeline work being stalled and the tribe's recent call for people to leave.

Protesters have left behind not just trash, but tents and even cars.

"There's more than anticipated, and it's under a lot of snow," Tribal Chairman Dave Archambault said. "I wouldn't say it's going to get done in days; it's going to take weeks."

The camp is close to where the Cannonball River flows into the Missouri, a water source for millions of people, including the tribe. Hundreds and sometimes thousands of people have camped there since August to protest a pipeline that they worry will threaten drinking water and Native American cultural sites.

... Minor flooding of the Cannonball River is almost certain this spring in the camp area, according to the National Weather Service's first flood outlook of the season, issued Friday. The next outlook, on Feb. 16, is expected to provide a clearer picture of potential flooding.

The only thing lacking in the AP report was an attempt to quantify the trash, and to be fair, it may not have been available. Now it is, as reported by West Dakota TV station:

... Sanitation crews are working hard to dispose of six months' worth of garbage from a community the size of Wahpeton or Valley City (2013 populations: 7,853 and 6,999 respectively — Ed.). The mountains of debris need to be moved before the spring thaw occurs.

A Google web search on "standing rock trash" (not in quotes) returned the following three items at the top. The one seen on the right deserves significant attention:

AlternativeMediaSyndicate.com has either been extraordinarily adept at gaining readers or is successfully fooling those involved in measuring legitimate web traffic. One would have to place their bets on the latter, as the site has gone from virtually zero traffic a month ago to one of the top 13,200 web sites in the U.S. The "Frame Protesters" entry has a comment form, but an attempt to submit a comment failed. The site's home page has no link to any page explaining who runs or owns AMS.com. Its Privacy Policy has "sample-page" in its URL, and its WhoIs entry is private.

The core of the AMS.com story is a claim made about incoming trash being dumped in a Tuesday video posted at the Facebook page of an activist. Several of the 500-plus commenters at the Facebook post have pointed out that the video doesn't show trucks entering or leaving the protest site, and that what is most likely happening are efforts at sorting through and organizing the trash. Oh, and there's the need to sift through through the trash for contraband and perhaps even dead bodies, as seen in a Washington Free Beacon story filed by NewsBusters alum Lachlan Markay.

The January 31 AP dispatch referenced above reports that "The tribe hasn't asked for help from the state or Morton County." So one has a hard time imagining how this alleged Morton County dumping could be occurring with Standing Rock's environmental protection agency on the job and "about 100" tribe members and others involved in the cleanup.

The point here is that this "framing the protesters" story has many telltale signs of being the very "fake news" that tech titans Google, Facebook and others claim they are trying to marginalize or eliminate.

Yet at the time of my search, the AMS.com story, with its uncorroborated left-inspired conspiracy theory, had achieved equal top-of-page pictorial prominence in the search seen above with the long-established Weekly Standard and Fuel Fix, a site that is "anchored by business reporters at the Houston Chronicle, the San Antonio Express-News and other Hearst newspapers," and whose story reports worries that protests in West Texas may generate similar environmental hazards.

How in the world could that have happened, unless Google has either negligently or deliberately allowed it to happen?